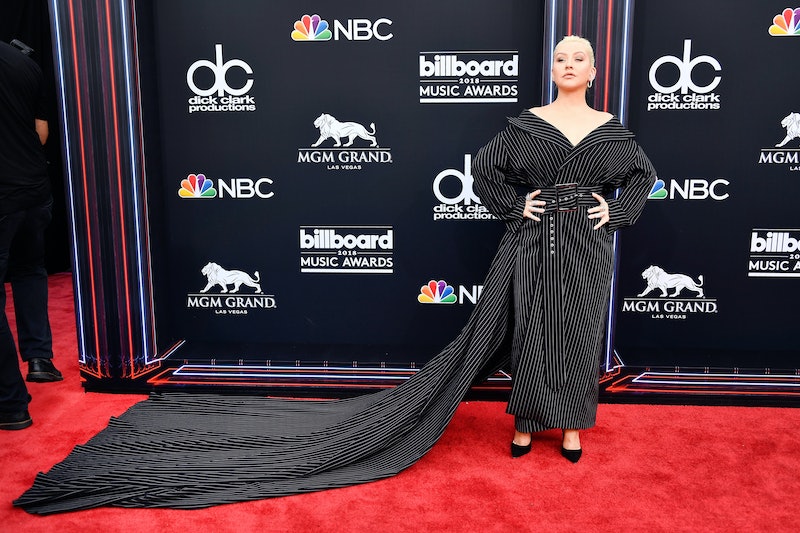 The 2018 Billboard Music Awards will broadcast live from the MGM Grand Garden Arena in Las Vegas this Sunday, May 20, at 8 p.m. ET / 5 p.m. PT on NBC. Just like BBMAs in years past, the show promises to be an entertaining celebration of music's finest chart-toppers — sure, plenty of gold statues will be given out, but there will also be a huge list of performances. Artists like Kelly Clarkson (who is also hosting the show), Salt-N-Pepa featuring En Vogue, Dua Lipa, John Legend, Ariana Grande, Jennifer Lopez, Macklemore, Kesha, BTS, Shawn Mendes, Khalid, Janet Jackson, Demi Lovato, and Christina Aguilera are all slated to take the stage.

That's not all the star power, either: In addition to the performers, the BBMAs presenters include Hailey Baldwin, Tyra Banks, Alison Brie, Ciara, The Chainsmokers, Mila Kunis, Jenna Dewan, Ashlee Simpson, and many, many more.

With such an impressive guest list, it's no surprise that the 2018 Billboard Music Awards red carpet was loaded with exciting fashion moments. If you're tuning in for the performances and awards, great — if you're tuning in for the fashion before and during the show, even better. Below, check out all the looks from the 2018 Billboard Music Awards, including some of your favorite BBMAs nominees.

More like this
Harry Styles’ Red Carpet Looks Have One Thing In Common
By El Hunt
15% Pledge Director LaToya Williams-Belfort On The Impact Of Supporting Black Business
By Dominique Norman
Bella Hadid's Best Runway Looks From Paris, Milan, & More
By Allie Fasanella
These Are Kylie Jenner's Best Paris Fashion Week Looks... So Far
By Dominique Norman
Get Even More From Bustle — Sign Up For The Newsletter