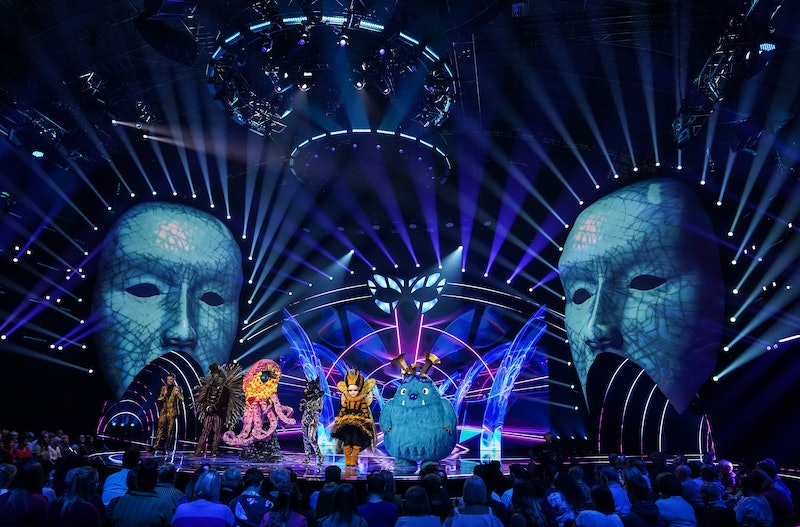 The grand final of The Masked Singer UK is upon us, and after weeks of intense speculation, the identities of all remaining disguised celebrities will finally be revealed. Over the past month, the competing celebs have taken to the stage and put on their very best vocal performances — and although many of the masked contestants have already been unveiled, viewers are yet to discover which famous faces lie behind this year's finalists. So, here are all the Masked Singer UK theories to know ahead of the final, because this epic guessing game is about to reach its long-awaited conclusion.

As the Metro reports, the Hedgehog, Octopus, and Queen Bee are now the only characters left standing, and each will battle it out to be crowned The Masked Singer UK champion during Saturday's final (Feb. 15). The line-up of 2020 finalists was announced during the eventful semi-final episode, during which TV presenter Denise van Outen and U.S. singer CeeLo Green were eliminated, and subsequently unmasked as the Fox and Monster, respectively. So, if you're itching to find out who else lies behind the eccentric Masked Singer costumes, here are all the best theories out currently there.

The Masked Singer’s Hedgehog has been a standout performer on the ITV series, having wowed the audience and judges with some show-stopping theatrical performances. Over the course of the series, the Hedgehog has given several clues as to who they might be, which appear to hint they're linked to a string of major West End shows, and are a total workaholic. As the Metro reports, these subtle suggestions have thrown some big names into the mix, including funnymen Billy Connolly, Jack Whitehall, and Jason Manford — the latter of whom has publicly denied his involvement.

However, perhaps the most plausible theory as to the Hedgehog's true identity is that West End star, Michael Ball, is the man behind the furry mask. Speculation first arose when the character was shown picking up a ball with the name "Michael" written on it — and if that wasn't proof enough, Ball himself has laid some pretty thick hints, most recently whilst appearing on The One Show, when he confessed to host Alex Jones that he "can be a little prickly."

Due to several rather impressive performances, the Octopus is one Masked Singer contestant who has fans convinced that they're familiar with strutting their stuff on stage. As the Radio Times reports, clues surrounding the Octopus' celebrity status include links to The Apprentice, the ITV soap Emmerdale, Australia, and more — which has of course brought on a flurry of fan theories, that so far centre around opera star Katherine Jenkins, Pussycat Doll Ashley Roberts, and Love Island host Laura Whitmore.

But the most exciting rumour to date is that pop princess Kylie Minogue, or perhaps sister Danni, could be the woman behind the elaborate costume. Although it might be farfetched, many of the clues certainly give this rumour some credence, and the judging panel are now convinced of Kylie's involvement in the show — but have they got this one right? We'll have to wait and see.

The Masked Singer's Queen Bee has become known for some truly stunning performances throughout her time on the ITV competition series, and if some fan theories are to be believed, her powerful vocal ability might've already given her true identity away. According to The Sun, many Little Mix fans have been sent into a frenzy over rumours which suggest Jesy Nelson, Perrie Edwards, Leigh-Anne Pinnock, or Jade Thirlwall could indeed be the secret celeb in question — whilst some have even suggested that Princess Beatrice has been the one buzzing around the Masked Singer stage week-on-week.

However, the vast majority of fans, and some of the judges, are convinced Girls Aloud singer Nicola Roberts is in fact the Queen Bee, especially after the character was shown playing the drums — which could be a nod to Roberts' debut song "Beat of My Drum."

So, will any of the fan theories and judges guesses turn out to be accurate? You can find out during the final of The Masked Singer UK, which airs Saturday, Feb. 15 at 7 p.m. on ITV1.