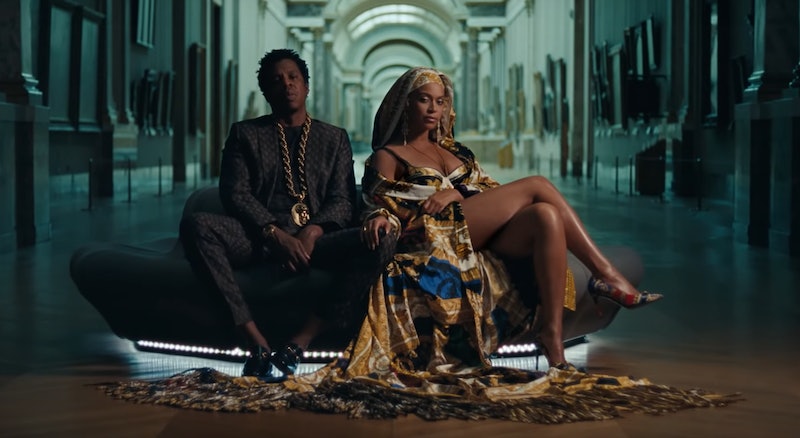 Well, my friends, Beyoncé has done it again. Not only did she completely shock her fans by releasing a surprise joint album with Jay-Z and rapping on the new track, but she killed it with the style too. All the outfits in Beyoncé's Apes**t video are so good that they deserve their own museum exhibit. There's everything from suits and sculpture-looking gowns to bra and legging sets.

If you thought the Lemonade visual album brought the fashion, just wait until you watch the Apes**t video. It begins and ends with a purple suit and all throughout the middle is even more incredible. Just like her running sartorial theme has been for some time now, Beyoncé draws a ton of fashion inspiration from religion as well as works of art. Which is appropriate, since, you know, the music video was shot in the Louvre and all.

When you pick the Luvre to shoot a music video in, you have to make sure the outfits are just as epic as the art surrounding you. Consider this your next lookbook of over the top outfits to be inspired by. There's epic matching headpieces and gowns, a nude corset, and even the small sunglass trend that the celebs have been rocking lately.

Honestly, no words can do all of these outfits justice. The six minute video shows off so many epic ensembles that you'll want to watch it on repeat for the next week. Not to mention the couples outfits are the perfect way to be match each other, while still showing off personal style.

Because there are so many outfits, they don't all get a whole lot of screen time. Here's a closer look at every single one, so that you can take all of the Beyoncé style goodness in. For the full effect, go ahead and play the above song while you browse.

As Beyoncé says in the song, "I've got expensive fabrics.," and she wan't lying.

Just in case you had an question as to who wears the pants in this family, Beyoncé start out the video both in pantsuits. The bright purple and blue give a major '70s vibe, but are extremely modern with the accessories.

The outfits were obviously carefully chosen for this shoot. Just look at the way Beyoncé's gown oh-so-perfectly mirrors the sculpture that she's standing in front of. She wears this dress for a few different shots in the video and it looks slightly different every single time. Just like a good work of art, it looks different from all angles.

There's no denying that this look is extremely religious. Although this is slightly more leggy than Mary's, the veil makes the inspiration noticeable at first glance. She does manage to make the outfit her own from the head-to-toe printed look. Not to mention Jay-Z's slightly pastoral all-black outfit.

The matching outfits continue with longline jackets. The two manage to rock similar styles while sticking to their own personal styles. Beyoncé and Jay Z bring in pops of color and neutrals for the video and do it flawlessly — pun intended.

Beyoncé even makes tim for a dance break with all her ladies in formation. While the dancer are outfitted in nude sets, she decides to go a little more bold with a Clueless-looking bring.

The video might be slightly more Beyoncé-fashion heavy, but Jay-Z rocks some killer looks as well. Like this all-white suit that he shows off for a second time in his verse of the song. Just look at that chain, people.

The pair take some time to shoot outfit of the Louvre as well. The dark scene features a whole lot of accessories in one shot.

Unlike the other shots, Beyoncé goes simplistic in this shot and let's her hubby have the more intense fashion moment.

The final shot, before going back to the bright colored suits, is this epic beaded bodysuit and matching bandana. This is by far the most intricate look in the entire video, and it's shame that it only gets a few seconds on-screen.

Yet another Beyoncé video that will go down in fashion history.