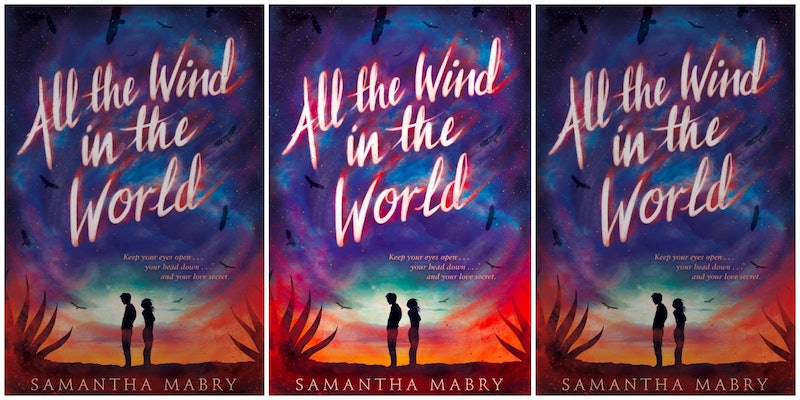 Samantha Mabry's magical realism YA debut A Fierce and Subtle Poison hit shelves in April 2016, and brought with it a world of strange legends and intense new love. Now she's back with another young adult book that combines enthralling passion, heart-pounding danger, and magic for a sweeping story of romance and redemption.

All The Wind in The World tells the story of Sarah Jacqueline Crow and James Holt who work in the vast maguey fields that span the bone-dry Southwest, a thirsty, infinite land that is both seductive and fearsome. In this rough, transient landscape, Sarah Jac and James have fallen in love. They’re tough and brave and they have big dreams. Soon they will save up enough money to go east. But until then, they keep their heads down, their muscles tensed, and above all, their love secret.

When a horrible accident forces Sarah Jac and James to start over on a new, possibly cursed ranch called The Real Marvelous, the delicate balance they’ve found begins to give way. And James and Sarah Jac will have to pay a frighteningly high price for their love. Filled with lush prose and a plot heavy on the dread, danger and romance, this dark magical realism novel will definitely appeal to fans Wink Poppy Midnight and Bone Gap.

Don't think you can hold off until October 10, 2017 to start immersing yourself in this world? You're in luck. Bustle is proud to exclusively reveal the cover and an excerpt from All The Wind in The World! See it all below:

The goal is to get to the heart:

Slash off the spines.

Sever the bulb from the roots.

Move down the row.

There are other steps to the maguey harvest, but I’m responsible for only those three. There are men who drive the trucks, and there are kids who jump down from the beds of those trucks to load up the hearts, which, once shorn of their spines, are the color of milk and roughly the size and shape of medicine balls. The hearts are then taken to factories by train, where they’re roasted and mashed until they produce a heavy, smoky-sweet liquid. That liquid, when distilled, becomes pulque, mescal, or, if you are rich, tequila as clear as a tear.

It’s morning. I’m on my way to the fields when I hear a whistle from a passing train. The sound hits the mountains and hums a ragged tune across the plain. We tell time by whistles: 7:10 in the morning westbound, 9:22 in the morning eastbound, 2:20 in the afternoon westbound. We know it takes ten minutes at a steady run to the south-southeast to get to those tracks from camp. We’ve timed it.

The truck I’m riding in starts to slow and pulls alongside several others just like it, all carrying beds crammed with workers. We clutch the long handles of our coas, hop down from the truck, and take our places in front of a row of spiky plants that seem to disappear in either direction into the orange-hued horizons.

A gust of wind comes through, carrying with it a strange smell: something like sulfur mixed with citrus fruit.

My heart lurches, then yanks itself back into place. James has snuck up behind me enough times in my life that he shouldn’t cause this kind of reaction, yet somehow he still does. I turn to see him standing no more than a foot away, his eyes glinting, much like the blade of his coa does in the desert sun. I can tell he’s worried about me, just on the edge of frustrated. When he gets this way—which is often enough—the brilliant, moss-green color of his eyes comes out.

“I thought maybe you wouldn’t make it out.”

We’re surrounded by other jimadors, so we’re talking in code. I’d rather we not be talking at all. I’d rather it be like last night late, when it was just the two of us on the outskirts of camp, out in the scrub grass under the harvest moon, when the only sounds coming from James’ mouth were the syllables of my name broken by sighs.

As usual, I woke up late, and, as a result, am stuck with a dull tool.

“The sun’s not even all the way up, but it looks like you’ve already run out of luck for the day,” he says. “I’ll trade you if you want.”

“Please,” I scoff. “I could cut more maguey than you with a butter knife.”

James laughs, which is wonderful. He does this automatic thing where he lowers his head and covers his mouth with his hand, like he’s embarrassed. He is embarrassed. There’s a scar at the left edge of his upper lip, the result of a dog biting him when he was a kid, way before we met. Whenever he laughs or smiles wide, his lip tugs up a little bit, like it’s being sewn with a needle. It’s hardly anything, but to James it’s conspicuous.

Sometimes I think that there’s so much sameness in the desert. The bunkhouses are the same peanut-shell color as the dirt. The dirt is the same color as the mountains. Most days, the sky is striking in its clear blue, but there are few birds that fly through it, and the ones that do are black. Our long days are reiterations of the long days that came before. It’s tough to tell young from old or man from woman because the desert has a way of erasing the things that make us each unique. Flying grit scrapes away at our faces. The wind tries to knock us flat, and the sun tries to bleach us, dry us out, and turn us into dust.

All the wind and dirt; it doesn’t scrape away at James. It polishes him to a shine. He’s alive out here. He stands taller. His eyes shine brighter.

I lean forward, as if to dive into those eyes. He leans forward, pretending to examine the nicks on my coa blade.

We’ve done a version of this thousands of times: hovering whisper-close to each other. But each time the feeling is new and thrilling, like snatching something from a store shelf or trying to outrun the rain.

Another whistle blows—this one just near my right ear and most certainly not from a train—and James and I fly apart.

More like this
Here's How Netflix Should Adapt Prince Harry's Memoir Into A Movie
By Ginny Hogan
Delia Cai’s Small-Town Romance Goes Beyond The Tropes
By Samantha Leach
Pamela Anderson Is Still A Hopeless Romantic
By Ilana Kaplan
The Plane Crash In 'Dear Edward' Is Based On A 2010 Tragedy
By Grace Wehniainen
Get Even More From Bustle — Sign Up For The Newsletter
From hair trends to relationship advice, our daily newsletter has everything you need to sound like a person who’s on TikTok, even if you aren’t.