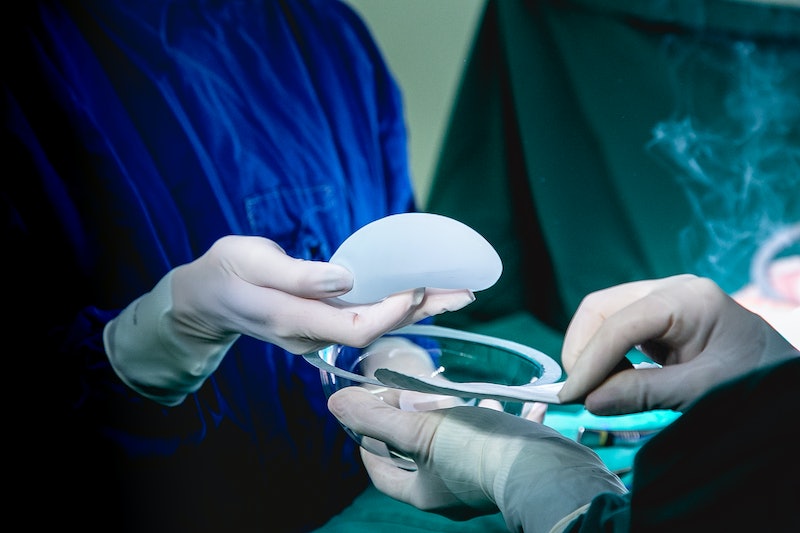 On Wednesday, Allergan, a pharmaceutical company based in Ireland, announced that its textured breast implants will be pulled off the market after the FDA requested a recall. New data showing a link between a rare type of cancer and Allergan textured breast implants prompted the move, which comes after 38 countries declared similar recalls, according to NBC. If you're at all concerned about what this could mean for you or someone you know, there are a few important points to keep in mind.

As NBC explained, an FDA assessment found that Allergan's textured implants — implants with non-smooth surfaces — are associated with an increased risk of a cancer called anaplastic large cell lymphoma, otherwise known as BIA-ALCL. The outlet added that the risk of textured implant recipients developing this cancer is around six times higher with Allergan's products as opposed to other textured implants.

If you have one of the three types of textured implants produced by Allergan, the FDA doesn't recommend having them removed if you don't have any symptoms associated with BIA-ALCL, the New York Times noted. Dr. Alan Matarasso, M.D., F.A.C.S., the Clinical Professor of Surgery at Hofstra University's Northwell School of Medicine and the president of the American Society of Plastic Surgeons (ASPS), echoes similar sentiments to Bustle. "Nobody's recommending prophylactic removal of the implant," he says.

Matarasso stresses that implant recipients "should follow the usual advice that they receive about their implants, which is periodic breast monitoring." In particular, Matarasso says you should " ... monitor the area, particularly around the implant, to look for any changes in the appearance or the feel. Or pain or swelling."

Matarasso tells Bustle that, if you do have a concern, you should " ... ideally see a board-certified plastic surgeon, ideally the person that put the implant in." However, if it isn't possible to see the doctor who initially performed your implant procedure, you can use the ASPS' website tool, called Match, to locate a board-certified plastic surgeon in your area, Matarasso says.

That being said, if you have these implants, it's important to know that the risk of developing BIA-ALCL is still quite low, according to the FDA. "Although the overall incidence of BIA-ALCL appears to be relatively low, once the evidence indicated that a specific manufacturer’s product appeared to be directly linked to significant patient harm, including death, the FDA took action to alert the firm to new evidence indicating a recall is warranted to protect women’s health,” FDA Principal Deputy Commissioner Dr. Amy Abernethy said in a statement to NBC.

Additionally, BIA-ALCL is treatable if caught early, according the the FDA, per NBC. “Most cases of breast implant-associated ALCL are treated by removal of the implant and the capsule surrounding the implant and some cases have been treated by chemotherapy and radiation," the organization said to the outlet back in 2017.

If you have breast implants and are not sure of the type or manufacturer, you can contact your health care provider to find out. You can also try using the National Breast Implant Registry (NBIR) to find out what types of implants you have, Matarasso suggests. As the doctor notes, the registry — which was launched in October 2018 — allows doctors to record the types of implants they use in their procedures and lets patients access this information later on. However, since this registry is fairly new, it's not a guarantee that information from your provider will be available.

Notably, textured implants are quite rare in the United States, making up just five percent of all implants in the country, Time noted. Matarasso says that the recalled Allergan implants were first used beginning in March 2000, which "offers a good barometer" in terms of assessing whether you could've received them as part of your implant procedure.

Overall, if you have textured implants that were manufactured by Allergan, it's important that you're aware of what the recall means and what symptoms are associated with BIA-ALCL. As is typical with any medical procedure, it's important to remain vigilant and informed, especially following the FDA's recent announcement.