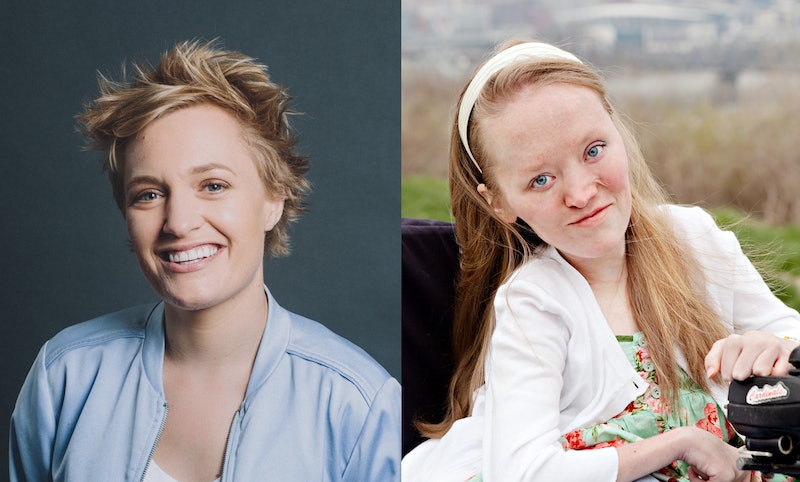 It's not easy being funny. Sure, having dozens of people keeled over in laughter while you're up on stage is amazing, but getting there isn't easy. It takes practice and, according to Ally Bruener, one of Bustle's Rule Breakers, being just a little bit of a smart-ass. Bruener uses her experiences living with muscular dystrophy to make people laugh at things they normally wouldn't, which is why she gleefully makes her tagline, "I laughed at the crippled girl."

As part of Bustle's September issue, we had Bruener chat with fellow Rule Breaker Emma Willmann, comedian and Crazy Ex-Girlfriend star, who has her own experiences with dyslexia and not "looking the part" for her comedy career. Ahead, read Bruener and Willmann's candid conversation about doing comedy, audience reception to their material, and identity.

Emma Willmann: Hey Ally. Where are you based out of?

AB: I am in Kentucky, in the middle of nowhere, right across the river from Ohio.

EW: I don't think I've done shows in Kentucky before, but I've done some stuff in Ohio.

AB: You're from Maine, right?

EW: I grew up in Maine and started doing comedy in Boston. Then I moved to New York, left for a year, went back to Boston (because New York is so intense), and came back five years ago.

AB: I was in New York once at a festival. The Devil Cup. I made it in the finals —

AB: It was a lot of fun. The audience is very different than around the Midwest.

EW: What's the main difference? I've got a theory on it.

AB: In New York, the audiences were a bit more picky. Once you've won them over, they were on your side. But they weren't as open to everybody. Around the Midwest, when the audience is already rooting for you, you don't have to prove yourself as much.

EW: I always feel like people have to get to it really quick. I did shows in Boston with local comics. They would do a 15-minute set, eight minutes would go by, and they wouldn't get a laugh. If that happened in New York, it'd be an uprising.

AB: Where I'm from, you have to be doing really badly before the audience turns against you.

EW: Were other comics friendly to you in the scene where you started?

There aren't a lot of people in wheelchairs on stage, much less women.

AB: I'm very lucky. When I started, everybody was so encouraging. I know it's kind of hit-or-miss, whether or not people are supportive. What about you?

EW: Boston was accepting, but I had a show at a casino two weeks ago, and they were some of the worst in my life, I was like, "Oh, I wonder if it's because I look different."

I started going on dates with a therapist, and she noticed. She was like, "Emma, every time it goes well, you say, 'Oh, that's a good audience,' but if it goes bad, you say, 'I look too weird. They can't relate to me.' You never get credit for how it goes." And I thought, "I gotta stop dating a therapist."

I always felt like maybe it's because they don't see a lot of people like me on stage, when really, it could have been a host of other things. Where is that in your head?

AB: It's something I'm always aware of. There aren't a lot of people in wheelchairs on stage, much less women, so they're kind of taken aback. I sometimes overcompensate by trying to humanize myself. I'm getting more analytical about my comedy lately, and I realized that I joke a lot about it as a way to get my audience to see me as a real person.

EW: Otherwise, there's this elephant in the room.

AB: Exactly. People have told me, "If you rely too heavily on your disability, it's gonna make you seem inhuman." The way I see it, I don't care if my subject matter is predictable, as long as my punch lines aren't.

EW: How did your parents react when you wanted to do comedy?

EW: You did public speaking? So did I. I had a hard time in school because I'm dyslexic, so I was like, "How can I participate in a way that'll get me to college and get me out of my small town?" I wouldn't know what I was speaking about a lot. So, people would laugh. They would think I was trying to be funny, but I wasn't. It's very similar to my comedy style now. ... When you did public speaking at those types of places, were you funny?

AB: I was always a little smart-ass. So once I found comedy, I fit in. Here they actually want me to be a smart-ass. ... Do you find that your dyslexia influences your stand up?

EW: I've been thinking a lot about it because I've having trouble remembering to say things exactly the same way. So sometimes I'll be more scared to try something where the wording has to be exact.

I think it also helps. I went to a summer school for kids with learning disabilities, and I noticed a lot of times people with dyslexia will put abstract ideas together really quickly, which can help with comedy. ... Do you think you'd do comedy if you didn't have your disability?

AB: Probably not. It would be a whole different perspective. And being such a little shit-head, nobody would like me. Part of the reason that audiences open up to me is they're not intimidated by me.

EW: I totally get that. If I wasn't dyslexic, I would probably be a terror. My parents had a pretty fucked-up divorce. I have an arsenal of stuff that could help with comedy, but if I was a straight white guy ...

AB: If we were completely non-minority, would we even be funny?

AB: I think the only thing stopping me from being a sociopath is that I'm crippled. How can I torture animals when I can't even wipe my own ass?

AB: It's something I've kind of been battling with. Moving, for anyone, to a big city is difficult, but for me trying to move so far away isn't really practical, unfortunately.

EW: I just thought of this, too, a lot of comedy club greenrooms aren't accessible ...

AB: Even the ones that are accessible are so small that all I can do is pull right in and just sit there.

EW: How do you not get mad?

AB: I guess I could get mad about it if I wanted to. I've been booked on shows where I couldn't even get into the building. It's frustrating, but at the same time I realize there aren't a lot of disabled comedians.

EW: If someone pisses you off, do you ever intentionally roll over their toes?

AB: I love human speed bumps. I make them wherever. Only if they really deserved it, though.

I've got one. What was the most awkward show you've ever done?

EW: I did a show at a college. A magician and I were each supposed to do an hour each. I had been in New York all summer doing 15-minute sets. I plowed through material. They weren't feeling it. Then about 40 minutes in, I got a big laugh. So I was like, "OK I'm gonna bring up the next act."

If you were watching, you would say, "OK that comedian did the right thing." But, the magician had apparently forgotten his magic pants, and left the venue to get them. So I ended 20 minutes early and he was running half an hour late. They had an intermission, most of the kids left, and I had a magician tweeting at me, like "You didn't do all of your time," and I was like, "If you hadn't forgotten your magic pants, this wouldn't have been a problem."

What was your most awkward one?

AB: I actually had a guy have a heart attack while I was in the middle of my show.

EW: You killed him.

AB: I did. I was opening and I hear this commotion to the right of the stage. I thought someone was arguing with the server, so I didn't do anything. I'm going through my set, and the headliner comes up, takes the microphone, and says, "Is there a doctor in the house?"

I go back to the green room and the manager walks in and he's like, "Hey Ally, I heard you killed." Luckily, the guy ended up being OK.

EW: I don't think I've ever heard that happen before.

AB: I hope it never happens again. ... Has there ever been a joke you've written, that's incredibly good, but you could never do it on stage?

EW: Oh man. There's a couple things that I've thought were funny that ... one of them gets a laugh, but I shouldn't keep it, but I think it's funny. What about you?

AB: My favorite joke, I've ever written. Everybody tells me not to do it, but it's my favorite. It's one of those jokes that I tell it, and it doesn't get a laugh, I'm like "All right, well, that one was for me."

EW: Is it a staple in your set?

AB: No. Every now and then there will be an audience where, like maybe a handful, will absolutely love it. That's when I'll do it. If I know there's at least one person that doesn't give a shit and will laugh their ass off, I'll do it for them.

AB: The rest of the set you're trying to make that one person happy because you know they're one of you.

Editor: That's beautiful. I have one last question for you both: Does comedy inherently involve breaking the rules?

AB: Comedy doesn't necessarily require breaking rules, but rather barriers. Every audience member enters with a wall up. A comedian has to figure out how to convince them to let their guard down. Some methods are non-traditional and require broken rules. ... Others are as simple as showing your own vulnerabilities. Comedy should be a platform with minimal rules beyond simple respect. Audiences appreciate the entertainment, but comedians need the art.

EW: It’s interesting, comedy has a lot of rules. From writing to getting into clubs, working your way up, and approaching your goals. There are rules. But I think the inherent act of pursuing something that is not considered a career by everyone — going against the grain with your schedule, ambitions, everything — you are breaking the rules.