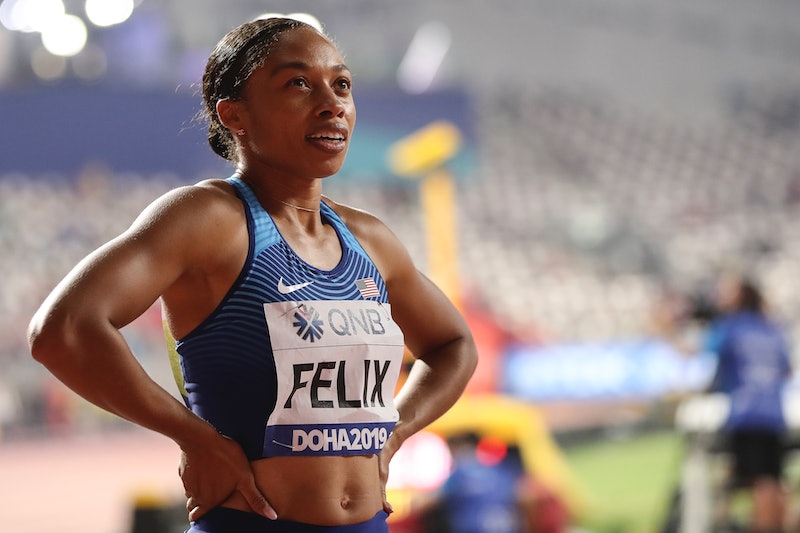 Allyson Felix isn’t only the most decorated track and field athlete in the world; she is also mom to a 10-month-old daughter, whose birth triggered Felix’s entrance into a debate around equal pay protections for new moms in sport. But while Felix’s pay negotiations may look different than yours or mine — she is currently Athleta’s first-ever sponsored brand athlete — she tells Bustle that negotiating for higher pay relies on principles that don’t change depending on the field you’re in.

“When I did my first deal, I was a teenager and didn't know what to expect or what to ask for — I was just grateful to be there,” the Olympian tells Bustle at personal finance company SoFi’s annual Get That Raise event in New York City. “Now, as a 33 year old, I’m much more involved in the process. I have an agent, but I want to make sure that I’m very present, that I understand my worth, what I deserve, and what I want to ask for.”

When your job is your passion, as is the case for so many Olympic athletes (and, uh, writers), it’s super common to feel grateful just to be in the room. But Felix says that you have to remember it’s a business, and the value you provide to an employer is something you deserve to be compensated for. “When you're the best in the world at something, there is a level of expectation of what you deserve,” she says. “Sometimes, [people] feel that … somebody else isn’t going to pay you any higher. That’s a red flag to me, because I do understand what my value is, and what that would be to other brands.” Her biggest advice to younger athletes is “not to feel like you should just accept something” for that very reason.

If you aren’t exactly sure what your value to an employer is in terms of cold, hard cash, talking to people across your industry about their pay grade can help. (Contrary to popular belief, it is not illegal to share salary information with your coworkers — but it is illegal for employers to discourage you from doing so.) SoFi’s free Get That Raise tool can also help you suss out if you’re underpaid compared to others with your job title in your geographic region and how much more you should ask for.

For athletes, the situation is a little more complicated. “Our salaries are not public knowledge,” Felix told a SoFi member during a public panel at the Get That Raise event, adding that athletes typically sign non-disclosure agreements around the compensation they receive in their sponsorship contracts. “We can't talk about what we make. And it's a real problem because a lot of times we don't even know what we're working with, what our counterparts are making. This is another area [where] I’d love to have some change in my industry.”

Still, Felix is quick to stress what you deserve and what you ask for doesn’t have to be just monetary compensation. “There are other ways to be supportive [as an employer] that aren’t contractual,” she says. One example she brings up is when she traveled for competition before she had her daughter, she'd have to share a room with another athlete. “It's like, ‘I have a 10 month old. I don't think [my roommate’s] going to appreciate waking up in the middle of the night’,” she says, laughing. This past season, she was able to travel with her daughter in their own room, which she says made a world of difference in terms of being able to be present as a mom — and in her performance. “When you're supported in those ways, you can do your job better,” she says.

That’s why knowing your worth — what you bring to the table, and what you want to walk away with — is crucial. No matter where you are in your career, or what industry you’re in, only you know what’s most important to you, be it money, vacation days, career development, or more. After figuring that out, asking for it is the easy part.