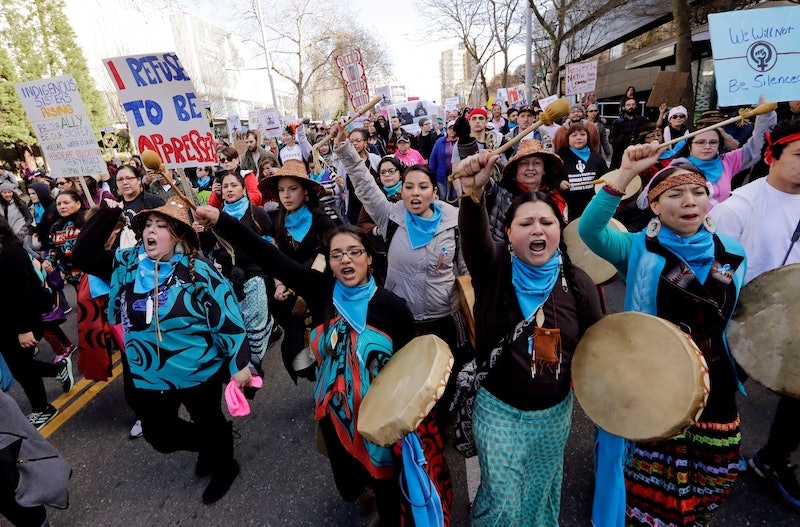 In 2010, a Seattle-based survey co-produced by the Centers for Disease Control and Prevention (CDC) and the Urban Indian Health Institute found that nearly every Native woman had been raped or coerced into sex at least once in their lives. You may be wondering why a survey that's eight years out of date is only just beginning to make headlines. The answer, it turns out, is nearly as shocking as the survey's results.

Abigail Echo-Hawk began her new job as director of the Urban Indian Health Institute in 2016 in the same way many other people begin new gigs — by poking around her new office, according to a Seattle Times exclusive. That's how she found a copy of the 2010 survey, which questioned 148 women who identified as American Indian and/or Alaska Native about their experience with sexual violence, buried among other files in the very bottom drawer of a filing cabinet tucked into the corner of her office. Despite the fact that the survey revealed important findings about both the rate of sexual violence against Native women and its impact, the Urban Indian Health Institute hid it for years.

Echo-Hawk told the Seattle Times that leaders at the institute had initially opted not to publish the survey's results because they feared they would promote negative characterizations of the Native community. But Echo-Hawk felt it was important to make the survey findings public and so, for two years, she worked with the CDC on interpreting and releasing the data in a report called Our Bodies, Our Stories: Sexual Violence Among Native Women In Seattle, WA.

"These women gifted us with these stories that were difficult and hard to tell," Echo-Hawk told the Seattle Times, "and they did it for a reason."

While it may be tempting to brush the results of this study off as simply extraordinary, data analyzed by the U.S. Department of Justice has shown that Native American and Alaska Native women are more than 2.5 more likely to be raped or sexually assaulted than other women in the United States. According to Amnesty International, the Justice Department has found that more than one in three American Indian or Alaska Native women will be raped in their lifetime compared to the rate of roughly less than one in five women when examining the country as a whole.

But, as Amnesty International noted, it's important to understand that researchers widely believe that available statistics on sexual violence against Native women likely underestimate the problem's true scope, because many instances go unreported. "Barriers to reporting include fear of breaches in confidentiality, fear of retaliation and a lack of confidence that reports will be taken seriously and result in perpetrators being brought to justice," Amnesty International said in its report, Maze of Injustice. "For Native American and Alaska Native women, historical relations with federal and state government agencies also affect the level of reporting of sexual violence."

While Echo-Hawk told the Seattle Times that the Urban Indian Health Institute would like to conduct a similar survey in additional cities, they're hoping the 2010 survey helps bring much-needed attention and awareness to the issue. "The serious lack of data and understanding about the violence perpetrated against urban American Indian and Alaska Native women is unacceptable and adds to the trauma Native people have experienced for generations," the Urban Indian Health Institute said in its report. "Bringing to light the stories of these women is an integral part of moving toward meaningful change that ends this epidemic of sexual violence."