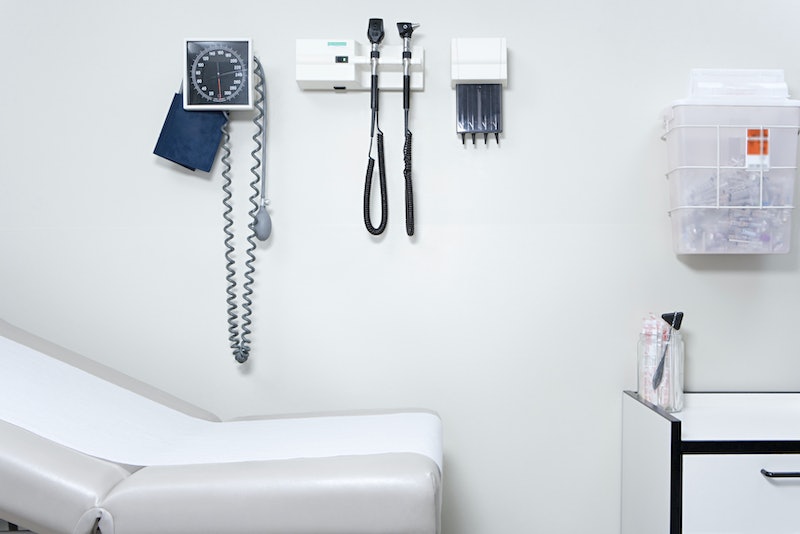 Most folks don’t particularly like going to the doctor’s office. After all, if you’re scheduling an appointment (other than your annual physical), there’s a high likelihood that you don’t feel well. Then, you have to wait in a stuffy waiting room with other people who don't feel well and fill out 18 forms that ask you the same question in different ways. The inconvenience of going to the doctor may be one of the reasons why folks are going to the doctor less frequently. But transgender youth in particular aren’t accessing health care at high rates, and it’s not because they don’t feel like filling out forms. According to a new study, about half of Canadian youth avoid the doctor because they're not comfortable talking about their health needs: many cite negative experiences with doctors in the past, or fear that their doctor will not know how to treat them.

The study, which was published in Family Practice, found that nearly half of Canadian trans youth aren’t going to the doctor when they need to. The numbers were even more startling for the younger (ages 14-18) study participants. Sixty-eight percent of those between 14 and 18 reported not seeking needed mental health care in the last year, and 34 percent didn’t seek needed professional medical care for physical ailments. For study participants who were between 19 and 25, 47 percent reported forgoing needed mental health care, physical health care, and regularly scheduled check ups.

"Many transgender youth have experienced uncomfortable and frustrating encounters with doctors, particularly when a doctor isn't well informed about transgender health," said lead author of the study Beth Clark, a PhD candidate in interdisciplinary studies, in a press release. "An encouraging finding was that young people who were more comfortable discussing trans health-care needs with their family doctors reported higher levels of mental health and health overall."

Of the 923 teens and young adults the researchers questioned, many described previous negative health experiences or being afraid of what the doctor would say or do as reasons for not seeking medical care. Lack of access to transportation and hoping the problem would go away on its own were other reasons why they reported not going to the doctor.

A similar study published in the American Medical Association's Journal of Ethics in 2016 found that American trans youth avoid sharing information with doctors about their identity and medical history due to past negative experiences in a health care setting. More in-depth studies regarding trans youth in America are in their early stages. A longitudinal study that focuses on American transgender youth is currently recruiting participants. Researchers at the University of Washington will examine early gender development, mental health, and well-being, and the impact of early life experiences on later life outcomes in our participants on trans youth between ages 3 and 12.

The doctor’s attitude and knowledge of trans-specific issues is often on the forefront of trans folks’ mind when they’re choosing a doctor. Serenity Dee, a trans woman, tells Bustle, “I was referred to my current PCP (primary care physician) specifically for medical transition and she wound up becoming my PCP because I saw her far more regularly than I did my previous nominal PCP. But I hear horror stories from friends and through the trans community in general that I'm not looking forward to having to find a new provider should she retire or should she or I move.”

Dee’s positive experience with her doctor mirrors the findings from the study. Participants reported better general health outcomes when their doctor knew their gender than those whose doctor didn’t know. The study also found that when trans youth had confidence in their health care provider, their physical and mental health improved.

"Trans youth have higher risk for negative health outcomes due to stigma and discrimination, so knowing that they don't access health care even when they need to is concerning. The responsibility lies with us — with health professionals, health educators, and policymakers — to improve our competency in transgender health and ensure our trans patients can have confidence in the health care they receive," said Elizabeth Saewyc, a nursing professor who leads the Stigma and Resilience Among Vulnerable Youth Centre at the University of British Columbia, in a press release.

The relationship someone has with their doctor is intimate, and like all other intimate, this relationship cannot thrive without trust. The burden is not on trans folks’ to change their attitudes towards doctors; doctors must seek additional training that allows them to effectively treat trans people.