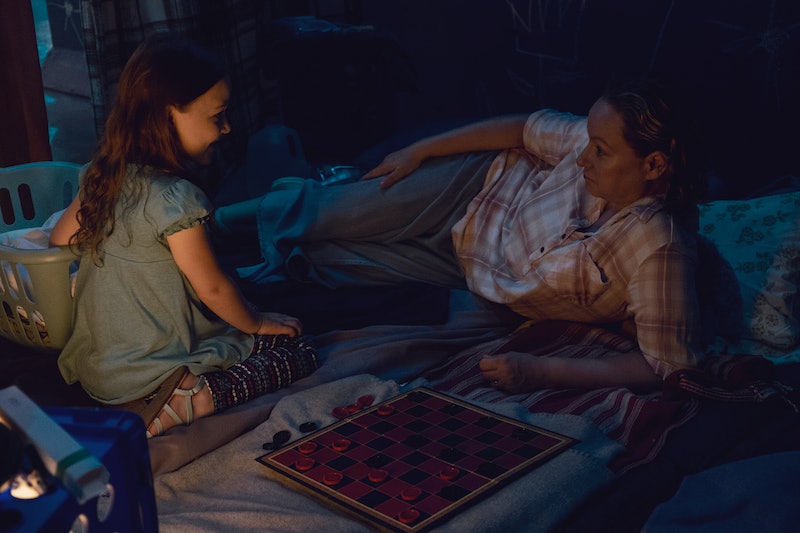 The Walking Dead introduced two major characters from the comics, and new information about this season's Big Bad adds a new layer of complication to the looming threat. In Sunday's episode, the Hilltop's prisoner finally told the truth about who Alpha really is. The Walking Dead showed Alpha's backstory through Lydia's eyes, and it makes the Whisperers even scarier. As if that was even possible.

Alpha's backstory is not really in The Walking Dead comics. She's as mysterious as her name would entail. All we really know that is that she and Lydia have a bad relationship, and that the Whisperers may have originated near Washington D.C. — but since they never stay in one place too long, it's never clear.

Episode 10, "Omega," gives us a few versions of how Lydia's mom came to be Alpha, through flashbacks tampered by her mother's abuse and brainwashing. Lydia starts telling Henry and Daryl a lie that she's learned, or told herself, from childhood — but then ultimately reveals the truth about how her mother abused her, killed her father, and betrayed the survivors their family was living with when the world collapsed because she found them "soft," or weak.

If you get confused while watching, pay attention to the tattoos: it's Frank, Lydia's father, who has Lydia's name on his arm. Any scene where he doesn't, and Lydia's mother does, is a lie. She even slips and messes up pronouns, once or twice, while sharing her story.

Lydia tells Henry that her mom sounds a lot like Carol — a fair comparison to the casual observer, but far from the truth. Lydia is one of many Walking Dead characters who has survived an abusive family and the apocalypse, much like Carol. Henry, who has overheard Carol talking about her abusive first husband Ed, recognizes the signs of abuse in the prisoner. Of course Daryl, whose father and brother physically abused him, already has, too.

"Some dads come up with any excuse just to beat the sh*t out of their kids," Daryl says to Lydia, identifying the inconsistencies and holes in her story. "Your dad sounds a lot like one of those dads — except the part where he sang to you when you were scared. Those dads? They like it when you're scared. Thing is, that's the only part of your story that didn't sound like bullsh*t."

Although he's trying to figure out if he can trust her, you can already see that Daryl has a soft spot for Lydia.

Lydia doesn't believe that her mother or the other Whisperers will come find her at the Hilltop. They move on when someone is lost, she says, as if they never existed in the first place. However, at the end of the episode Alpha does appear at the gate of Hilltop, unmasked. Flanked by her gang of Whisperers, she asks that they give her back her daughter. So, Alpha isn't completely dispassionate towards Lydia. That doesn't make her a good mother, at all, but it does further complicate all of these relationships going forward.

Will the Hilltop give Lydia back to her mother? If the Whisperers have hostages to trade, Tara may hand her over — but it doesn't seem like Daryl and Henry would want her to go back to that life.

Alpha may not be sickly charming like Negan, or a sympathetic villain in any way, but we care about Lydia now. Their backstory gives the characters, and the audience, emotional stakes in the Whisperer War to come on The Walking Dead that aren't quite like anything we've seen before.