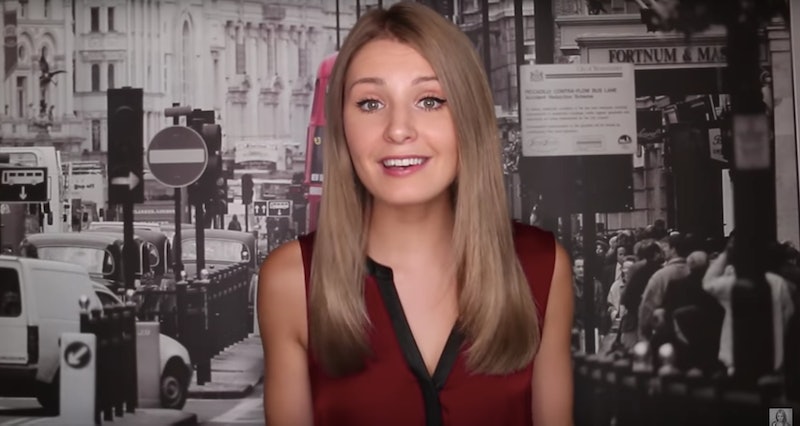 According to a report published by Salon on Monday, some well-known alt-right women seek equality with their male peers — and, well, that is the essential gist of feminism, folks. In separate social media posts shared by figures like Tara McCarthy and Lauren Southern, it seems as if the ultra-conservative movement is beginning to witness internal strife on the front of gender equality.

McCarthy, who locked her account on Twitter after her weekend criticism, is a self-described "ethno-nationalist" and a popular alt-right activist. On Sunday, McCarthy tweeted that female members of the alt-right were victims of incessant trolling and that male peers of the movement should, per McCarthy, step up and stand for the acceptance of "in-group" women. Although McCarthy's account is no longer open to the public, her tweets were linked in Salon's report.

Taking issue with supposed "bullying" online, McCarthy wrote that the intention of "trolls" was to push alt-right women into silence by forcing them out of their virtual platforms. "Women in the alt-right are constantly harassed by low status anonymous trolls trying to put us in our place. Women of all ages, who do or don't have children, are harassed for various 'reasons'. The ultimate goal seems to be to bully us off the internet," McCarthy tweeted.

The far-right activist went on to say, "Men in the alt-right are going to have to decide whether they will continue to passively/actively endorse this behavior, or speak out against it. If you want more women speaking publicly about ethno-nationalism, I suggest you choose the latter." Ultimately, McCarthy claimed "people who proclaim to be on our side are trying to tear down women in our in-group."

If you're not familiar with the extent to which the alt-right expresses extreme hostility towards feminism, consider one of its members, Andrew Anglin, and his stance on white women having children with men of color. In a report on alt-right women, Harper's Magazine shared Anglin's quote wherein he said, "It's OUR WOMB. It belongs to the males in her society." There's also alt-right figure Milo Yiannopoulos who once asked, "Would you rather your child had feminism or cancer?"

With such extreme views emanating from some of the most prominent members of the movement, it's no surprise that some alt-right women are demanding more autonomy and independence for themselves.

McCarthy isn't alone in her complaint against the movement's perceived hostility to women. Southern published a YouTube video in late November to explain why she was not quite ready to enter the institution of marriage. In the video, Southern can be seen criticizing people for reportedly taking issue with her stance not to get married at 22. Southern said she had received comments like "Hey, Lauren! Why aren't you making videos with your five kids and your husband?"

Southern told her YouTube audience, "I am not trying to sell the idea that myself, as a 22-year-old, needs to be married right now for the sake of traditionalism and not being a degenerate." She then said that she had no plans to appease online observers by getting married anytime soon. "Some women, yes, are going to be happier not having any kids. They are going to be happier not being married. And that's OK. That doesn't make them a horrible human being. That doesn't mean they have to be shamed for the rest of their lives," Southern said.

In spite of her insistence that she enjoys "taking the piss out of hardcore feminists" and the "silly things they do," Southern's rallying cry against alt-right men's judgement is unmistakably a simple feminist demand: Let women decide their own fate.