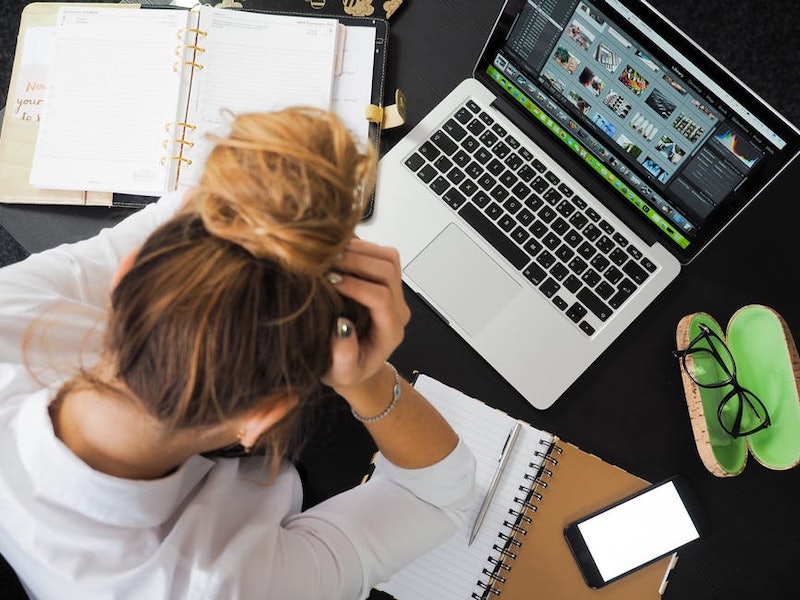 If finding the right job were easy, none of us would have had to take that career test in high school that said our job options were, like, a nurse or a clown and that’s it. (You guys had to take that test, too, right? And those are the answers you got, too, right? ... Guys?) Understanding how to find the best career for you is unfortunately not always as easy as filling out a scantron or simply reading through a listicle. (Self-aware listicle is self-aware.) That’s not to say you’re doomed to be in the wrong career your entire life. In fact, figuring out if a job is the right fit for you often entails identifying warning signs that your work just isn’t... well, working.

A Gallup poll from 2013 found that only 13 percent of employees are engaged at work. That’s less than two out of every 10 employees at any given company. The survey also found that almost a quarter of employees (24 percent) were “actively disengaged” at work. Not only did those employees lack motivation, they also were unhappy or unproductive in a way that could potentially affect other employees. Basically, negativity breeds negativity, especially in the workplace.

Now, contemplating leaving your job isn’t necessarily the same thing as wondering if you should change careers entirely. Identifying the signs you should quit your job may be a little easier than acknowledging your current career field as a whole isn’t right for you. The two certainly have some clear overlap (for example, you can’t stop watching the clock when working, you feel like you only complain about work, etc.). However, some of those things could be remedied by switching to a different company or work environment.

Say you’ve switched jobs and the feeling remains, or you suspect your dissatisfaction extends beyond feeling so-so about your boss. Then what? Bustle spoke to some career experts via email and got advice on knowing when it might be time to start looking at other job options. Each revealed their top sign that you’re not in the right career.

So, if you’re wondering whether the work you’re doing is right for you, here are seven signs it’s not.

Jennifer Yeko, who works in PR and hiring at True Talent PR, says feeling stagnant is a tell-tale sign of being in the wrong field. For example, “you've been in the same job for over three to five years and aren't learning anything new or growing with the company,” she says. While that may be a sign you’re ready for a job move, it could also be a signal to reevaluate your work and ask yourself, “What could I be doing that wouldn’t make me feel idle?”

“The one sign you are not in the right career is when you start to operate on autopilot and have mentally checked out of what you are doing,” Alina Tubman, a career consultant, says. Getting into a rut is normal, and mundane routines are to be expected in most careers, but Tubman says it’s time to reevaluate if refueling isn’t working. “We can oftentimes get reenergized after a weekend or a vacation,” she says, “but if you still feel yourself not caring too much about your work, it's probably time to consider other options!”

“While your career path is yours to own, you need the support of others for guidance, opportunities, personal growth and to achieve your potential,” says Nicole Wood, career coach and CEO and co-founder of Ama La Vida. “You may be able to actively seek out this support, but if you’re still feeling that senior leadership isn't investing in your initiatives or advancement, you may want to look elsewhere.” Feeling isolated could be a clue that your career isn’t right for you.

However, this lack of support could also simply be a sign that the specific job you’re in or place you’re working right now might not be a good fit, rather than a signal that you need a new career entirely. If you’re not sure where you fall in that spectrum, Moritz Kothe, CEO of kununu, has some advice. “For many just a change of environment within the field they are passionate about is enough,” he says. “However, some may realize during this time that there is a career better suited to their priorities.” Kothe recommends that you “take the opportunity to evaluate these factors during the interview process and understand what you want out of your work life.”

Going to graduate school is a big investment financially and time-wise. Obviously, choosing to go to grad school can do great things for your career and further solidify that you’ve chosen the right career path. But, Jeff Hittner, career change expert and founder of Your Project X, says that seeing grad school as an out rather than an opportunity can be a big sign that you’re not in the right career. Hittner says that if you’ve reached the point where “debt is a better option than the certainty that you’re far removed from your life’s work,” perhaps it’s a good idea to make sure you’re on the right career path. That could certainly take you down the path of high education, but best to do it as a means to advance your career instead of avoiding it.

Wood also mentioned dreading the alarm clock every day. “Many of our clients come to us with a severe case of 'Mondayitis.' They get anxiety on Sunday nights (and most weekday nights) thinking about work in the morning,” she says. “If you work a 40-hour work week and sleep eight hours per night, you spend more than [one-third] of your waking hours at work… That is a significant portion of your life to dread. If you find yourself feeling this anxious about your job, it is definitely time to consider a new path.”

“A buildup of work-related stress over time can often lead to you lashing out on those around you," Wood says. "You may find yourself acting in ways that are completely out of character, shocking and embarrassing.” Again, this could be an indicator that your current job isn’t a good fit. However, it’s also important to ask yourself whether the worries and stress affecting your life seem job-specific or industry-specific.

According to Rachel Bitte, chief people officer at Jobvite, this is usually “a dead giveaway it’s time to move on.”

“Even if the opportunity is lucrative, it’s hard to escape that sinking feeling when your day-to-day work doesn’t line up with your overall priorities (or even makes you feel bad about yourself)," Bitte says. "If your job makes you feel morally bankrupt, doesn’t allow you to lead the life you want, or doesn’t feel like a permanent thing, you may want to consider devising a game plan to discover that next move.”

You know yourself best. If you’re spending more time thinking about other career opportunities than how to continue within the field you’re working, perhaps that’s a sign that you’re seeking a different sort of fulfillment from your current job.

“Taking that leap of faith can be scary,” Bitte says, “but workers change their career paths all the time. It’s all about mapping the experiences and skills you’ve gained to the new career that you want. After all, you can’t put a price on your long-term happiness.”