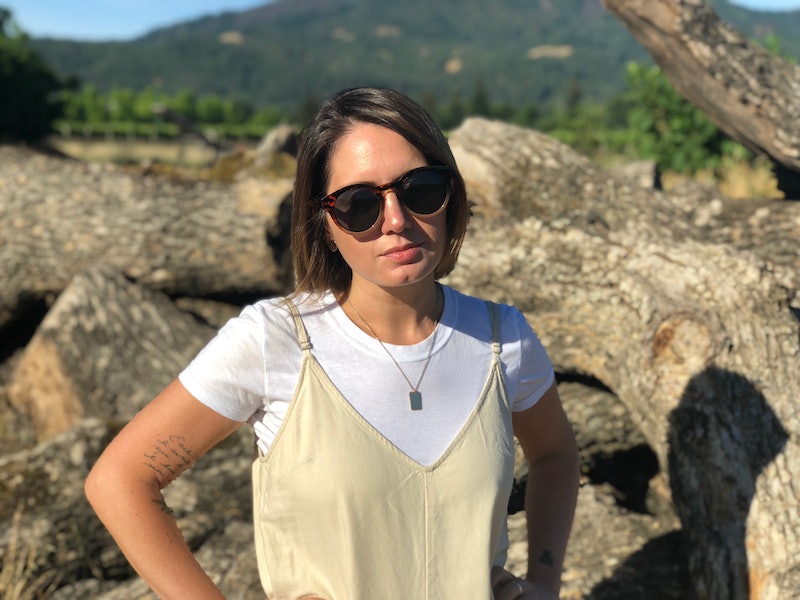 Earlier this year, my husband and I were sitting next to each other on an airplane, traveling home from a never-long-enough vacation, when out of the corner of my eye I caught a glimpse of what he was looking at on his phone. I figured he was doing a crossword puzzle, watching one of his favorite obscure British history videos on YouTube, or checking the baseball scores — any one of the many hobbies he deploys to keep himself busy on airplanes. But instead, he had Googled something — a single word — and he was enraptured with the results.

The word he had Googled was “quilting.” I was horrified.

“Are you going to start quilting now?” I blurted out, causing several passengers to turn their heads in confusion.

“Maybe,” He responded casually. “Maybe quilting will be my next thing.” Immediately, a million questions raced through my mind.

Are we going to need to buy a sewing machine?

How much will it cost?

Where will we put it?

Have you researched the long history of quilting from a feminist perspective?

Why do you feel like this is a good use of your time right now?

Can you make money doing this?

“Relax,” he said, sensing the mental list I was making of all the ways his casual quilting hobby was going to destroy our lives. “I’m just thinking about it. Could be fun.”

Here’s my problem with hobbies and interests that are just “fun” — what the fuck even are they? I don’t watch sports. I don’t collect anything. I don’t read comic books or dabble in witchcraft, makeup tutorials, pottery, or even group exercise. If I am being honest, I spend most of my time out of the office doing what other people would classify as chores. If I have a free Sunday afternoon, I might cook, or clean, or — if I want to get out of the house — I might go to the furniture store I like in my neighborhood and look at stuff I can’t afford. I rarely get lost in an activity, as I always keep myself on a schedule. Binge watching Netflix? No. I get a strict hour and a half, and during that time, I also need to be doing my nails or replying to work emails (and unless it’s raining, I rarely watch TV during the daytime anyway, as I feel immense guilt about not being active during working hours). When someone asks me, “so what do you do for fun?” my mind turns into a giant blank canvas of nothing.

My interest in something wasn’t actually ever about the activity itself, but the praise and attention I would get for being the best at it.

Geoffrey is the total opposite. For the first two seasons of Game Of Thrones, he ran a popular trivia night at a local bar (and didn’t even get paid for it!). The trivia night was based on the books, A Song Of Ice And Fire, so it wasn’t for casual watchers of the show, but instead for the super nerds who are truly invested. Geoffrey is also really into conspiracy theories, loves to read about folklore, and can spend hours watching Instagram videos of men getting very precise haircuts at barber shops. He’s the easiest person to buy gifts for — everyone knows he loves dinosaurs, the Red Sox, and New Haven style pizza. When I asked him what he wanted to do this weekend, he said he had planned on whittling these two walking sticks we randomly keep in the same tin can as our umbrellas. We don’t regularly hike or go on outdoor adventure excursions, and there’s really no reason to own — never mind bust out — the walking sticks, but that’s neither here nor there.

Some days, he’ll just sit at the kitchen table and draw, and to be honest, he’s not even good at it. It drives me totally nuts. But quilting? This has gone too far.

At this point you’re probably wondering what’s wrong with me, and that’s fair. I often wonder that as well. But I’ve been this way for a very long time. As a kid, I had tons of flash-in-the-pan interests. One day I would be into art, the next day into pet psychology, but my interests always ended in the same goal: being interviewed by David Letterman as the premiere expert or talent on that one thing (we watched a lot of David Letterman growing up). Even as I blended pastels on a canvas in my bedroom, or wrote one-woman shows to perform just for my family, I was rehearsing my interviews. How I would walk out, charm Dave with something witty, and impress the audience with all my know-how. My interest in something wasn’t actually ever about the activity itself, but the praise and attention I would get for being the best at it. You know, for being the most talented 12-year-old pet psychologist in the world. I only wanted to do things if they were productive — and by productive, I mean if they led to receiving praise (and hopefully a paycheck).

In the first 30 years of my life, I started and stopped more hobbies than I can list.

The issue with pursuing hobbies only in the interest of fame is that it’s easy to get discouraged. It’s the old time-versus-money conundrum — which do you place more value on? When you just focus on the prideful, ego-driven aspects of being “talented” (i.e., the money), you never actually learn how to play the ukulele or french braid hair, and so you never truly learn how to enjoy anything. You waste your time, usually some money, and then you just give up. In the first 30 years of my life, I started and stopped more hobbies than I can list. Everything from acting to yoga, clarinet to gardening. I probably spent tens of thousands of dollars on all the art supplies, books, clothes, and accoutrement that went along with each of these activities, flushing my money down the drain as I hopped from one false-start or surface-level attempt to the next. During this time, the only thing I became an expert at was stuffing Rosetta Stone DVDs into the very back of a desk drawer, signing up for cooking classes I never attended, and being secretly very jealous of people who were dedicated hobbyists with patiently honed skills.

From the back row of the chorus, I’d watch my best friend sing opera as the lead in a high school play, convinced some day that’d be me. But I never just sang for the hell of it. How sad is that?

And then, I just sort of stopped trying. I gave up the fantasy that I would someday be the best at anything, and along with it, the curiosity in trying anything new. Fantasy shows are not for me. Hip-hop dance class is not for me. Spending money on a new craft or kitchen tool or piano lessons? Not for me. I’m 34. The ship has probably sailed on becoming the world’s youngest or most talented anything.

It’s absolutely the fear of failing, of being the worst at something, that prevents me from pursuing new hobbies and interests in the first place. I don’t like being the new kid, of starting at zero and slowing down the rest of the group. When Geoffrey expressed a Google search’s worth of interest in quilting, my brain populated all the reasons he shouldn’t even consider it. And while some of those concerns are valid (he should consider selling his wares), they’re also just lame excuses — the things I say to myself so I never even try. The worst of these excuses is my obsession with being productive. That word means everything and nothing at all, yet it holds so much weight for me. I may have given up on being interviewed by David Letterman (he only interviews a few people a year now), but I haven’t yet been able to give up the idea that nothing is worth doing unless I know at the outset that I'm going to be so intensely, shockingly good at it that a statue is erected in my honor. Unless it’s going to be my “thing.”

But Geoffrey has never had this hang up. And neither has my best friend from high school, who isn’t just a singer — she’s also a librarian, a baker, a gardener, and an artist. Casual crafters, Dungeons and Dragons enthusiasts, birders, and people who brew their own beer at home — they’ve all captured something elusive to me — the ability to do something just because you want to. Sometimes learning a song on the guitar is just learning a song on a guitar. It doesn’t necessarily mean you’re going to be the next Ed Sheeran (which is a good thing — we really only need the one). Hobbies are simple. They’re the good stuff. Studies have shown that having a hobby can actually make your life longer. I think that’s really beautiful, and I’m grateful to have people in my life who have them.

But... I’d still need a practical reason to start quilting. Like we’re stranded in Saskatchewan with a pile of old rags and we need to make a blanket or else we might die of hypothermia. Fortunately, that’s not the case for Geoffrey, so I hope he does explore this craft. Who knows? Maybe he’ll get internet famous for making the world’s most hideous bedspread… or maybe he’ll just enjoy doing it, and that will be enough.