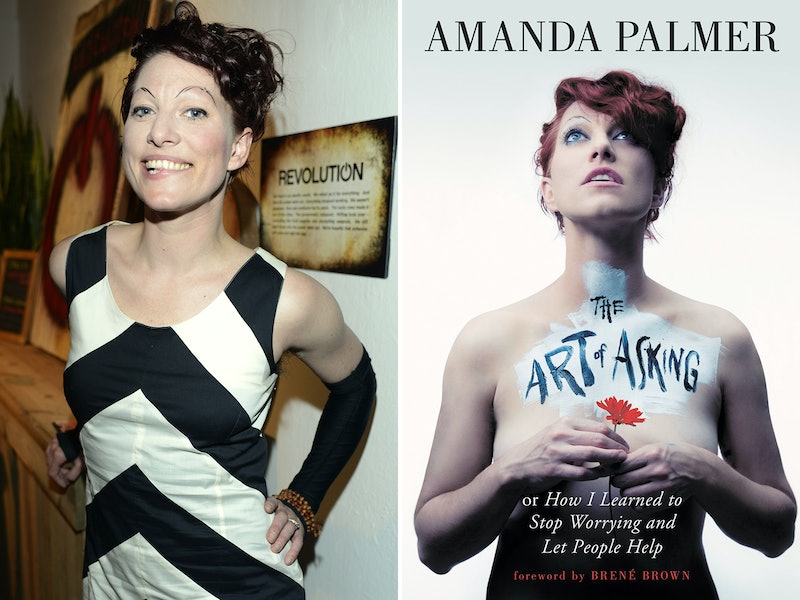 I love a good book about creativity. Anyone who has ever made, or attempted to make, anything has probably found themselves scouring the self-help section at one time or another, desperately searching for the secret that is going to help us become prolific, successful creators with the least amount of heartache possible. If you count yourself among those creativity book readers, you probably feel like you've heard it all before. And to a certain extent, I'm with you. I have a couple of favorites that I return to for a creative jolt, but the rest of the time I feel like I am wading through the repetition to get to something truly new. Maybe that's why I hesitated to read Amanda Palmer's The Art of Asking for so long.

When I did pick up the book, I was surprised to find that Palmer's advice, though perhaps one of the simplest creative tips I've ever come across, is also one of the most powerful. And it's right there in the title, condensed to the following: ask for help. I know, it's mind blowing. But stay with me.

How many times have you, while in the process of writing, or painting, or composing, or whatever it is you do, stopped to ask someone for help? It's probably a pretty rare occurrence. And Palmer has a theory for why that is.

“From what I've seen, it isn't so much the act of asking that paralyzes us—it's what lies beneath: the fear of being vulnerable, the fear of rejection, the fear of looking needy or weak," she writes. "The fear of being seen as a burdensome member of the community instead of a productive one. It points, fundamentally, to our separation from one another.”

The Art of Asking by Amanda Palmer, $8, Amazon

For so many creative people, the idea of making something is so personal — and often times so solitary — that the idea of including others in the process is almost unthinkable. Sure, there are bands who make music together, each instrument as important as the other. Yes, there are writers who draft novels together. We all know that art can be collaborative. But when you're sitting down at your desk, and you're penning that first draft, I'm willing to bet that a vast majority of us think more along the lines of "I will never let anyone read this" rather than "I have to ask someone to read this."

I can't count the amount of times I've had an idea, and kept it entirely to myself, working on it in secret. Is it fear of failure or fear of rejection, as Palmer writes, that has forced me into solitary creative confinement? Most definitely. But there is also something equally sinister that I think many creatives are terrified of: being seen as a fraud.

But there is also something entirely more sinister that I think many creatives are terrified of: being seen as a fraud.

“The Fraud Police are the imaginary, terrifying force of 'real' grown-ups who you believe—at some subconscious level—are going to come knocking on your door in the middle of the night, saying: We've been watching you, and we have evidence that you have NO IDEA WHAT YOU'RE DOING," Palmer writes. "You stand accused of the crime of completely winging it, you are guilty of making shit up as you go along, you do not actually deserve your job, we are taking everything away and we are TELLING EVERYBODY.”

Wow, right? Palmer has completely captured this thing that so many of us probably don't even realize we're thinking. We don't ask others for help because we're constantly afraid that, in doing so, we are donning a metaphorical night-vision jacket with the word FRAUD stuck on the back in flashing neon lights. How can we call ourselves writers, artists, musicians, entrepreneurs, whatever, when we can't even make what we want to make on our own? It's almost as if we think that if we can't get our art from idea to creation entirely by ourselves, we don't deserve to make anything at all.

We don't ask others for help because we're constantly afraid that, in doing so, we are donning a metaphorical night-vision jacket with the word FRAUD stuck on the back in flashing neon lights.

But creative collaboration, Palmer proves throughout her book, is really the best way to have a fulfilling artistic life. Palmer talks about the many "patrons" she's had throughout her life, from the ice cream shop boss who let her keep her costumes in his basement, to the thousands of fans whose Kickstarter donations helped her create a new album. Yes, Palmer had the ideas and the skills, but without the help of others they would have never made it out of her head and into something tangible. And what good is that doing for the world?

So in 2018 I am resolving to ask for help, whatever that means. To tell people my ideas, to share my drafts, to ask for advice. In a time when making things can be harder than ever, but the things we make are actually even more important, creating a community of support around us is really the only way to make it through. And by admitting our fears to others, we can all come to Palmer's powerful conclusion:

The Art of Asking by Amanda Palmer, $8, Amazon