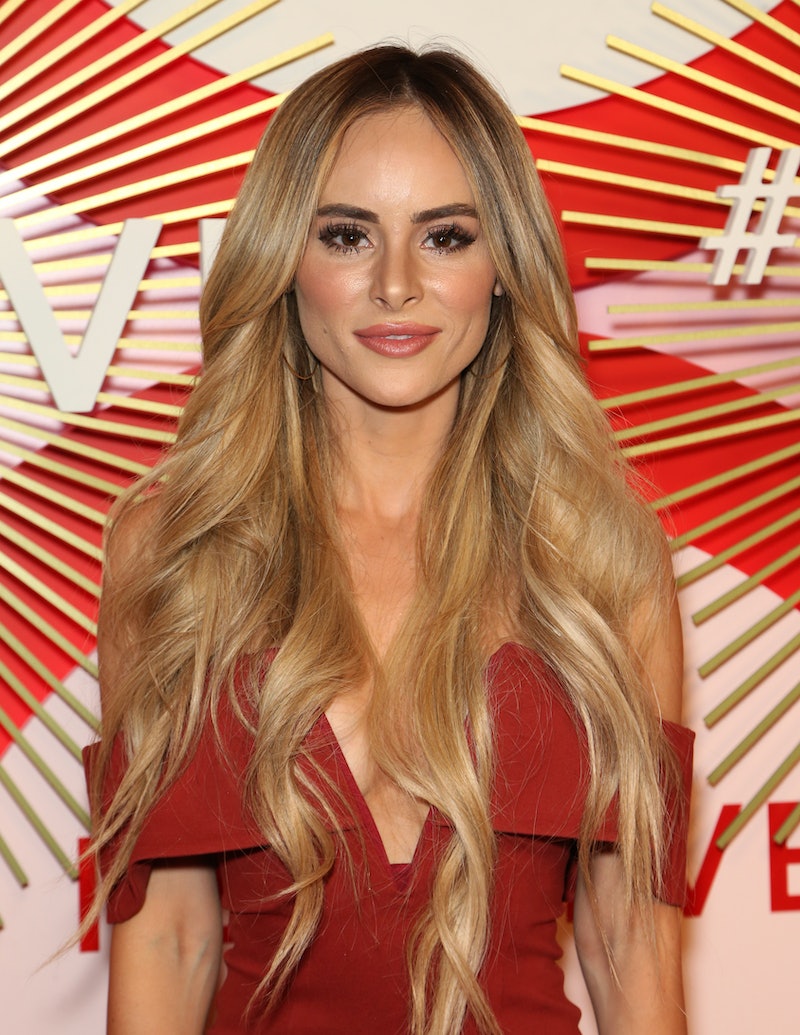 Bachelor in Paradise standout Amanda Stanton has revealed a lot about her life — both on TV and social media. However, she shared the aspects of her life that she wanted to. Now, she's in an unfortunate situation that's completely "out of her control," as she phrased it. According to Page Six, someone allegedly stole nude photos of Amanda and sent them out to people she knows. The pictures were pre-operation photos from her doctor's office. (Bustle reached out to Amanda's rep for further comment, but did not receive an immediate response.)

"Amanda Stanton is the victim of an online hacker. The hacker acquired photos from Stanton's doctor following her past breast augmentation; hacking the doctor's database and threatening to release all of the images to Stanton's followers unless Stanton agreed to pay an exorbitant amount of money. To combat the attack, Stanton began unfollowing some of her Instagram followers in an attempt to keep the images from being released. Unfortunately, the hacker has since sent the images to a number of Stanton's followers including past boyfriends, ABC producers, and more. Authorities are involved as this is an ongoing investigation. With the support of her family and loved ones, Stanton wishes to deal with this matter privately moving forward due to the vicious nature of the individual responsible for her harassment."

EARLIER: The mother of two explained the situation in a series of videos that she posted to her Instagram Story on April 2. She told her followers through tears,

"I just wanted to come on here and tell you guys a little bit about what's going on ... About three weeks ago, when we first moved into our new place, I woke up randomly in the middle of the night and looked at my email. I had about four emails from a random person who I didn't know, who had said he hacked my doctor's database from when I had my breast augmentation and that he had some nude photos of me in the doctor's office."

Aside from stealing private medical photos, Amanda claimed, "He was basically asking for a lot of money and threatening to send the photos to everybody that I follow."

She continued explaining, "He said even if I unfollowed everybody that he already had them documented. So, he already knew who I followed and started sending my photos to people." Those people include her friend's boyfriend, people she works with, and more. Amanda also said that the hacker had been harassing her every single day, leaving her feeling "frustrated" and "very violated."

After sharing the story, Amanda explained why she decided to go public with the whole situation. She said, "It was just kind of out control and there was nothing I could do about it. So, I figured that I might as well just address it."

This saved her the time of responding to every individual person who received these photos, since apparently he messaged "a lot of people." Then, Amanda said, "I just want to say thank you and that I'm sorry I haven't responded to everybody. It's just been hard explaining the story so many times."

She concluded her first round of Instagram Story videos with some optimism: "I just don't want to give somebody like that power over me. And I hope that maybe just by addressing it that he'll stop."

A couple hours later, she returned to Instagram Story with an update. She said, "Good news, the hacker has left me alone since I posted that." Then she admitted, "I know it hasn't been very long. He's probably going to message me again tonight."

She also addressed a specific comment that she said she received from many of her followers. Amanda said, "For all of you guys telling me to contact the police, I have already done that." In her last video of the night, Amanda concluded, "It's out of my control and I feel a hundred times better now that I've addressed it."

Now that Amanda has shared her story, let's hope that's enough to get the person to stop contacting her and the people in her life. And more importantly, let's hope that the police track this person down for such a violation of privacy.

More like this
Jill & Jacob Split Up Right After He Hard-Launched Their Relationship On IG
By Grace Wehniainen
Victoria Fuller & Greg Grippo Addressed Their Relationship Timeline
By Grace Wehniainen
Larsa Pippen Is Reportedly Dating The Son Of A Legendary NBA Player
By Jake Viswanath
Is Queen Elizabeth II Or The Royal Family In Netflix’s 'Harry & Meghan' Docuseries?
By Jake Viswanath
Get Even More From Bustle — Sign Up For The Newsletter