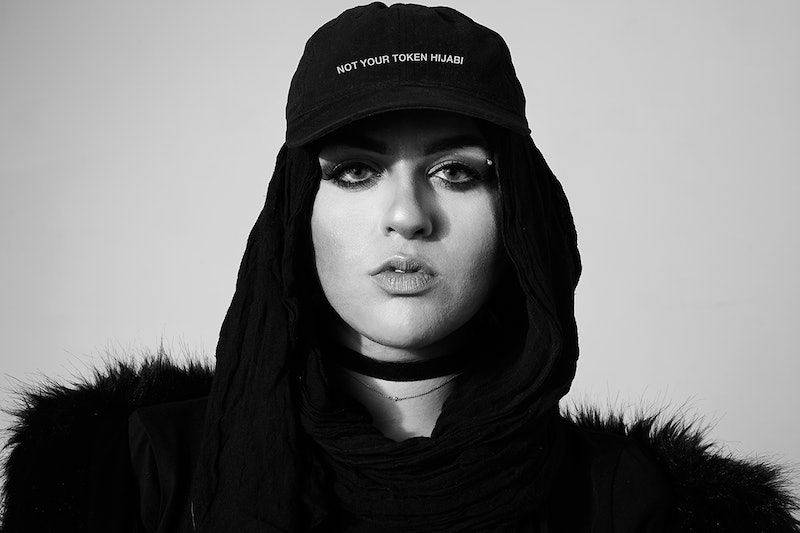 Amani Al-Khatahtbeh didn't grow up in a community of young Muslim women — that's why she made her own. Proud of her culture and frustrated with the perception of Islam in a post-9/11 word, Al-Khatahtbeh decided to create a space where Muslims and non-Muslims alike could learn more about the culture, religion, and the people who practice it. She founded MuslimGirl in 2009 as a senior in high school. Today, she is a published author and the first veiled Muslim woman to be named to the Forbes 30 under 30 in media.

For Bustle's 2018 Rule Breakers issue, Al-Khatahtbeh spoke with good friend Lauren Jauregui, solo artist and former member of Fifth Harmony, to discuss the beginnings of MuslimGirl, the importance of representation, and fearlessness.

Lauren Jauregui: First of all, congratulations. What does a being a rule breaker mean to you, in your own words?

Amani Al-Khatahtbeh: Being a rule breaker means standing for what you believe in, even if you're the only voice. It gets really scary to be a voice that defies the status quo, but you won't believe how many people are yearning to do just that. Being a rule breaker is really just defying the pressure to stay silent, defying the pressure to move away from who you are to appease other people. And yeah, just to stay authentic.

LJ: I agree. What first drew you to activism and being that voice?

AA: I was pressured to not be that voice from a really early age. 9/11 happened and I was a little girl. So it was kind of like, overnight, society was giving me all these mixed messages about who I was and what I believe in. It was this enormous pressure to move away from my identity and to be ashamed of where I came from.

And it wasn't until I became reacquainted with my culture, with my family, that I had this reclamation of my identity. I went to the Middle East for the first time and that was just so eye-opening, just the huge contrast between how things really were in the Middle East versus how they're being portrayed here.

That just opened my eyes. I have so many privileges, and it was really important to try to use those privileges and those resources to shine a light on the truth. Growing up, I was that one voice. I was one of very few Arab-Muslim kids in my high school. I always got bullied. I really didn't fit in with my peers. I always felt like I had to be the one to say something. Experiencing post 9/11 as a Muslim American really awakened that moral obligation.

LJ: Have you ever felt like your identity as a Muslim woman has prevented colleagues in the industry from taking you seriously?

AA: I think it's mostly in the tech space that I have felt so much sexism and condescension. Things like fundraising for a startup, even just pitching the startup, you're already dealing with the short end of the stick. People look at you and already have all these preconceived notions about you. First that you're a woman and they dismiss you because of your gender. Then, because you're a young woman, you get told in some way, "Little girl, you don't know what you're talking about." Then, on top of that, add being a woman of color and it's a lot of red tape.

I've experienced it firsthand. Young women and women of color already lack a lot of resources and opportunities to make it in those spaces. It's frustrating, but that's the whole point. We want to wade into these spaces and it's always going to be hardest when you're on the front lines. To me, it's another step in this greater process, the bigger picture.

Being a minority startup has definitely been taxing. It's very difficult to not have the resources you need to do the change that you want.

LJ: I commend that because I definitely understand that it's a fight. I feel like a lot of times, life, in general, is a fight. If men and women just understood that they're equal, it could heal all of the trickle-down effect that comes with our separations in gender. I think it's really cool that you're creating those spaces and that visibility in the community.

You were speaking of the challenges you face. Has there been any that have made you question your goal?

AA: Being a minority startup has definitely been taxing. It's very difficult to not have the resources you need to do the change that you want. A lot of times, it's women of color that are the ones that have to bear that pressure for the sake of the mission.

But, I don't think there's ever been one single challenge that we faced that's ever made me question our mission or why we're doing this. My team and the women I work with daily are the reason I would never even question it because it means so much to so many people and we've needed a space like this for so long. ... It's like any challenge that comes our way, we've dealt with bigger.

AA: It gets hard for sure, and there are moments that are really frustrating, but that conviction never wavers.

LJ: So why do you think diversity and representation are so important for American culture?

AA: Growing up, I never had a reflection of myself in the media. If you're a child and you're seeing that, it makes you feel invisible, like you don't have a part in the world.

AA: It definitely has a deep impact on your self-esteem. Even just right now, my heart is so full seeing all of the reactions to Crazy Rich Asians. I'm seeing so many Asian-Americans who are just like, we never imagined seeing a film that featured main characters that are Asian-Americans. You don't realize how revolutionary it is until you see it. Like the Black Panther moment.

LJ: I was just thinking about when Black Panther came out. We didn't really have a movie like this to show other sides and facets of black people — not in the American or the colonial narrative, but just in this alternate universe. They were able to thrive as a society and really develop this utopia. It was so beautiful. So seeing that pop up, I can feel you 100 percent.

AA: As a little girl looking at pop music, for example, just seeing a woman like Jennifer Lopez that had dark features and a curvy body –

LJ: Beyoncé and Amber Rose also helped me with that too. There's all kinds of women and all kinds of forms. It really shows you, like, I can be whoever I want as a woman. I don't have to set a mold as to what I'm allowed to be.

I decided to start wearing the head scarf when I was a teenager because, to me, that was me publicly defying Islamophobia. As a result, I lost a ton of friends in school.

AA: Those representations almost feel like permission to be ourselves.

LJ: On the note on representation, why were you so inspired to push back with an initiative like Muslim Girl?

AA: It was after I came back from that trip to the Middle East. I had fallen in love with where I came from. I decided to start wearing the head scarf when I was a teenager because, to me, that was me publicly defying Islamophobia. As a result, I lost a ton of friends in school. It became much harder for me to fit in.

I didn't have anyone to hang out with, so I would go home and blog about what I was going through as this Muslim teenage girl in high school in the U.S. Because I didn't have other Muslim teenage girls that I could be friends with, I decided to create a new community online called Muslim Girls, and I wanted it to be a space for us to have conversations relevant to us. Let's talk about the bullying that we're experiencing. Let's talk about having one foot in two or three different cultures.

Within the first five days of it opening, over 1,000 new members joined and half of them were non-Muslims.

LJ: They want to know.

I always jokingly say that Muslim Girl has rebranded Muslim women in the digital space.

AA: Yeah, an accessible un-intimidating place where they can just have a conversation. That's really where it started.

LJ: So, moral of the story, even if you feel alone and nobody gives a fuck, one day you could potentially impact thousands and thousands of humans.

AA: There's a light at the end of the tunnel.

LJ: What kind of impact have you seen as a result of your work?

AA: I always jokingly say that Muslim Girl has rebranded Muslim women in the digital space. It has really helped shift the picture of the Muslim woman being the oppressed, docile, voiceless victim or terrorist, to being an empowered, knowledgeable, autonomous, aware, independent woman.

I also think that because we've done such a good job of showing interest online for Muslim women's stories and narratives, it really has spiked interest for more mainstream publications and mainstream brands to represent our voices, too.

LJ: Amen. Have you ever been told something by a supporter to help define and shape your purpose?

AA: Two years ago, at the United State of Women Summit that Michelle Obama hosted during the Obama legacy. RIP. Bring it back.

AA: It was a huge milestone for me in my career to be invited by the First Lady to this amazing conference amongst these powerhouse women. When I first walked into the venue, this mom ran up to me, saying, "Oh my God, are you Amani? Can my little girl take a picture with you? She's 6 years old and I want her to know that she can be anything." It just hit me so hard. It was this Muslim mom and her daughter. I was really holding back tears. This is literally what it's all about.

LJ: There's a definite energy of fearlessness that you embody, which is so admirable, because I remember when I was in school I would try my best to avoid the bullying because I was so sensitive. I would compromise what I really thought just for the sake of feeling like I belonged somewhere, you know? The world is very cruel and it's easy to get caught up in wanting to just blend in instead of really tell your truth.

AA: I actually was like you, too. I would bite my tongue. I was bullied the crap out of, and that feeling of being silenced was just so scarred into me.

I think that right now, especially with the current political climate, my worst fear is that another generation of young Muslim kids will have to go through the same hardships that we went through. I feel like our generation won't stand for it. People are really waking up and finding innovative ways to push back and it makes me really hopeful.

LJ: I agree 100 percent. Last question. Where do you see yourself in five to 10 years?

AA: Oh my God. Where do you see yourself in five to 10 years?

LJ: I know, right? I love that question though, because it makes you really think about what's important to you.

AA: In five to 10 years, I hope I'm in a place where I'm empowering and influencing on a community-wide or nationwide scale. I really hope that we'll be in a place five to 10 years from now where we're building the institutions that we need for our communities to really push forward, whatever that may look like.