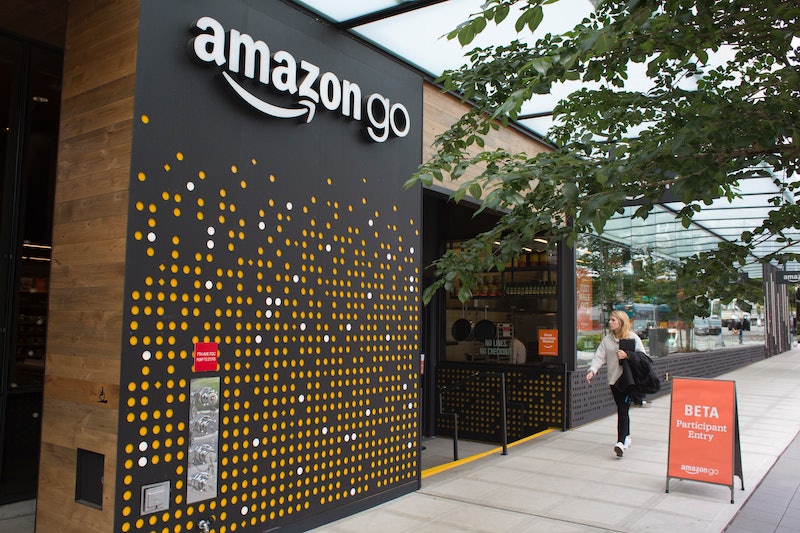 You may recall that Amazon got into the brick-and-mortar supermarket business when it acquired Whole Foods in 2017. In addition, the online retailer has since launched other physical stores like Amazon Go and pickup locations for its food delivery service Amazon Fresh. Now, it's rumored that Amazon is opening its own grocery stores, The Wall Street Journal reported. "Amazon.com Inc. is planning to open dozens of grocery stores in several major U.S. cities, according to people familiar with the matter, as the retail giant looks to broaden its reach in the food business," Esther Fung and Heather Haddon wrote for The Wall Street Journal.

While Amazon itself has yet to announce or confirm the plans, sources reportedly told the WSJ that dozens of stores are expected, with the first one potentially opening in Los Angeles as early as the end of 2019. While the WSJ said a source confirmed that Amazon had signed two other leases for supermarkets, Business Insider reported that an Amazon spokesperson said the company does not comment on rumors or speculation. However, if this news does pan out, it could be a game changer.

Dennis Green reported for Business Insider that the new stores may be smaller than traditional grocery stores but will carry more mainstream products than Whole Foods. Despite their smaller size, the low-cost, diverse array of products could set the stores up as competition for retailers like Walmart and Target, Green said. If shopping at big box stores gives you major anxiety, smaller stores with cheaper products is great news.

This report comes on the heels of news that Whole Foods will phase out its smaller, lower cost 365 Stores. The signage on these locations will be replaced with regular Whole Foods Market signage, Yahoo! Finance reported. Yahoo! cited Whole Foods' acquisition by Amazon as a reason why Whole Foods' prices had lowered, eliminating the need for a lower-priced iteration of the market.

On its website, Whole Foods noted that each item sold in its stores must meet certain quality standards, which limits the products the supermarket offers. "We carefully evaluate each and every product we sell. We feature foods that are free of artificial preservatives, colors, flavors, sweeteners, and hydrogenated fats," the website explained. "Developing our standards, we research everything from food additives to antibiotics in meat production, sustainable seafood to organic skin care. If you want to know what goes into the products you buy, our standards make it easy, because if it doesn’t meet the standards, we don’t sell it."

Because of this, you can't always get your junk food at Whole Foods, which means you have to make a separate trip to another store. While I'm all for all-natch, high quality foods and products, sometimes you just need some Flamin' Hot Cheetos.

Despite Amazon not confirming the announcement, the rumors did affect stock prices. Shares for Costco and Walmart were down 1 percent and Kroger was down 4 percent while Amazon's shares rose, Reuters said in its report on the news. Aside from opening new stores, it's also been reported that Amazon could acquire existing grocery stores for its new venture.

If you're looking for more variety in your grocery-shopping experience, a low-cost, small-scale grocery store is quite appealing. For now, you'll have to sit tight until Amazon reveals whether or not this rumor will become a reality.