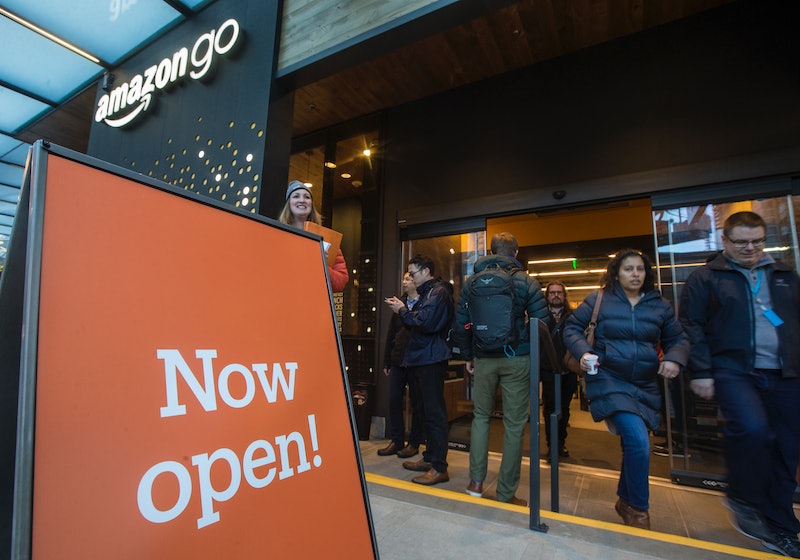 Are we inching closer and closer to living in a Black Mirror episode or is everyone’s life about to get more convenient? According to new reports, Amazon is opening 3,000 Amazon Go stores over the next three years. In other words, we’re all that much closer to cashierless stores being our go-to shopping experience ... and that much closer to the robots officially taking over.

As reported by Bloomberg, someone close to the retail giant said Amazon is considering opening a few thousand new stores by 2021. The expansion would be likely be expensive, mirroring the high-tech shopping experience of Amazon Go’s first store in Seattle. That first store reportedly require $1 million in hardware.

What does a whole entire million dollars worth of tech equipment look like? For starters, shoppers at Amazon Go stores don’t need to interact with any employee, which either sounds like a dream or the beginning of a sci-fi movie. All transactions are done through the app with video cameras and sensors tracking what customers put in their cart. No scanning. No checkout lines. You just scan the app to enter the store and start shopping. This imminent robot takeover is sounding more and more fun and convenient.

Amazon has been quiet about the reports, telling CNBC, “We don't comment on rumors or speculation.” OK, but maybe you could blink twice if this means I’ll be able to fill my cart with Goldfish crackers without judgement from store employees?

Amazon’s first Amazon Go store, which opened in January 2018, was touted as your typical grocery store with slightly more limited selection of products. However, Amazon is reportedly considering narrowing its focus even more. Amazon Go stores going forward would further limit their selection of fresh produce, focusing on having a selection of freshly prepared ready-to-eat foods. This move is reportedly in attempts to appeal to people coming to grab a bite for lunch, with Bloomberg’s source comparing the direction to chains like Pret a Manger.

As Bloomberg points out, this store shift would directly compete with convenience stores like 7-Eleven, fast food sandwich shops like Subway and Panera, and smaller business like mom-and-pop shops and food trucks.

Amazon is hoping to open another ten Amazon Go locations by the end of the year, according to Bloomberg. No word on exact locations for these dozen stores. However, Amazon has previously spoken about expanding shops to “major metro areas” like New York and San Francisco. Amazon is reportedly looking to target “dense urban areas with lots of young, busy, affluent residents” with their new Amazon Go stores. So, will all the money-having, career-minded millennials, please stand up?

With that consumer demographic in mind, the expansion of Amazon Go stores may not be as much of a threat to most convenience stores. Of course, some people still see it as a threat. Namely, the vice president for the National Association for Convenience Stores Jeff Lenard. Lenard told Bloomberg, “Amazon Go already has no lines. The key to success will be convenient locations. If it’s a quarter mile from where people are walking and biking, the novelty of the technology won’t matter. It’s too far away.”

Only time and the shopping habits of hungry, busy, perhaps a little introverted shoppers will tell.