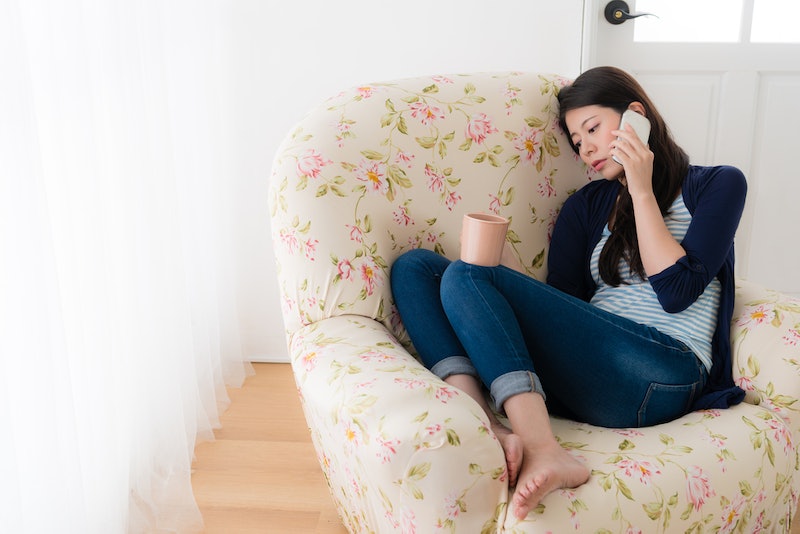 A lot of research on personality types tends to focus on introverts or extroverts: opposites on the social scale, who either expend a lot of energy in social situations and need to isolate themselves to recover (introverts), or who gather energy from social situations and feel revived by company (extroverts). However, these personality types aren't absolute, and some research suggests that many of us may fall somewhere in between, switching between characteristics depending on the situation. But experts tell Bustle that the idea of the "ambivert" — a person who combines elements of both personality types — is more slippery than it seems. Even if you identify very much with traits that are absolutely introverted or extroverted, there's a lot of evidence that people tend to adjust their traits and behavior in reaction to their environment. However, existing somewhere between these two extremes may feel more comfortable for many of us.

The origin of the idea of ambiversion is an interesting one, Ian J. Davidson, a graduate student at the University of York who published a history of ambiversion in 2017, tells Bustle. "The ambivert (personality type) and"ambiversion (personality trait) were proposed as a healthy, normal, middle-ground between the (sometimes pathological) extremes of introverts and extroverts," he says. "Basically, it's someone who can adjust or adapt their behavior toward introverted or extroverted depending on the environment or task at hand." Love to act out with your friends at a party on Saturday, but also to not speak to anyone on Sunday to recharge? Ambiversion may fit.

Sound familiar? That's not surprising. However, Davidson says it's necessary to put it in context. "The terminology is slippery because in the 1920s, psychologists were trying to harness psychoanalytic concepts into quantitative tools (like a personality questionnaire). Part of this process was transforming types into traits, to better mesh with psychologists' belief in the bell-shaped (or normal) distribution of all human traits." In other words, ambiversion was created because psychologists thought that there needed to be a middle ground, not necessarily because they'd identified it in the world. Davidson also points out that ambiversion is actually a very American idea; Edmund Conklin, the American author of Principles In Abnormal Psychology, strongly believed that it was healthy for personality traits to adapt to their environments, rather than be fixed.

Many of us may be able to move from introvert to extrovert qualities and back again without much difficulty, and there may be benefits to that flexibility. New research suggests that introverts who "force extroversion" for social situations actually tend to be happier.

"We asked people for one week to act more extroverted, though we didn't use the word 'extroverted'; we used the words spontaneous, sociable, and assertive," Professor Sonja Lyubomirsky, lead author for that study, tells Bustle. "The next week we asked them to act more introverted, using words like reflective and deliberate." When people adopted extroverted traits, even temporarily, they showed marked increases in happiness in every measure the research team used — and that even applied to people who defined themselves as dyed-in-the-wool introverts. "It doesn't mean that we turned introverts into extroverts," Professor Lyubomirsky says, but it's an important insight into why shifting traits depending on circumstance can be a valuable tool.

Ambiversion has been explored in research to see whether it's just a middle-ground idea or a distinct kind of personality type. A study published in Activitas Nervosa Superior Rediviva in 2014 looked at electrical brain activity in people who were divided into introverts, extroverts, or ambiverts by a personality test. The study found that people who were identified as ambiverts actually showed different brain activity to introverts and extroverts. However, more work needs to be done to identify exactly what that means.

If you identify as an ambivert, that's not surprising; it's a personality trait that's meant to encompass most of us. However, because it's a highly theoretical idea, it's not really one you can test for.

"Honestly, people can decide for themselves if an ambivert is a label they want; I do not know of any current medically or academically recognized instrument that would diagnose or measure one's degree of 'ambiversion'," Davidson tells Bustle. He also says people should be wary of anybody or anything that claims to be able to definitively define their personality type for them. Identifying as an ambivert might help you understand why you experience life as an introvert in some situations and an extrovert in others — and many other people are in the same boat.