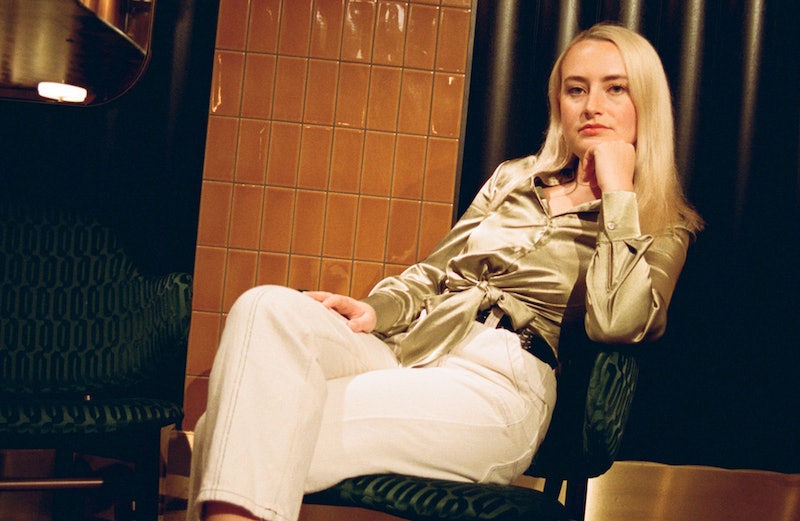 “Chicken Shop!” “Chicken Girl!” “Chicken Shop Date Girl!” are just a few of the many chicken-related names Amelia Dimoldenberg now answers to in public. The 26-year-old comedian reveals she gets recognised on a daily basis thanks to her popular YouTube show Chicken Shop Date, in which she interviews some of the UK’s biggest musicians and artists. Past dates have included AJ Tracey, Aitch, Maya Jama and Daniel Kaluuya, and although she never imagined these stars agreeing to be on the show when she started it six years ago, she had faith it could work. “I always believed in the format and the originality”, Dimoldenberg tells me. “I would be lying if I said I didn’t want it to be this big.”

Her honesty is refreshing, as is her commitment to creating content during a pandemic. “I was going a bit loopy with the solitary confinement vibe, but I’ve been trying to keep positive and look at things from an alternative, funny angle – entertaining people as much as I can with little videos on YouTube and Instagram”, she says. Recent skits include Dimoldenberg finding her headphones under her bed, dyeing her hair pink and learning Simlish as a new lockdown hobby.

Growing up, Dimoldenberg’s childhood dream was to become the editor of Vogue. While she didn’t pursue that for long, her fashion journalism degree from Central Saint Martins proved useful on her path as a content creator. Chicken Shop Date started as a column in a youth magazine, and later expanded to her YouTube channel. Nearly 55 million video views and 400 thousand subscribers later, Dimoldenberg has presented Channel 4’s Meet The Markles mockumentary, has a series on Vice called Mystery Girl, is part of the BBC’s writers' room and recently took part in Celebrity Come Dine With Me. These quieter weeks at home have also led her to write short stories and develop an idea for a future online series. Clearly, she is just getting started.

From a safe distance, we spoke about her journey into comedy, the fear of not doing enough and the future of Chicken Shop Date during the time of social distancing.

"I'm definitely an awkward person and that’s what I’ve always been known for. My mum is very awkward too, but in a very cute, quirky way. I probably get it from her. I think awkwardness [is something] I’ve always been drawn to and I think it’s funny in other people too. It can bring out a lot in other people, which is kind of what I do with Chicken Shop Date, so I’m a big fan."

"I went to the therapist about this because I was really struggling with this constant needing to do more and things never being enough. I was like: 'This is crazy, one day I am going to win this award that I always wanted to and I’m going to get it and it’s not really going to make me happy!' So what is the point of that?

"I’ve now got to a place where I am happy, which I think is important for so many people, to stand and look at the view. One thing that helped was to introduce a new voice into my head, which gave myself more credit. There was a voice that was too loud saying, 'You’re not doing enough!' And now, there’s a new voice that’s like, “Well done!” I feel like I’m doing 100% all the time, so what else can I do? It’s with the gods."

"I’m on TikTok, but it’s SO hard. It’s the hardest one of the social medias, even though at the same time you can go viral so much easier than any other social media platform. It’s so hard because everyone is so good and creative. Everyone is really funny and good at dancing, and you’re just like overwhelmed at the amount of talent human beings can have.

"Even the lip-syncs, I find them hard, but it’s again because I don’t practice enough. I do have a TikTok that has 4.2 million views, I’m not that bad I guess."

On privilege in the media:

"I take my position in this industry very seriously, as I’ve said before it’s important for me to be aware of my privilege and speak about that, because I don’t think enough white people do. I try to do what’s best, and talk about things when they’re relevant to me, and take a step back in the conversation when they’re not."

On the biggest career lesson:

"To not get too emotional about set-backs. If things get cancelled or don’t go to plan, then I have to not take it to heart. Chicken Shop Date is everything to me, so I am very close to it. Also, because I sprung the series myself, things like artists not turning up, financially it’s rubbish as well. There are obviously reasons to feel shit about something, but I’m just trying to move forward and carry on with things if they don’t work out."

On the future of Chicken Shop Date:

"I am going to be concentrating on how I can adapt my work life to this current situation. How do I interview people when I can’t meet them? How do I work when chicken shops are shut? It’s exciting, I guess, to think creatively about how you adapt. And humans are very good at adapting to their surroundings. So, I think that hopefully everyone should be okay, if the government gives them money. [Chicken shops] can’t operate and customers cannot use them, so I hope the government steps in and provides safety nets.

"[The virus] changed everything for me, I’m going to be FaceTiming everyone. A lot of rappers don’t leave their cars and flats, so this might be quite good for me."