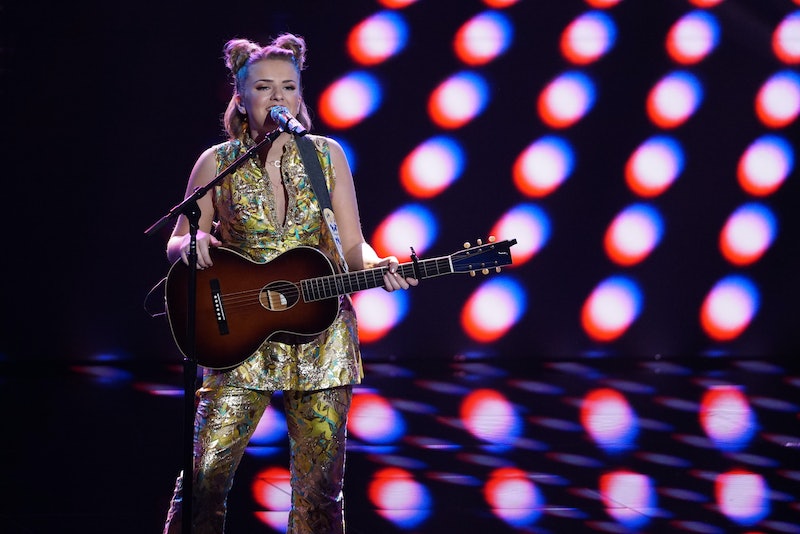 When Maddie Poppe walked onto the American Idol stage to perform The Bangles' "Walk Like an Egyptian," she was all smiles. Her hair was up in two antennae-like buns, and her matching gold outfit felt like a nod to the glam '80s that The Bangles were so famous for. But fans may want to know more about this fun contestant who plays acoustic guitar and has a killer voice. Who is Maddie Poppe from American Idol?

Per her bio on the American Idol website, Poppe is 20 years old and from Clarksville, Iowa. Before she competed on the ABC competition show, she performed at local events, like the Bremer County Fair in her home state, according to the singer's Instagram. She already has an album called Songs from the Basement, which she wrote, recorded, and produced, per her website. The album was released in 2016 and is available on iTunes and Spotify.

Her occupation in her official Idol bio is listed as student, and according to The Messenger, a local Iowa paper, Poppe began attending Iowa Central Community College in 2016 to study graphic design before transferring to Hawkeye Community College a year later for digital mass media. She is, per the article, currently taking a hiatus from school to compete on American Idol.

However, singing has always been her passion. "It’s really the only thing that I have really been good at," she told The Messenger. "I really don’t want to pursue anything else or do anything else. I don’t think I could ever stop doing it or walk away." In fact, per the same interview, Poppe's dad was the one who started it all. "When we were a lot younger, my dad had us sing Christmas songs, and he would make it into a CD and send it to our grandparents," she said. "I did a lot of singing around the house. My dad has always been in bands growing up, so I would get up and play with him occasionally."

However, before Poppe got onto American Idol, she was briefly on The Voice, per an interview with Waverly Newspapers, another Iowa paper, but she didn't get very far. "I think every musician has to be told no before something really big happens for them,” Poppe said. “I really think I needed to go through that experience because … it tested my determination [and] my perseverance.”

But she hasn't let those bumps in the road get her down. In the same Waverly Newspapers interview, she is described as "a self-described couch potato" who "devours episodes of The Office on Netflix until 3 a.m." Indeed, she has posted Instagrams about The Office several times, showing she has a goofy sense of humor. Not to mention that her fun outfits show off her unique, creative side.

Poppe also seems to get along well with her competitors, her Twitter feed filled with retweets from American Idol contestants like Catie Turner and Caleb Lee Hutchinson, as well as interactions with the three judges: Lionel Richie, Katy Perry, and Luke Bryan.

Luckily, Poppe has been consistently knocking it out of the park with her performances, which have included a duet with Colbie Caillat and a rendition of the folk song "Brand New Key" that prompted the songwriter herself to tweet, "Glad they liked my song. I wrote it in 1971. Last Sundaynight it lived again! Maddie Poppe did me proud."

Poppe told Waverly Newspapers that she's been watching American Idol since she was seven years old. “It just seemed right to audition for this because it’s something I kind of grew up on," she said. And audiences are so glad she did. In her audition for the show, Lionel Richie told Poppe that she had "that storyteller voice," and her easygoing stance as she performs and effortless range proves that.

Poppe's presence on the show can be described by Luke Bryan's response to Poppe's cover of "Brand New Key." "I don't know that song," he said, "but, like, I wanted to go skipping down a beach."

Will she go skipping to the finale? Fans will have to keep tuning in to find out.