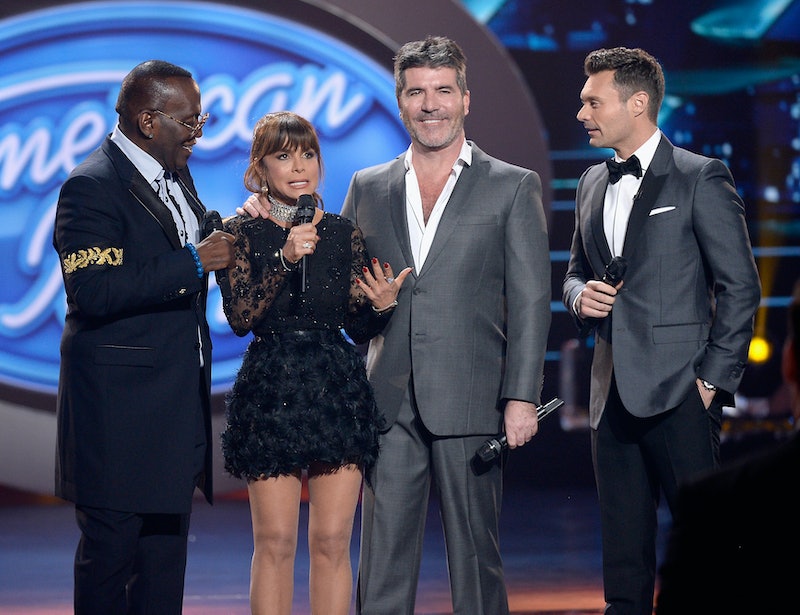 Before you could even get a chance to miss it, the OG singing competition reality show is potentially making a comeback. Yes, get this: according to Variety an American Idol revival is already in the works at NBC, with Fremantle Media currently shopping a revamp around to different networks. But wait, how is that possible? No, seriously, how (and why) are they going to execute this?

Well, everything is still in it's formative pitch stages, so there's little information and mostly hearsay out yet. It's not even confirmed by the network, after all. As far as bringing it to NBC goes, the channel would sacrifice it's pre-existing Idol-knock-off competition show The Voice from two cycles per year to one.

But it's fair to say that it doesn't necessarily make any sense to do that. Not just because one singing-competition show (or two? let's not forget NBC has America's Got Talent) per channel is more than enough, but because Idol was long overdue for retirement. At its 2006 peak, the series was pulling in 36.4 million total viewers, whereas the final 2016 season a decade later only drew in a still respectable but comparatively weak 9.1 million viewers. It had a good run, but there was only a decline going from there.

There is also a slight question of who would return as the judges and host, because the "revival" part would imply somebody's coming back. The last round of judges included Jennifer Lopez, Keith Urban, and Harry Connick Jr, while Ryan Seacrest has consistently emceed Idol from the beginning. Lopez, for her part, is in the middle of a Las Vegas residency, so we can't expect her to break away from that anytime soon. Then again, after the original line-up of Paula Abdul, Randy Jackson, and Simon Cowell began to dissolve, Idol has been fine with hosting a rotating door of celebrities. It's possible that none of the judges from the past 15 years will return... although imagining the show without Seacrest seems potentially sacrilegious.

Ultimately, it's weird that we're even getting the slight tease of a resurrected American Idol even less than a year before it went off the air. Truth is, Idol put so much stock milking and promoting season 15 as THE FINAL SEASON, pulling out all the stops. Everyone showed face to make a memorable last impression, from Kelly Clarkson to William Hung. But perhaps this new American Idol will come with some kind of fresh twist that will reinvigorate the series? Stay tuned.