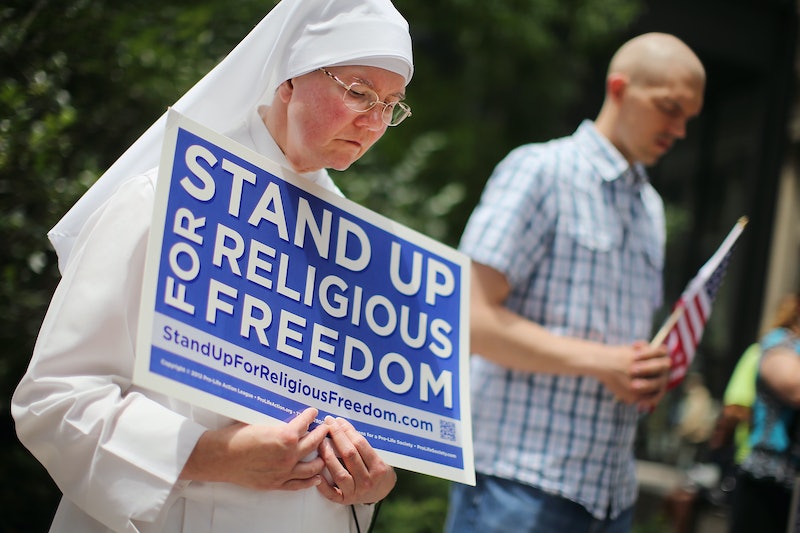 On May 4, Donald Trump issued an executive order that would allow employers to deny employees birth control coverage under the protection of religious freedom. At a Rose Garden ceremony with nuns from Little Sisters of Poor, Trump signed the order, declaring, "We are ending the attacks on your religious liberty.” However, some reproductive rights experts counter that women and infants may pay the price for this "liberty" with their lives.

As a follow-up to Trump's order, a few weeks later, federal officials submitted a draft of a rule that would enable Trump's rollback of the contraception mandate that was part of the Affordable Care Act. The White House Office of Management and Budget website currently says it is reviewing a "final interim rule."

For those uninitiated with the order itself, Trump's Religious Liberty Executive Order addresses two main issues: Firstly, it enables tax-exempt churches to endorse political candidates without facing potential repercussions from the IRS. Secondly, it instructs the Departments of Treasury, Labor, and Health and Human Services to "address conscience-based objections to the preventive-care mandate," which translates to amending the portion of the ACA that enforces birth control coverage through employers.

While enabling employers to opt out of birth control coverage has a wide range of repercussions, denying women access to affordable reproductive health care could also contribute to America's maternal and infant death rate, which are both alarmingly high for a wealthy, developed country.

The recent findings from a six-month investigation carried out by NPR and ProPublica revealed that when compared to other developed countries, the United States has the highest maternal death rates, and they continue to rise.

To give some context, a piece of comprehensive data spanning 25 years, released in September 2016 by the Institute of Health Metrics and Evaluation, revealed that the U.S. maternal death rate was triple Canada's in 2013. While there is no updated comparison between the two countries for 2017, the United States remains the worst of the developed world for maternal death.

The president of the large grassroots feminist organization National Organization for Women, Terry O'Neill, tells Bustle about her concerns for Trump's rollback of contraceptive coverage, and how she believes it will only increase maternal and infant death rates in the United States.

A study released by Guttmacher Institute in 2004 revealed that in the 30 years following Roe v. Wade, access to legal and safe abortion caused the rates of maternal deaths from unsafe and self-administered abortions to go down.

The contraceptive rollbacks enabled through the Religious Liberty Executive Order further feeds concerns over the possibility of Trump overturning Roe v. Wade, and therefore, returning the United States to an even more dangerous time for women, says O'Neill.

"Roe v. Wade was decided in 1973. So, from the early '70s into the '80s the maternal mortality rates were going down. That’s the same time that the pill became more widely available and affordable than when it first came out in the '50s," O'Neill says, "Now in the 2010s, what we’re finding is many women don’t have access to the birth control that’s right for them unless it is covered fully by Medicare."

The potentially significant cuts to Medicaid under Trump's proposed budget may exacerbate both concerns about contraception access and pregnancy health care, especially for low-income women.

It is still not certain what will be the ultimate fate of the birth control mandate, but if the drafted rule is instated, it seems likely mothers, especially low-income ones, may pay the price.