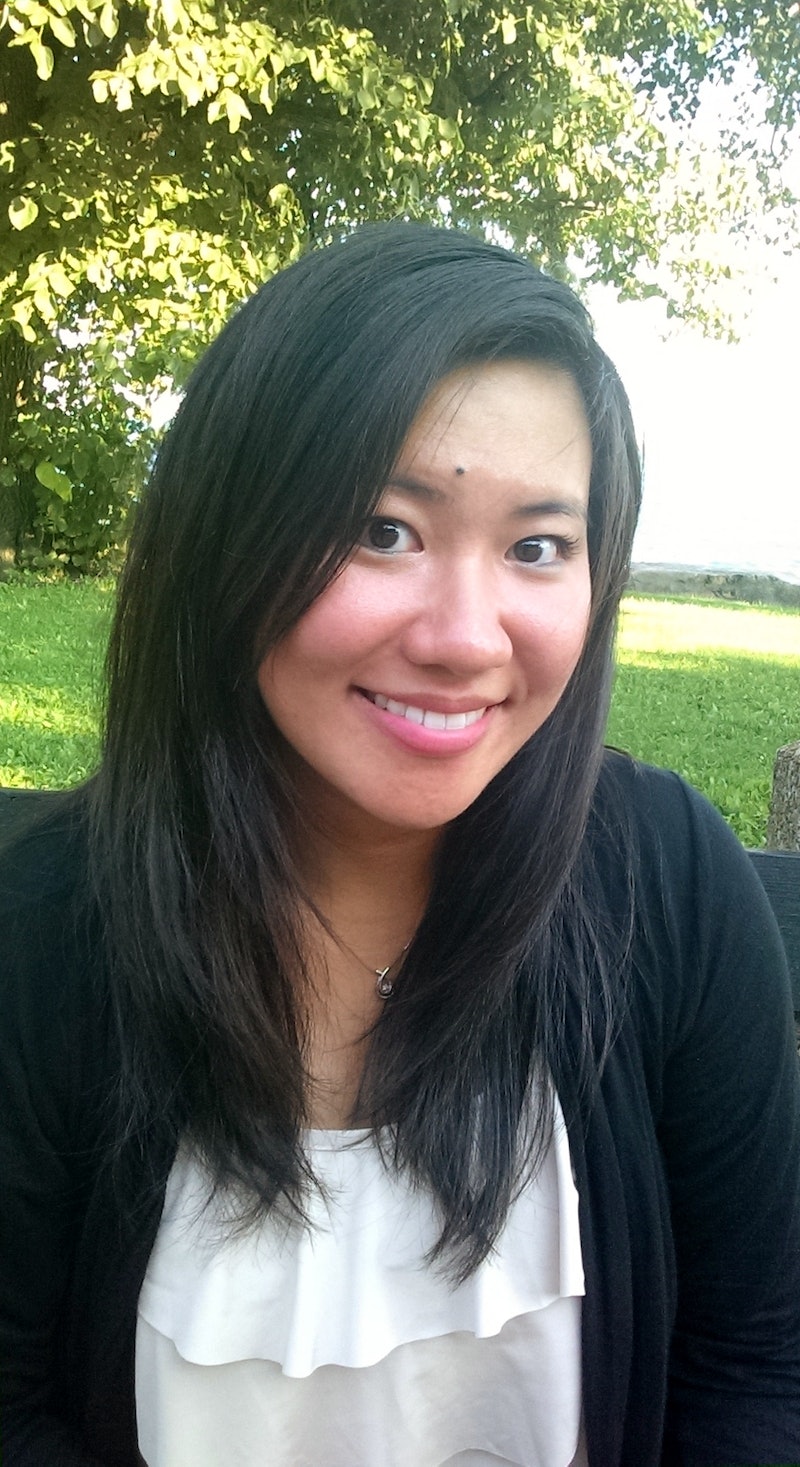 Half the year is gone, and it's already time to your 2018 TBR list ready. One of the must-read books on my list is Gloria Chao's debut novel, American Panda, out next year from Simon Pulse. This gorgeous novel speaks to the experience of straddling two identities as a second-generation American — all the while, falling in love and figure out one's path in life. Gloria Chao spoke with Bustle about the ways the novel mirrors her own experience — plus, she gave us an exclusive first look at the cover for American Panda.

The novel follows 17-year-old Mei Lu, a freshman at MIT. Mei Lu is Taiwanese-American, she skipped the fourth grade, and she absolutely detests germs. And, most importantly, her life has been entirely pre-planned by her parents: she will become a doctor, marry a parent-approved Taiwanese Ivy Leaguer, and have as many children as possible. There are quite a few things that could go wrong with this plan — after all, Mei hates germs, which makes studying to become a doctor mildly problematic at best; plus, her crush is most definitely not Taiwanese; and she hasn't even begun thinking of babies. It's hard enough starting college without having to worry that every choice could lead to your family's epic disappointment. Mei certainly has her hands full.

Chao, an MIT-educated dentist-turned-author, was also forced to grapple with the weight of family expectations when she decided to give up her career and turn to writing.

"I didn’t come into writing until late," she tells Bustle. "Part of it was that my parents were very traditional. It was understood I would get a job in the medical field. They were excited about the dentist career track. But they wanted me to stick it out even though I was unhappy. The only thing that took me away from the daily struggles was reading. That’s when I fell in love with YA books. We didn’t have reading requirements, and I kind of forgot how much I loved it but I found my way back."

"For me it was a really hard decision," she adds. "It took a year to admit I wanted to do this. It was a struggle because of my parents and how they were unhappy with my choice. I asked myself, 'If I give up my career and nothing happens, would I regret this?' The answer was no. I would be okay if no one reads my books. But I would not have regrets."

Chao's novel comes at a time when the publishing industry is making a slow but steady effort to publish more diverse books, an effort that's been steadily growing since the inception of We Need Diverse Books in 2014. A funny, heartwarming contemporary novel about a Taiwanese-American girl coming-of-age, American Panda is certainly a step in the right direction.

Chao says, "I wrote the book I wish I had during high school. I was struggling with culture and tradition. I didn’t know where I fit in. I wish I had known in high school that I wasn’t alone. I want readers to know that if you don’t know how to communicate when there’s a cultural gap, that you’re not alone. The reason my parents were unhappy is because we didn’t communicate. I want readers to know that it’s okay if you feel you don’t belong in either culture."

While no one book or author can represent an entire group of people, they can connect with multiple audiences based on universal themes like self-discovery, family, and love. Personal experience adds to the richness of the story Chao tells in American Panda.

"Everything in this book is based in events in my life and people I know. It is a love song to the struggles that I went through," she says. "I worked so hard to keep everything authentic. I know I can't capture every Asian experience. I wanted to make sure that I captured at least one truthful story and that story is mine."

Bustle is proud to present the cover for American Panda, out in 2018:

"I love that [the cover] represents [Mei Lu's] struggle with her identity in small ways," Chao says. "Even the words American and Panda are in different fonts. But the color is bright and hopeful, which is what ultimately, the book is about."