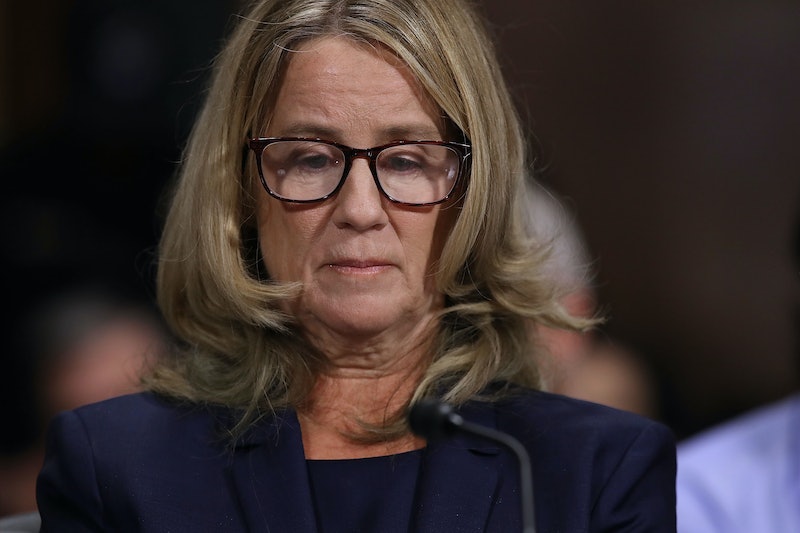 On Thursday, Christine Blasey Ford and Judge Brett Kavanaugh appeared before the Senate Judiciary Committee to testify about the sexual assault Ford accused Kavanaugh of. Now, on Monday, a Quinnipiac poll shows most Americans believe Ford over Kavanaugh, though the numbers also reflect a stark divide among race and political party.

Forty-eight percent of total participants say they believe Ford's allegation that Kavanaugh sexually assaulted her when they were teenagers in the 1980s. (Kavanaugh has repeatedly denied the allegation.) Only 41 percent believe Kavanaugh, according to the Quinnipiac University poll. Forty-nine percent of the polled participants also believed that Kavanaugh was "the target of a politically motivated smear campaign."

The assistant director of the poll, Tim Malloy, said in the press release for the report, "Dr. Christine Blasey Ford is winning the trust of American voters, who overwhelmingly believe she is honest. But about half of voters say Judge Brett Kavanaugh is the target of a smear campaign." According to Quinnipiac University, researchers studied the responses of 1,111 voters and noted that the poll carried a margin error of 3.7 percentage points.

Researchers asked participants, "As you may know, President Trump has nominated Brett Kavanaugh to the Supreme Court. Do you think the U.S. Senate should confirm Brett Kavanaugh to the Supreme Court, or not?" The divide is clear along gender lines. When it came to women, 55 percent of the participants opposed Kavanaugh's confirmation to the Court, while only 37 percent supported it. Among men, 49 percent supported confirming Kavanaugh and 40 percent opposed it.

Collectively, slightly over half of the white participants favored Kavanaugh's confirmation at 51 percent. Among Hispanic people, the support for Kavanaugh stood at 30 percent, while 65 percent opposed him. A whopping 81 percent of polled black participants said they were against Kavanaugh's being confirmed, with a mere 11 percent saying they approved of it.

When it came to the question of how Senate Democrats and Republicans handled Ford's allegation against Kavanaugh, people remained roughly disapproving of both parties. For Senate Democrats, 52 percent "disapproved" of how they "handled the accusation," while 38 percent approved. Fifty-six percent disapproved of how Senate Republicans handled the allegation, while 33 percent gave a thumbs up. When it came to Trump, 49 percent of the polled participants disagreed with the president's "handling" of Ford's accusation.

If there was a point that participants seemed to agree on, per Malloy, it was this: "What voters agree on is letting the FBI try to sort out the events in the pursuit of the truth."

More like this
24 History-Making Black Women You Probably Didn't Learn About In School
By Ayana Lage and JR Thorpe
Gillian Anderson's New Netflix Drama Is *Nothing* Like 'Sex Education'
By Frances Stewart
Matt Hancock’s TikTok Is The Most Matt Hancock Thing Ever
By Sam Ramsden
Eurovision Has Been Given A Whole New Look Ahead Of Its Liverpool Debut
By Bustle UK
Get Even More From Bustle — Sign Up For The Newsletter
From hair trends to relationship advice, our daily newsletter has everything you need to sound like a person who’s on TikTok, even if you aren’t.