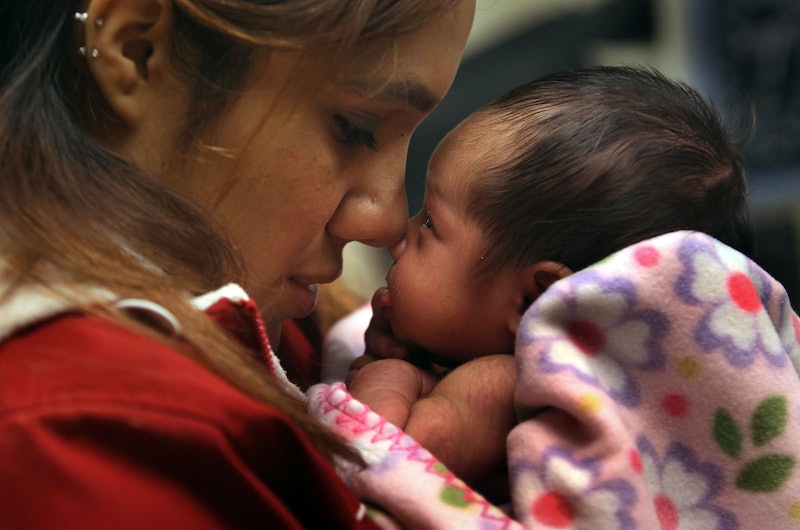 According to a recent ProPublica report, featuring information from The Lancet, the U.S. maternal mortality rate (26.4 deaths per 100,000 live births), is almost three times higher than the United Kingdom (9.2), more than three-and-a-half times higher than Canada (7.3), and almost seven times higher than Finland (3.8). Perhaps even more problematic, however, is that fact that while the number of women who die in the United States during the maternal period is rising, little action has been taken to address the issue.

Since 1990, the United States' maternal mortality ratio has more than doubled, hitting 21 to 22 deaths per 100,000 live births in 2014, a recent study for the Society for Maternal-Fetal Medicine reported. ProPublica's report suggests that "every year in the U.S., 700 to 900 women die" from causes related to pregnancy and childbirth.

Disturbingly, a 2015 report from the World Health Organization concluded that "about half of all maternal deaths in the USA are preventable." Research also indicates that while maternal mortality affects women of every race, religion, and socio economic background, it disproportionately affects African Americans, low-income women, and those who live in rural areas.

The rate at which the United States' maternal mortality ratio has grown is also disturbing. According to an analysis of data from the CDC and the National Center for Health Statistics (NCHS), the estimated maternal mortality rate for Washington, D.C. and all states excluding California and Texas (where noticeably different maternal mortality trends caused the states to be analyzed separately) increased at a rate of 26.6 percent from 2000 to 2014.

"The current maternal mortality rate places the United States far behind other industrialized nations," Eugene Declercq, a professor of community health sciences at Boston University School of Public Health and the co-author of a 2016 study in maternal mortality rates in the United States, said in a statement. "There is a need to redouble efforts to prevent maternal deaths and improve maternity care for the four million U.S. women giving birth each year."

So what's behind the United States' rising maternal mortality rate? Factors such as inconsistent access to reproductive health services; a rise in Cesarean births; unaddressed chronic health problems in new mothers; the fact women are having children later in life; and a greater focus on fetal and infant health are all believed to contribute to the United States' high maternal mortality rate.

Further compounding the issue is that little has been done to try and address the United States' rising maternal mortality rate. According to NPR, only a small portion of federal and state funding goes toward programs focused on the health of the mother. "Under the Title V federal-state program supporting maternal and child health, states devoted about 6 percent of block grants in 2016 to programs for mothers, compared to 78 percent for infants and special-needs children," NPR reported.

While there has been no federal effort to address the country's rising maternal mortality rate (and the Republican-backed American Health Care Act calls for slashing Medicaid funding), one state has managed to lower its maternal mortality rate, thanks in part to toolkits developed by the California Maternal Quality Care Collaborative. According to data from California's Department of Public Health, the state's maternal mortality rate dropped to 7.3 deaths per 100,000 births in 2013. The CMQCC is currently working with organizations to encourage Congress to take action nationwide.

But the United States' rising maternal mortality rate may soon receive more attention in Washington: the Preventing Maternal Deaths Act of 2017, recently introduced in the House, would help states improve how they review cases of maternal death to identify how to prevent them.