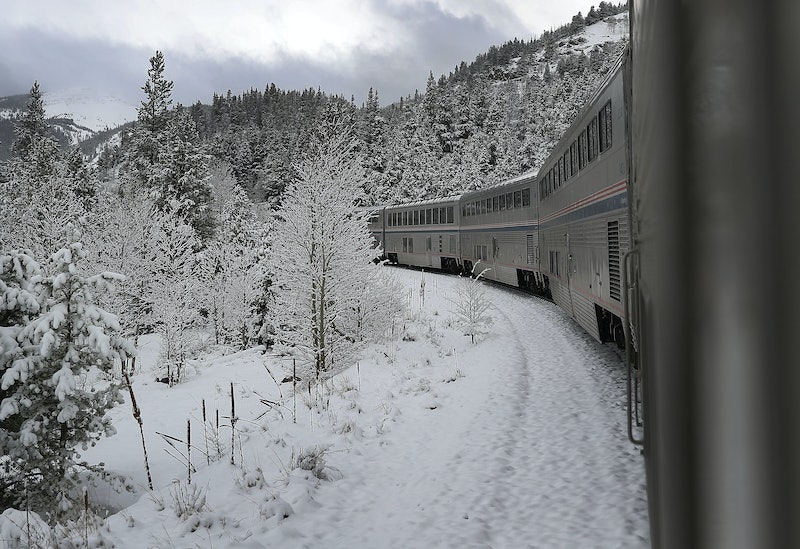 Every day, an Amtrak train in Seattle begins its journey towards Los Angeles, which takes 35 hours under the best of circumstances. That was not the case on Sunday, when a freak snowstorm in Oregon caused a tree to fall and block a train's path. Now, an Amtrak train has been stuck in Oregon since Sunday — more than 30 hours — with 183 people trapped on board.

Despite it seeming like a dire situation, though, CNN reports that the passengers have been handling it quite well. "It's just been like a giant kumbaya party," Rebekah Dodson, a passenger, told CNN on Tuesday. "Strangers are playing cards. A teenager played his ukulele to kids to get them to sleep. Ladies who have never met before were dancing in aisles."

The train is called the Coast Starlight, and it's one of Amtrak's most gorgeous offerings because of the route it takes down the West Coast, through the Cascade Range, and later with views of the Pacific Ocean. But Sunday's train was met with an unforeseen delay near the town of Oakridge, Oregon, when it ran into a tree that had fallen onto the tracks, according to the BBC.

Central Oregon has been seeing record snowfall in the last several days, according to Oregon Public Broadcasting. The train got stranded about 45 miles southeast of Eugene, Oregon, which got 8.5 inches of snow on Monday — just shy of a record for the city. The ongoing snowfall made it difficult for Amtrak workers to make it out to where the train was stuck to clear the tracks, which left the passengers in a tough spot.

Luckily, Amtrak also announced that the train was moving again on Tuesday morning, in the direction of Seattle. NBC News reported that the plan was to let passengers off at Eugene.

While the passengers weren't freezing or starving, there were still difficulties, according to NBC News — mostly related to stress and the mere fact of being cooped up in a train for so many hours.

"There has been so little communication from Amtrak. I am very disappointed,” Kim Shelton, another passenger, told NBC's Today. “We’ve had two people have anxiety, heart-related issues. We have just had to take care of each other. There has been no help from outside.”

Amtrak issued a statement to NBC News apologizing for the "extended delay" and promising compensation to the passengers who were stranded on the train.

"With more than a foot of heavy snow and numerous trees blocking the track, we made every decision in the best interest of the safety of our customers during the unfortunate sequence of events," said Scot Naparstek, the executive vice president and chief operating officer. He added that Amtrak saw the train as the best place for the stranded passengers because it had "food, heat, electricity and toilets."

There's one group of passengers who could find themselves in additional trouble, though: Los Angeles-bound students who, as CNN reported, weren't being given a pass with "stuck on a train" as their excuse for missing class.