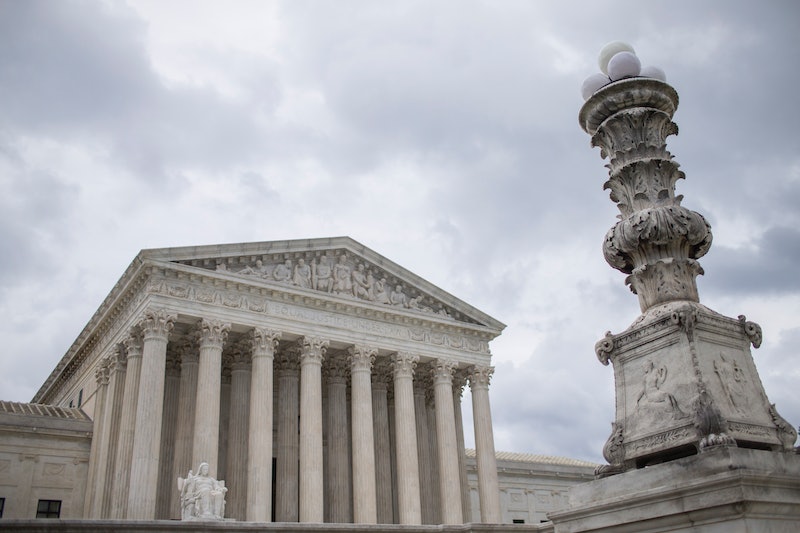 President Trump's next Supreme Court pick could reshape the court for decades to come. Since Justice Anthony Kennedy announced his retirement, it's been reported that one of his top choices is a Circuit Court Judge for the Seventh Circuit in Chicago. Her life experience with her work and her family will influence any potential decisions, and Amy Coney Barrett's husband, Jesse, shares many of those values — especially given their similar religious views.

Coney Barrett first underwent national scrutiny in 2017 for her first national confirmation hearing. Both women's and LGBTQ groups drew attention to some of her more controversial statements, particularly about Roe v. Wade, which she called "erroneous." Her husband, Jesse, who is a lawyer who works as a U.S. prosecutor and is a devout Catholic, seems to share some of these personal beliefs. Bustle has reached out to Jesse for comment.

Much of this is known because Coney Barrett has been very open about Jesse. She introduced him to the Senate Judiciary Committee when she was up for confirmation to the U.S. Court of Appeals in 2017. "I hit the jackpot when I married him. We have been married 18 years, with each year better than the last," Coney Barrett told the committee.

She also explained what he does for a living. He's an Assistant United States Attorney at United States Department of Justice for the Northern District of Indiana, South Bend Division. Jesse has worked there since 2005, according to Notre Dame Law School, where he graduated from in 1999 and also works as an adjunct professor.

The most controversial views the two share have plenty to do with their membership in the Christian group called People of Praise. The New York Times reported on these connections in 2017, although they were never brought up at the confirmation hearings. There, Coney Barrett only mentioned that she was "a faithful Catholic."

But according to the paper's report, both Coney Barrett and her husband, Jesse, belong. Members, The Times reported "swear a lifelong oath of loyalty, called a covenant, to one another, and are assigned and are accountable to a personal adviser, called a 'head' for men and a 'handmaid' for women. The group teaches that husbands are the heads of their wives and should take authority over the family."

The group has refrained from the wording "handmaid" in more recent writings. All who belong are expected give 5 percent of their earnings to the group, and has a lot of traditions usually linked to Pentecostal churches like speaking in tongues — although The Times reported that 90 percent of their members are catholic.

Jesse has not spoken as publicly about his relationship with Coney Barrett. One of the times that he did speak publicly about her was at her investiture to the U.S. Court of Appeals that was hosted by Notre Dame. That's where the first met in Law School. At the investiture he spoke at length about going through life's changes, although the specifics weren't reported. "There is one thing that hasn’t changed — it is humbling to be married to Amy Barrett,” he told the crowd, according to an article published by the school.

The two have seven children. Coney Barrett she stressed their importance during her last confirmation hearing and acknowledged each one by name. She told the committee: “Emma is 16. The first apple of our eye. Vivian, directly next to Emma, is 13. Vivian is our miracle. Vivian joined our family… She was born in Haiti... Tess, sitting next to Vivian, is also 13-years-old.” She went on to name the younger four children too, noting that one was also adopted from Haiti after the earthquake and that another had special needs.

Coney Barrett's husband, and family, are a key part of her life, and do seem to hold the same controversial views.