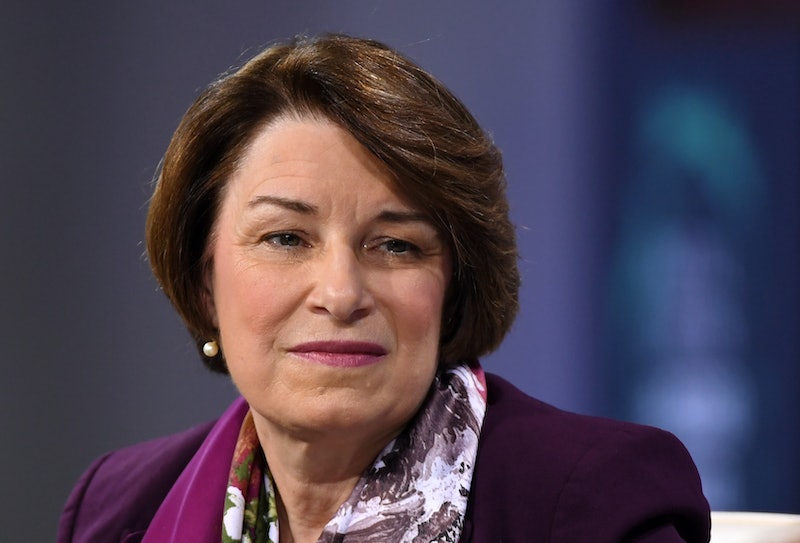 In a field of Democratic presidential hopefuls that are touting proposals like Medicare for All and “free college for all,” Amy Klobuchar is making a case for policies that she says don’t “go on a bumper sticker.” She’s a co-sponsor of the Green New Deal, but warns that it will require compromise. Instead of supporting free college like some of her rivals, she wants to tackle affordability by expanding the federal Pell Grant program and allowing borrowers to refinance their existing loans. And she’s expressed reservations about immediately implementing Medicare for All, instead advocating for a public option through Medicare or Medicaid and bringing down the cost of prescription drugs.

The three-term U.S. senator from Minnesota is hoping that her positioning as a Midwest pragmatist appeals to voters who are looking for an alternative to the current front-runners. And she’s laying out an argument for where, how, and why she’d be the best candidate to beat Donald Trump in a general election matchup.

Bustle's Alicia Menendez spoke with Klobuchar about her commitment to finally closing the “boyfriend loophole,” the increasingly political fight around abortion access, and why she isn’t on board with “free college for all.”

Alica Menendez: You’re often described as a “centrist candidate.” Do you find that description accurate, and what does it mean to be a centrist Democrat in 2019?

Amy Klobuchar: I consider myself a proven progressive, because that means you’ve actually made progress. I’m someone that comes out of a state with a strong Democratic Party, in the tradition of [former U.S. Senator from Minnesota] Paul Wellstone who was one of my mentors, who always believed in grassroots politics. To me, when you have over 100 bills where I’ve been the lead Democrat, that’s showing that you’re making progress and that you can get it done.

That’s an important thing for people to think about as we go into this election. You want someone heading up the ticket who can stand for progress on reproductive justice, on climate change, which was the lead issue I talked about in my announcement, even though I was in the middle of a blizzard. The president made me fun of me for talking about climate change and called me “snow woman.” To which I responded, “The science is on my side, Donald Trump. I’d like to see how your hair would fare in a blizzard.”

I have won in the Midwest over and over again, in districts that Donald Trump won by over 20 points. I’ve won every race, every place, every time, including in the reddest of districts. As we look at what labels mean, I think the most important label is “winner.”

AM: You’re an ardent supporter of the Senate passing a reauthorization of the Violence Against Women Act (VAWA), which includes a provision based on your and Congresswoman [Debbie] Dingell’s legislation to close what is commonly referred to as the “boyfriend loophole.” Why is the boyfriend loophole so important to the larger VAWA effort?

AK: Right now the law says that if you get convicted of domestic abuse against someone that you’re married to, or someone you live with, then you can’t go out and buy a gun. That makes sense because there’s a high correlation between people convicted of domestic violence, and then, if they get a gun, actual or attempted homicides resulting from it. What they don’t include is boyfriends or girlfriends. This makes no sense, because half of domestic homicides are actually committed by people who aren’t married, but are in a dating relationship. That is a loophole and we need to close it.

There are, of course, very important other pieces of legislation that I will champion as president, including background checks and closing the gun show loophole, also the assault weapons ban and banning bump stocks. But the boyfriend loophole is something that if we don’t get it done this year, I could actually do it myself [as president]. That’s something I would do in the first 100 days, then make sure the bills get introduced and passed.

AM: You’ve declined to support “free college for all,” arguing instead for expanding Pell Grants and refinancing student loans. How then do you tackle the root causes of student debt?

AK: I am very focused on making college much more affordable. I just don’t want a good chunk of that money to go to the wealthiest kids. Free College for All, when you look at it, 10% of kids in public colleges come from families that make over $200,000 a year. About 30% of the kids are in the top fifth of families that are income earners. So that’s why I think it is much better to look at making sure the money goes to everybody else. That is why my proposal, which takes Pell Grants and doubles the amount to $12,000 a year, has them not just go to families that make up to $50,000 a year, but up to $100,000 a year.

I would expand tax credits to make it easier for people to afford college, free two-year community college and certifications. Finally, make it easier to repay loans. Our repayment of loans program right now for people who go into teaching and other forms of public service is really a mess. I would fix that and expand it to other occupations as well, in addition to making it less expensive by reducing the interest rates. I know that doesn’t go on a bumper sticker, but I think it makes much more sense. I would pay for it, with the Buffett Rule [a minimum tax rate of 30% on individuals who make more than $1 million annually]. That brings in $124 billion right there.

AM: Just this week an internal debate within Planned Parenthood is becoming a public, a philosophical disagreement over whether access to abortion should be framed as a question of health care access or a political fight. Which path do you believe is the best way forward?

AK: I don’t really know all the details of whatever happened internally. But I do know Planned Parenthood stands for both. Planned Parenthood stands for health care access, but it also clearly, especially right now, stands for taking on the cause of allowing for accessible and safe abortion. You’ve got a situation right now where, in states like Alabama and Georgia, they basically took measures that I don’t think we thought would happen after the fights we’ve been through on reproductive justice.

The Alabama law would actually put doctors in prison for 99 years, and yet, over 75% of the American public would not want to overturn Roe v. Wade. These guys have really gone way too far in terms of limiting women’s rights. The public is with the Democratic Party and Planned Parenthood on this one. In addition to the president cutting funding for Planned Parenthood, which is going to be a major struggle for so many women who simply go there to get their health care.

AM: You were quoted as saying that primary voters are “tired of being duped” and “have heard time and time again, people say, ‘Oh, I want to do this, I want to do that.” Where do you think your fellow contenders are over-promising?

AK: My major problem of making promises that are broken is with Donald Trump. He is someone who has now literally lied to the public over 10,000 times. He has made promises that he’d bring prescription drug prices down. They’ve gone up in double digits on over 2,000 drugs. On election night, he promised he’d do something on infrastructure. No big deal ever came our way and we still can’t drink the water in Flint. There are crumbling schools in Baltimore, and problems with transit all over this country. The tax bill, a lot of the money went to the wealthiest, to the point where it garnered us $1 trillion in additional debt. Billions of dollars went to the pharmaceutical companies.

AM: Your daughter is a millennial woman, so you have raised a member of this generation. What do you see as the biggest challenge facing millennial women?

AK: The biggest challenge, on top of climate change and reproductive justice, is economic. We still have a situation where men are making more than women, and where a white man is making a dollar for every 61 cents that an African-American woman makes. You have the problem of immigration, which falls so much on the shoulders of women and kids. All of this to me, at its core, is an economic issue.

We talk about childcare and paid family leave, but we don’t talk about retirement. We know women live longer than men, but we also know that they have less money when it comes to retirement. That’s why I’ve put forward an idea called UP-Savings account. It’s for people who, in addition to keeping Social Security strong, may work at workplaces where there isn’t a 401(k).

This is the most diverse generation that we’ve ever seen in American history. It is the most global generation, and I mean that in terms of caring about the world around them, caring about people and how people are treated, and that people aren’t discriminated against based on their race or ethnic background or where they live or where they worship or who they love. A case has to be made for this generation that they are going to have to stand up and pick up the mantle of this election against this mean-spirited rhetoric. Against a president that tweets whatever he wants, but doesn’t respect the amendment that allows him to do it. Against a president that is constantly saying racist and xenophobic things, including against four congresswomen, telling them to go back to the country where they come from, when they are in fact American citizens, including saying that there’s two sides when it comes to Charlottesville. What I love, having a daughter who is 24, is seeing the world through her lens and seeing it through the lens of her friends. His views are inimical to everything they stand for.

This interview has been lightly condensed and edited for clarity.

More like this
It’s Official: 'The Bachelorette' Is No Longer A Fairy Tale
By Samantha Allen
The 5 Best Underwear For Preventing Wedgies
By Lisa Fogarty
Beyoncé & Madonna’s “Break My Soul” Remix Honors A Group Of Black Icons
By Stephanie Topacio Long
Are John Legend & Kanye West Still Friends? The Singer’s Latest Update Is Candid
By Brad Witter
Get Even More From Bustle — Sign Up For The Newsletter