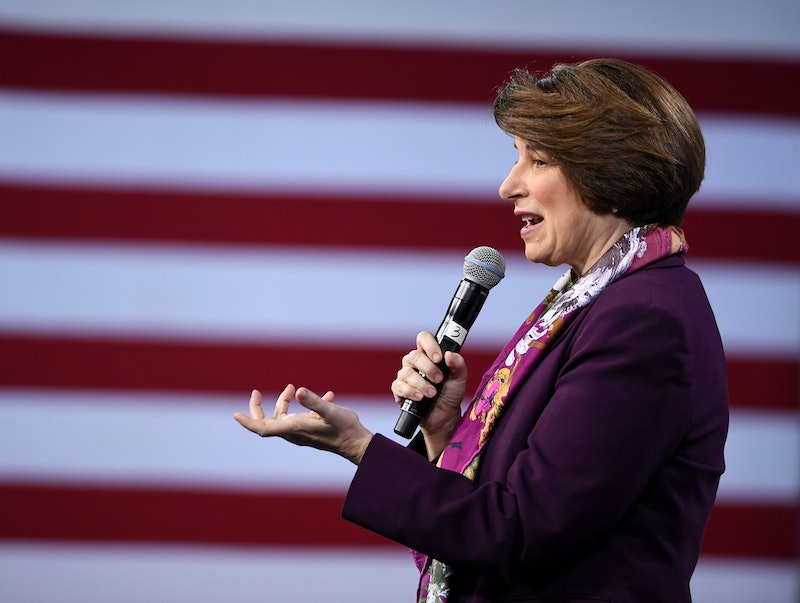 Before she launched her candidacy for president, many came to know Sen. Amy Klobuchar through her tense exchange about alcoholism with then-Supreme Court justice nominee Brett Kavanaugh during a hearing. As the senator from Minnesota has now made clear, it's an issue that's close to her heart, and so her first major policy proposal addresses exactly that. On Friday, Klobuchar introduced a plan tackling addiction and mental health issues, and it would involve $100 billion going towards prevention, treatment, and recovery costs.

"Amy’s dad struggled with alcoholism and she saw the toll that substance use disorders can take on families and communities," Klobuchar's team wrote in a Medium post explaining the plan. "Her dad climbed the highest mountains but also sank to the lowest valleys because of his battle with alcoholism."

Her plan, as the Medium post explains, would "combat substance use disorder and prioritize mental health, including launching new prevention and early intervention initiatives, expanding access to treatment and giving Americans a path to sustainable recovery."

Klobuchar also laid out her proposal to pay for this plan: an additional tax on active opioid ingredients in drugs, which the drug manufacturers or importers would have to pay, as Politico explained.

Klobuchar's plan has three main sections, as The New York Times explained: prevention, treatment, and what she calls to as "ongoing recovery," which refers to job programs and expanded social services for those recovering from an addiction, treatment programs for nonviolent drug offenders, and training for police officers on how to work with those suffering from addiction or mental health issues. Another element of the plan is its aim to take a well-rounded approach to combating mental health issues. As her Medium post explained, this will include work to remove the stigma that surrounds mental health, suicide prevention programs that focus on minority communities and veterans, and funding for research at the National Institutes of Health.

"Everywhere I've gone in this country, every town hall meeting, people say, 'What's the most interesting thing that you've heard?'" Klobuchar told NBC News' Ali Vitali in an interview. "Almost every single one, people either ask about addiction or they ask about mental health."

While Klobuchar told CBS This Morning that her family's personal history with alcoholism was one of the drivers of the plan, another is the sheer breadth of the problem. Drug overdoses killed more Americans in 2017 than the entire Vietnam War did, as she told CBS. Addressing the problem from the bottom up — that is, with prevention efforts — is thus an important prong of the proposal.

The plan still leaves some areas to be further specified, as Politico wrote, and a number of its elements have already proven to be unpopular in Washington. For example, levying an additional tax on pharmaceutical companies is unlikely to be popular with Republican lawmakers — and from the other side, such a tax could also end up merely costing consumers more, according to Politico. Still, this is the most comprehensive program than any 2020 Democratic candidate has introduced that would address addiction and mental health issues so far.