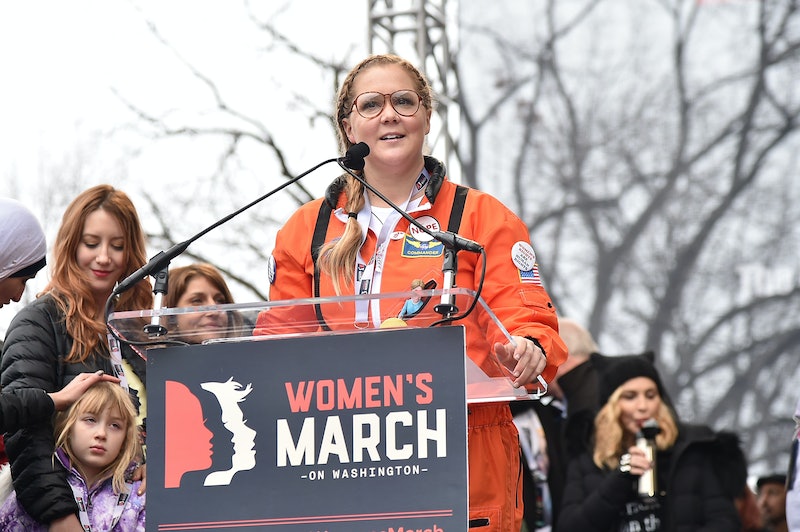 While many of us were fast asleep or just rolling out of bed, the President of the United States was up and tweeting. What about, you may ask? One of the funniest women in showbiz has you covered with that answer. Amy Schumer took to Instagram to blast Donald Trump, who mocked Democratic Senate Minority Leader Chuck Schumer and House Minority Leader Nancy Pelosi at 6:21 in the morning on Tuesday. Trump said Chuck shed "fake tears" during a press conference on Monday where the Senate Minority Leader condemned the president's executive order to temporarily ban immigrants and refugees from seven countries from entering the U.S. He also couldn't help but jab Pelosi whose microphone suffered a technical glitch.

Comedy Central star and distant cousin of Chuck, Amy took a screenshot of the 45th president's low blow, posted it to Instagram, and defended her relative, writing, "Also I know chuck Schumer and HE CANNOT act trust me. He can barely smile on cue. He can't help but be transparent and genuine." She also decided to go high with an impassioned yet simple call-to-action caption for her 5.7 million followers — "wake up."

"We need people alert and fighting for each other's rights," she wrote in her caption. "Tell your sheltered friends to wake up and help."

The Inside Amy Schumer actor's caption noted not only how outrageous it was that Trump opted to proceed making fun of Chuck and Pelosi (at such an early hour), but also explicitly stated that Americans cannot continue to remain complacent. She wrote,

"Trump is about to bombard us with so many awful decisions. His Supreme Court pick will be terrifying and he will try and stop same sex adoption and all our other nightmares. We can't get burnt out or overwhelmed and distracted. We need to stay focused and organized. Tell your friends who say "I'm just not political" that that doesn't cut it anymore."

After lambasting Trump's ban as "so unconstitutional and cruel," Schumer dropped several gems about the importance of unity. "We need to fight this now and together," she wrote. "Call congress. Call the senate. We need to wake up and rise up together. People need our help."

Ahhh, I love the smell of activism in the morning. Don't you? Props to Amy Schumer for using her platform of the greater good. Since her post garnered more than 65-thousand likes on Instagram, Schumer showed her social media skills are anything but a Trainwreck.

More like this
Amanda Gorman Shared A Powerful Message On Meghan Markle’s Penultimate Podcast
By Darshita Goyal
Matt Hancock Broke a Major Rule With I’m A Celeb
By El Hunt
Claire Foy & Rooney Mara Revisit A Devastating Tale In 'Women Talking'
By Bustle UK
You Definitely Know The Voice Of Shuri's AI In 'Black Panther: Wakanda Forever'
By Brad Witter
Get Even More From Bustle — Sign Up For The Newsletter