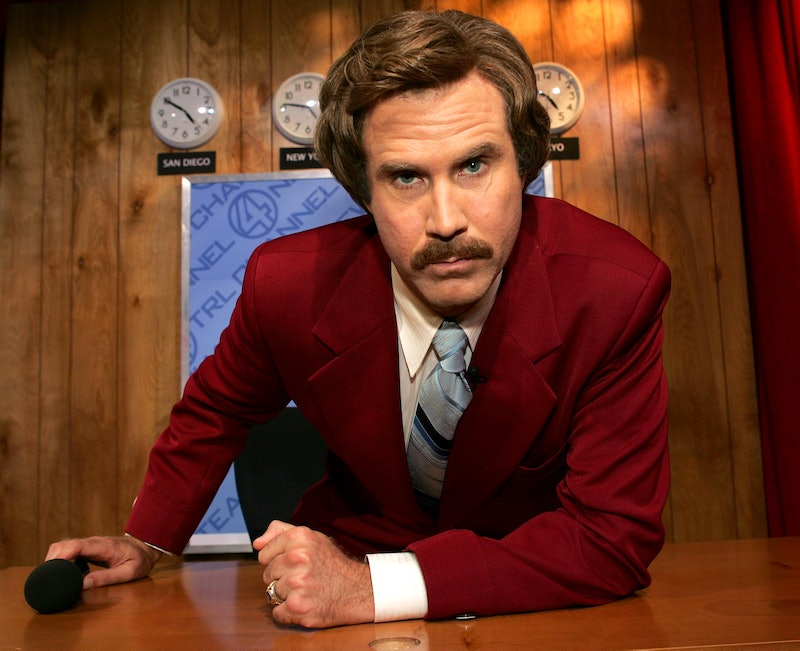 Get ready to feel like you're in a glass case of emotion because Anchorman's very own legendary Channel 4 news anchor Ron Burgundy is launching a podcast for the iHeartRadio Podcast Network in 2019, and by the beard of Zeus it sounds absolutely amazing. The news was initially announced on Burgundy's official podcast Twitter account during a hilarious exchange between Will Ferrell's iconic character and CNN’s Don Lemon. "Have you heard of 'podcasts?' Burgundy tweeted to Lemon. "They’re hotter than Jane Fonda’s workout tape! Anywho, I need help getting the word out about mine. What do you say best friend?"

Unfortunately, Lemon did not seem to share Burgundy's enthusiasm over the news, tweeting back at him not to create a podcast and to stop contacting him. As one might expect, this did not sit well with the former San Diego anchorman and resulted in a very heated (and extremely comical) exchange between the two men, mostly on Burgundy's end. "Okay, so no podcast plug. Got it," Burgundy retorted to Lemon shortly thereafter. "By the way just so you know, our friendship is over. YOU GO STRAIGHT TO HELL. DO NOT DISRESPECT ME IN A PUBLIC FORUM. DON IS A GRADE A JERK. BURGUNDY, OUT." Wow, that escalated quickly.

The announcement also came accompanied with an official press release, as reported by Entertainment Weekly. “Listen, I don’t know what a podcast is, but I currently have a lot of time on my hands and a lot to talk about,” the fictional character said in the statement. “I am also broke. Therefore, I am very excited to do this podcast. It is literally saving my life.”

iHeartRadio and Funny or Die will co-produce the project, which has already been picked up for two seasons that will consist of 12 episodes each. iHeartPodcast Network President Conal Byrne also commented on the partnership in the same statement, claiming, “Ron quite literally forced us into making this podcast with him, first calling us more than one hundred times in a single day and then proceeding to actually show up at our doorstep and physically force himself into our studios.”

Burgundy, however, made a point of refuting that sentiment immediately:

“By the way, if iHeartRadio says that I harassed them into making a podcast, it is a lie!! A boldface lie!! Did I call them one hundred times in one day? Yes! But that’s called persistence! I have filed suit against iHeartRadio for these salacious claims. I will be representing myself legally, since I currently do not have enough money to hire an attorney.”

But, to be honest, who wouldn't want to work with him? He's kind of a big deal.

Considering that Burgundy was a top notch news anchor back in the '70s, turning to the digital world does seem to be the most logical next time. (The best reporters need to keep up with these modern times, after all. Unless this podcast is supposed to take place in the past???) But why should he stop there? He could start his own vlog or create an official YouTube channel where he can teach others how to make their apartment smell like rich mahogany or something. And, of course, just imagine what kind of masterpieces his Instagram stories would be. The mind reels at the possibilities.

Either way, it's good to have Mr. Burgundy back in our lives once more. Let's just hope that it won't involve him having to read from a teleprompter ever again. Last time that didn't go so well.