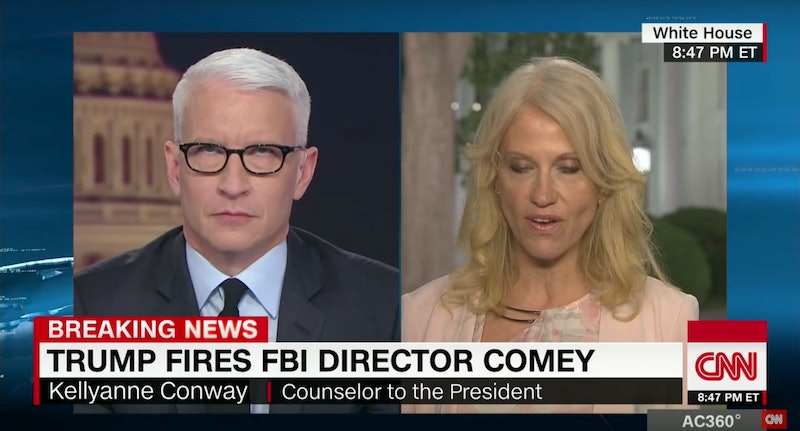 Watch out, Kellyanne Conway. Just because you're allowed back on TV defending your boss' policies, it does not mean you're out of the line of fire — at least not on CNN. Tuesday night, the polling and campaign guru-turned-presidential adviser was on cable news defending President Trump's move to fire FBI Director James Comey.

But Anderson Cooper would have none of it: Cooper rolled his eyes at Conway, and it's the only redeeming bit to come from this whole mess.

You must surely have read by now that Trump fired Comey on Tuesday after receiving recommendations from Attorney General Jeff Sessions and Deputy Attorney General Rod Rosenstein to do so. Most of it was ironically framed on Comey's handling of the Hillary Clinton email probe, which likely helped get Trump elected. Trump then emailed the FBI and had his bodyguard hand deliver a letter. Comey himself reportedly found out about the firing from cable news.

This caused a huge controversy and left the White House scrambling for answers, given that Comey's agency is in charge of the investigation into any possible collusion between the Trump campaign and high-ranking Russian officials. In order to keep the 24-hour news channels satisfied, the White House unleashed some of its most prolific surrogates, hence the interview with Conway. Her answers were just not good enough for Cooper.

The eye roll is the highlight and it came after Cooper rolled footage of Trump praising Comey for reopening the probe into Clinton's emails from the campaign trail time and time again. "As a candidate, Donald Trump praised James Comey," Cooper said on the show. "Donald Trump talked about this on the campaign all the time. All of sudden the White House is concerned about James Comey's handling of Hillary Clinton's email?"

Conway's response was a classic one, completely ignoring the main issue. The two went back and forth as Conway tried to explain that Trump as a candidate is entirely different from Trump as president, and that now he has "lost confidence in the FBI director."

Cooper countered her claim with a pretty important question: "Candidate Donald Trump, that's a fictional character we are no longer allowed to refer to? We can only refer to the Donald Trump who exists today?"

The interview — which would be painful to watch were it not for Cooper's many confounded reactions — sees Conway spin in every direction possible to deflect the clearly bad timing of the firing. She's not even willing to say that there's a Russia investigation underway. "I know that some are obsessed with the word Russia, Russia, Russia," Conway said. "I'm around the president. I'm not under investigation."

No one should enjoy the way that the administration tries to abuse, berate, and lie to the media. But Twitter did go wild for Cooper's eye rolls. It's nice to know that at least when it's clear members of the news media are trying to do their jobs well, the public is still on their side. Cooper's eye roll speaks for me, and I'm guessing for you too.

More like this
A Political Thriller Inspired By The Munich Massacre Is Coming Soon
By Darshita Goyal
Which Cast Member of 'Westworld' Season 4 Has the Highest Net Worth?
By Meg Walters
Emma Mackey *Is* Emily Brontë In The First Trailer Of The Biopic
By L'Oréal Blackett and Sam Ramsden
'The Capture' Is Finally Back – & S2 Looks Tense AF
By Sophie McEvoy and El Hunt
Get Even More From Bustle — Sign Up For The Newsletter