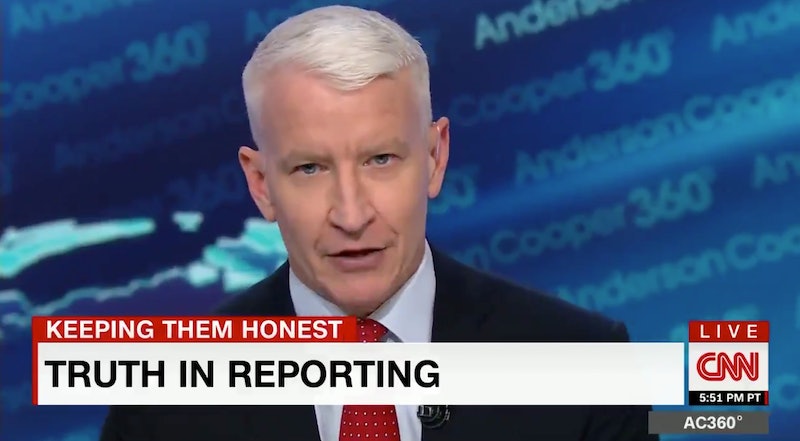 The president's oldest went after a CNN anchor this week, and the anchor pushed back. On his Monday night show, Andersoon Cooper said Donald Trump Jr.'s Hurricane Florence tweet was an example of "tweeting lies" — and that it's something the president's son does rather than help people suffering in natural disasters. "I'm not sure he's ever been to a hurricane or a flood," Cooper said.

Bustle reached out to the Trump Organization for comment.

Before responding to Trump Jr. on Anderson Cooper 360º, Cooper detailed what happened. The president's son "Donny Jr.," as Cooper called him, tweeted out a picture of the news anchor standing in floodwater while his camera crew remained on higher ground.The implied message, Cooper said, was that he and CNN exaggerated the severity of Hurricane Florence — even though the picture is from years ago. The picture was shared widely online.

Cooper said Trump Jr. wrote a message that bought in to the conspiracy theory. "It’s a shame that CNN’s ratings are down 41%. What’s worse is there’s a simple solution that they refuse to accept. Stop Lying to try to make @realDonaldTrump look bad," Trump Jr. wrote.

Another Trump-connected Twitter user Gavin Smith also tweeted the photo. "Absolutely disgraceful! Apparently #HurricaneFlorence wasn’t devastating enough for @CNN’s @andersoncooper — so he had to exaggerate for his live shot. #FakeNews at its finest!"

Cooper responded forcefully on his show, saying, "I’ve covered hurricanes for about 14 years and it really does make me sad to think that anyone would believe that I would try to fake something or overly dramatize a disaster."

Cooper spoke with a bit of an attitude in his response. He said that some of the jokes directed at him were homophobic, including one about kneeling.

His response to Trump Jr. didn't hold anything back:

I know he considers himself an outdoorsman and pays a lot of money to be led to wildlife in Africa that he then kills. But I’m not sure if he’s ever actually been to a hurricane or a flood. I didn’t see him down in North Carolina the last few days helping out, lending a hand, but I’m sure he was busy doing something important besides just tweeting lies.

Trump Jr. responded on Twitter Tuesday morning in three tweets. "If you’re going to spend 10 minutes crying about a meme you may want to make sure you’re actually right. Good article as it shows exactly what CNN does daily to sell false truth," Trump Jr. wrote.

He retweeted a post by Ryan Saavedra, who works for conservative opinion site The Daily Wire. That linked to an article that makes the argument that Trump Jr. never explicitly said the photo was from Hurricane Florence.

In the second tweet, Trump Jr. brought up past stories where the validity of the reporting has been challenged. Bustle reached out to CNN for comment.

In the third tweet, Trump Jr. repeated the argument made in the story he linked to in the first tweet. "Not surprised @AC360 lied about me on @CNN last night. Par for the course. I never said the pic of him was from Florence," Trump Jr. wrote. "When I tweeted out the picture of @AC360 it was with a link to an article about CNN's dwindling ratings. Nothing to do with Florence."

In the rest of the segment on Monday night, Cooper explored his coverage of hurricanes to show just how serious Hurricane Florence was "in the interest of honesty and transparency."

Cooper said that where he was standing in the photo from Trump Jr.'s initial tweet was in Texas in 2008 during Hurricane Ike. "You can argue I didn’t need to be standing in waist-deep water," Cooper said. "I could have been standing on the road by the camera crew. But, again, I didn’t want to be roaming around on the highway interfering with rescue vehicles in any way. I also wanted to show people how deep the water was and how dangerous it is for anyone driving."

Cooper also said that he doesn't expect the president's son, or his followers, to change their mind. But he made the argument anyway.

"Look, I don’t expect the president’s son to ever admit that he was wrong or one of the president’s advisers or frankly anyone else who’s retweeted any of these pictures," Cooper said. "But I at least thought that they and you should know the truth."

More like this
Twitter Is Very Torn About The Winner Of 'Dancing With The Stars' Season 31
By Jake Viswanath
The 10 Memes That Defined 2022
By Alexis Morillo
This AI Filter Shows How You’d Look In Different Time Periods
By Alexis Morillo
Everything You Need To Know About Dabloons, TikTok’s New Currency
By Catharina Cheung
Get Even More From Bustle — Sign Up For The Newsletter