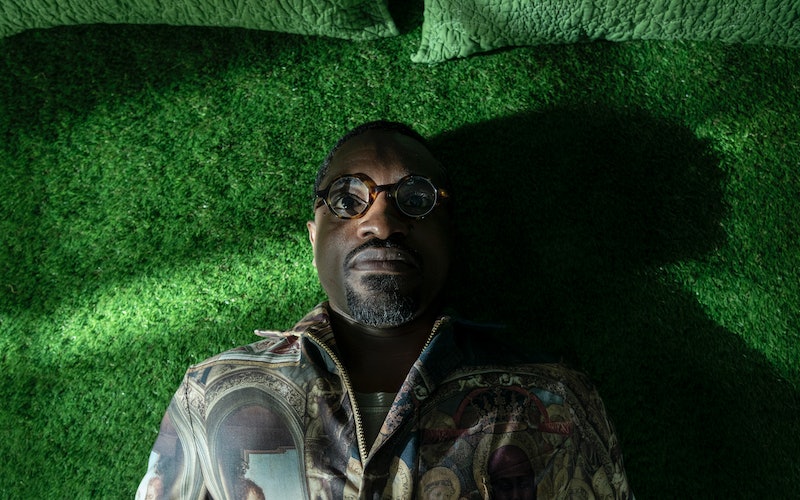 André Benjamin may be best known by his stage name, André 3000, but the Atlanta rapper has also acted in several projects, including American Crime, the 2018 Robert Pattinson vehicle High Life, and Semi-Pro, among others. In his latest acting project, André 3000 plays Fredwynn on Dispatches From Elsewhere — AMC's trippy new drama, starring and executive produced by Jason Segel.

The series, which premieres Sunday, March 1, follows four characters played by Benjamin, Segel, Sally Field, and trans actor Eve Lindley, who become embroiled in an obtuse game created by the Jejune Institute. Per Vice, this was a real life organization, which recruited "players" to find a missing teenager named Eva.

Jejune concluded with a final chapter in 2011 but was succeeded by the Elsewhere Philatelic Society in San Francisco, according to the article. "They're former participants who went on to create their own series of experiences, with new plots and new characters," Jejune founder Jeff Hull told Vice.

Clearly, these events inspired the Dispatches from Elsewhere plot, in which Fredwynn, Janice (Field), Simone (Lindley), and Peter (Segel) are recruited by Octavio (Richard E. Grant) as "agents of nonchalance," instructed to find someone named Clara. While his cohorts are convinced it's fake, Fredwynn believes the Jejune Institute is an "international conspiracy," as he says in the trailer.

"[Fredwynn] is our conspiracy theorist," Benjamin confirms in a promotional video. And while he said that his character "is taking the game too seriously...at the same time, he's not." Indeed, Fredwynn seems to be the galaxy brain meme personified.

Segel added to his costar's sentiments, explaining that Benjamin's character "represents the part of us that is blind ambition and winning at all costs and the idea that, 'If I accomplish X, Y, Z, I'm going to feel a certain way.' Only to find that this path lasts forever."

Like much of the series, which appears purposefully complex, Fredwynn is both fascinated by and suspicious of the Jejune Institute. "He has to figure it out — whatever it is, and he's just a stickler for getting to the bottom of things, no matter what it is," Benjamin said.

So whatever the Jejune Institute really is or who Clara ends up being, Fredwynn and his Harry Potter glasses are on the case.