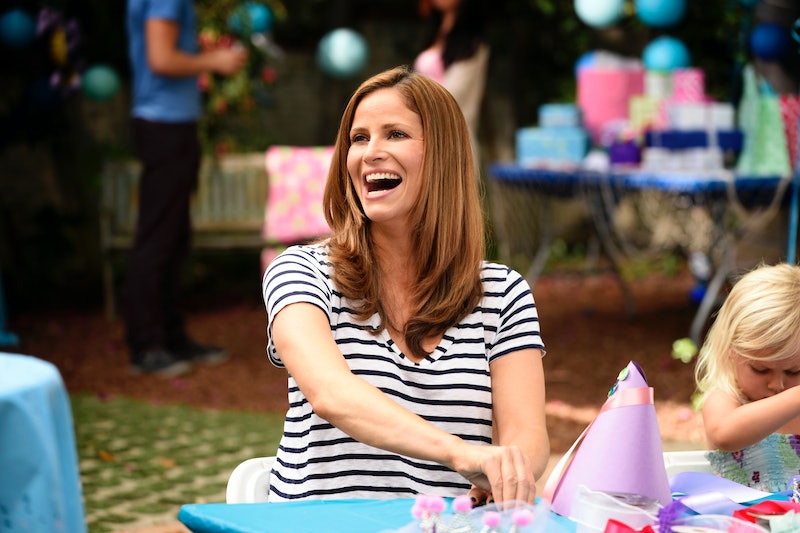 Andrea Savage may say "I'm sorry" a lot, but that doesn't mean she's apologizing for anything. As she tells me over the phone on a Thursday evening in June, when I ask about the inspiration behind the title for her new show on truTV I'm Sorry, "I was trying to take back the phrase, because there were all these headlines about women apologizing too much. The thing is, everyone apologizes all the time!" The veteran comic is on a mission to investigate the many iterations of the polarizing saying. "The thing is, there’s a lot of different ways you can say it," she says. "It can be like, 'I'm sorry, that's insane.' Or 'Sorry, not sorry.'"

The show follows a heightened version of Savage as she tackles situations often taken straight from her autobiography. She negotiates a myriad of life milestones and awkward situations. Sometimes, she's figuring out how to parent (Andrea has a daughter IRL). Sometimes, as we see her in everyday settings where her good intentions backfire and she's expected to apologize, she makes us laugh the whole way. "Let's just say it's not hard to get into character," she says. "I’m playing a version of myself and all the stories on the show are based on my real life, and all the characters in the show are based on people in my real life."

Whether she's negotiating the social politics of school co-parents, or trying to teach her daughter how to talk about the world, Andrea is always trying to do the right thing. But often as these things go IRL, things blow up hilariously and awkwardly in her face. Just one example from the pilot: When she tries to turn on the AC in a sweltering dance studio, Andrea's confronted very aggressively by one of the other women in her dance class — played by the legendary Judith Light. Mincing no words, the woman tells Andrea to "f--k yourself," and somehow Andrea ends up being the one comes off as the instigator.

"That really happened to me, but nobody saw it because everyone was mid-cha-cha." When she recalled the scene of shooting that day, it was really when the experience of writing and creating the show fully came to life. She used her actual dance studio and cast her actual dance class peers. "I tried to bring in as many real elements as possible." She casts real people she knows, her friends, dance class partners, and she wears her real clothes.

As for creating and starring in her own show, Savage has nothing to apologize for. With a nearly 20-year career in comedy, she's more than put in the hard yards. "[Filming the show] was such an intense experience, and there were so many powerful and surreal moments," she says. "Especially because the stories are based on your real life, and to have those stories reenacted in front of you? The experience blurred a lot of the lines. It was just so cool!"

Savage is no newbie to the entertainment industry, and is the friend and collaborator of many a huge name in comedy. Some of her credits include Laura Montez on Veep, the hyper-European Ivanka on Hotwives of Las Vegas, and Gail on The League. In I'm Sorry, Savage cast well-known hilarious friends like Judy Greer, Jason Mantzoukas, and Nick Kroll. Adam McKay and Will Ferrell are producers, as are Andy Samberg, Jorma Taccone, and Akiva Schaffer of The Lonely Island. And while having your own show after a decades-long career in comedy is never a guarantee, the show is seriously well-deserved for Savage.

What's more, the show isn't just authentic; it's relatable. When I called out just how much I identified with that "I'm sorry... now I'm the bad guy?" feeling, she lit up. "Yes! I’m always trying to do the right thing. I have a very optimistic point of view in life. I think, 'Why can't everyone be honest and say how they feel?' If that’s the case, then everyone can sort of work it out.”

When I ask her what makes her laugh the hardest, she doesn't hesitate. "I have some really, really funny friends." And being in comedy, doing that is just another day at the office. "When we get together, I laugh until my face hurts. It’s just as fun as you think it would be."

This article is sponsored by truTV's I'm Sorry, premiering on July 12 at 10/9c.