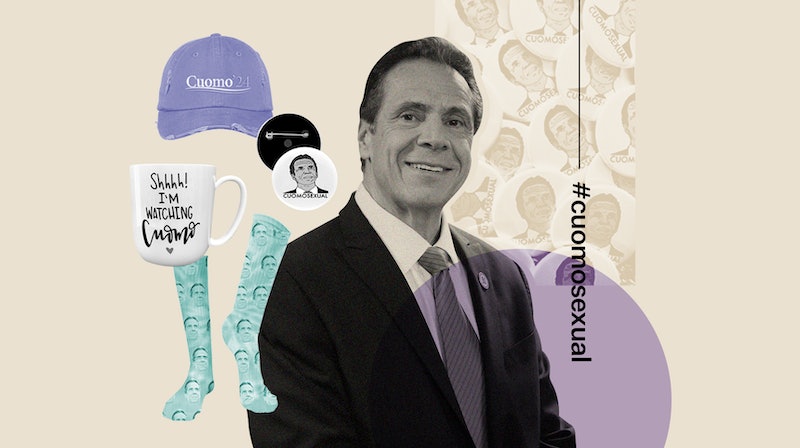 A few weeks ago, Callie Myers, a calligrapher and event designer in Macon, Georgia, left a coffee mug on her friend’s porch as a gift. The cup, which reads “Shhhh! I’m Watching Cuomo,” was an inside joke about their love for live chatting during New York Governor Andrew Cuomo’s daily press briefings.

“When I saw how much she loved it, I realized we couldn’t be the only ones who were embracing Cuomo’s leadership,” she tells Bustle.

Myers decided to list it on Etsy for $14.99, and business has been booming ever since. In one week, she sold 50-100 mugs, fielding orders from several states including California, Kentucky, Washington, Pennsylvania, and Florida.

The geographical range of her customer base suggests the Democratic governor is resonating with people beyond the New York state border. “He isn’t just leading New York,” Myers says. “His strength and empathy have resonated in a time where people are looking for someone they can trust.”

For many Americans under ongoing stay-at-home orders, the New York governor’s daily press conferences have become must-see TV. Millions have tuned in for his updates on the coronavirus pandemic, which has claimed the lives of more than 25,000 New Yorkers and 70,000 nationwide as of May 6. Cuomo’s appearances — science- and data-driven, and punctuated with personal anecdotes, inspirational words about being “New York Tough,” and concern for his brother, CNN anchor Chris Cuomo, who himself battled the virus — have been for many an unexpected balm in a time of uncertainty. The governor’s visibility on the national stage has also led to an influx of Cuomo-related merchandise online; a quick search of “Cuomo” in the Etsy search bar yields more than 3,500 items, from T-shirts branded with “Cuomosexual” to socks emblazoned with the governor’s face.

Jacob Meyer, a full-time college student in Jacksonville, Florida, is one of the makers behind the sudden burst of Cuomo merch on Etsy. He designed a $22.99 baseball cap with “Cuomo ’24” stitched on the front. Unsurprisingly, it’s very popular: He’s sold 221 hats, bringing in more than $5,000.

“When Governor Cuomo started doing the daily press conferences, my family and I were captivated by how well he addressed the state of New York,” Meyer says. “Because of how presidential he seemed, we [wanted to] create a political campaign parody design. We decided to put them on Etsy because of how the nation was really taking an interest in the governor.”

Cuomo, who was elected to his third term as governor in 2018, didn’t always enjoy this level of public favor. Some within his own party have viewed him as not progressive enough, a critique Cuomo has previously pushed back against. He’s also been perceived as a bully who stops at nothing to get his way.

These days, as the governor’s fans flock to Etsy for Cuomo paraphernalia, some critics are calling him out for an initially slow response to the pandemic. Both Cuomo and New York City Mayor Bill de Blasio have been criticized for not implementing stay-at-home orders sooner. Some have implied the longstanding feud between the two politicians made the situation in New York worse, and that the back-and-forth posturing between Cuomo, de Blasio, and Donald Trump — in the middle of a global pandemic — is nothing more than a giant pissing contest with American lives and livelihoods hanging in the balance.

Others have critiqued the public swooning over Cuomo’s leadership, but that hasn’t stopped enthusiasts from supporting the governor or purchasing his merch. As for the designers, they acknowledge Cuomo isn’t perfect but is doing the best he can given the circumstances.

“It’s important to hold our elected officials to a high standard, but they do all make mistakes,” says New York-based marketing exec Derek Jech, the creator of the popular $10 “Cuomosexual” button. “Ultimately, he acted how he thought appropriate, and in doing so has gained new fans and supporters.”

Those supporters include Jech’s friend group, who he says slightly pressured him into using his button-making skills for the governor.

“My friends know I have an Esty shop that sells pins of my favorite politicians and started teasing me: ‘Make a pin! Make a pin for Cuomo!’” he says.

Living in the epicenter of the coronavirus outbreak in the U.S., Jech’s friends in New York and New Jersey have found solace in Cuomo’s daily briefings. “No matter how awful the news, he had a way of delivering it that calmed us,” he adds.

Like the other sellers, the response to Jech’s button caught him off guard. He estimates he’s sold 100-125 pins to date.

“Most shocking is that people from all over the country, nearly 20 states, have bought the buttons,” he says. “All the profit goes to charity, so it’s an easy way for people to support NYC and get a little something in return.”

Sales from Jech’s white “Cuomosexual” button are going to a nonprofit that delivers meals to people with serious illnesses who are unable to cook for themselves and are especially susceptible to COVID-19. He also recently began selling a pink “Cuomosexual” button, whose profits will be donated to an LGBTQ+ homeless youth organization that provides housing and resources.

“The city I love so much had been grounded to a halt, and I felt like I wasn’t doing enough to help,” Jech says. “As long as people still want to profess their love for Cuomo, I’ll be ready to create.”

We are shining a spotlight on some of the millions of small businesses now challenged by COVID-19. This is part of an ongoing commitment our parent company, Bustle Digital Group, is making to support small businesses throughout the entire month of May. Tell us about your favorite small business on social media using #SmallBusinessSalutes.

More like this
15% Pledge Director LaToya Williams-Belfort On The Impact Of Supporting Black Business
By Dominique Norman
Harry Styles’ Red Carpet Looks Have One Thing In Common
By El Hunt
Genius T.J.Maxx Shopping Hacks For Sales On (Almost) Everything
By Kelsey Stiegman
10 Corsets That *Actually* Work For Big Boobs
By Bella Gerard
Get Even More From Bustle — Sign Up For The Newsletter