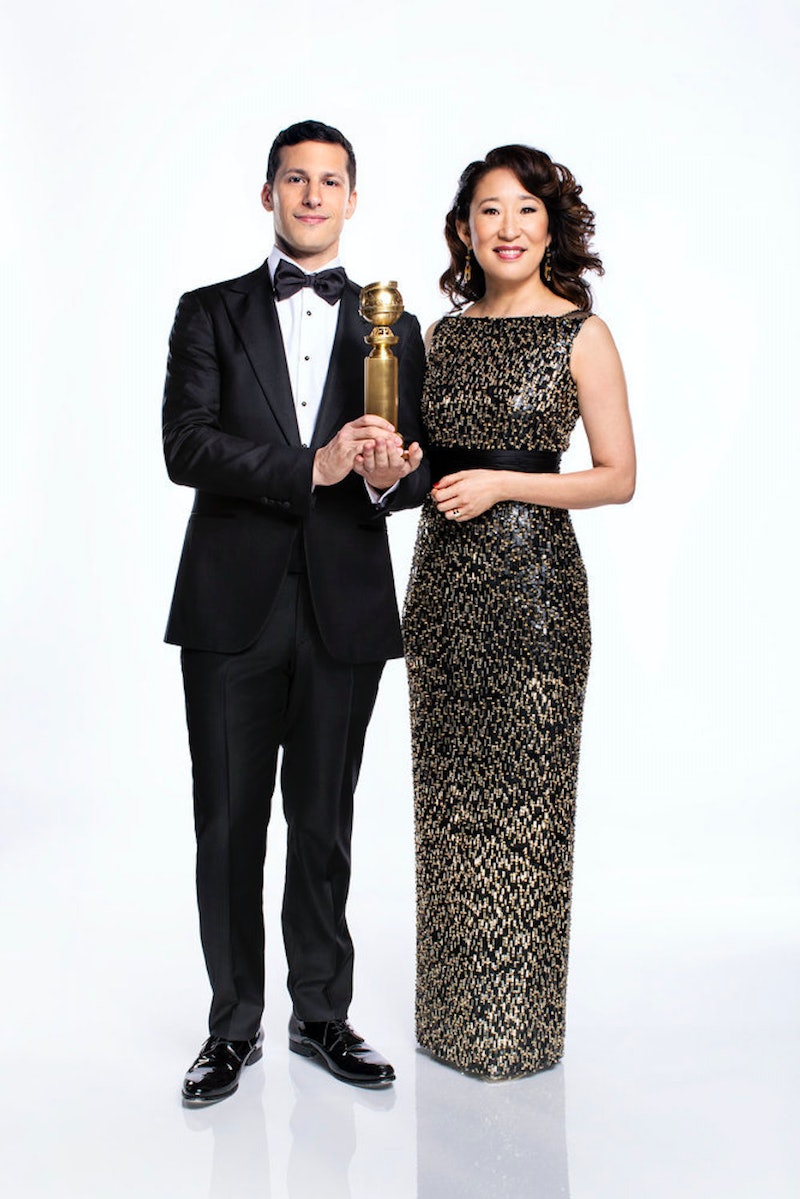 The Oscars still don't have a host after the Kevin Hart debacle, but the Golden Globes, which air this Sunday, Jan. 6, have two of the best: Andy Samberg and Sandra Oh. Though they haven't worked together before, the two have great chemistry that came through in a new interview with the Hollywood Reporter in which they talked about their upcoming show. In the interview, it was revealed that Samberg and Oh won't be talking politics at the Golden Globes, because frankly, people just can't handle it right now.

Samberg and Oh barely had a week to prepare to host the 2019 Golden Globes together, but it seems that they were able to get along pretty quickly. In fact, they both agreed that they wanted to stay away from politics on the big night because, as Samberg put it, everyone is just really depressed right now. "Not to ignore anything, but we spend so much time every day wallowing in a lot of things that are happening in our world that are really depressing," Samberg said, "And with good reason — that stuff needs to be paid attention to — but there's also power to being positive and celebratory in the tougher times as well."

Oh, whose first hosting gig ever is this Sunday's Globes, added that even though they don't have any plans to discuss politics on the Golden Globes stage, that doesn't mean nobody will. And that's something Oh is completely embracing. "And the job of being a host, it's really to be there to support all the nominees and those who take that platform to say whatever they want," Oh said. "I don't really think that [getting political] is for the hosts necessarily. You make it an open and safe place for whoever wants to use that platform to speak."

Oh went on to say that she wants to focus on positive change in the industry and not even go near Trump at all. "I want to focus on [real change] 'cause people can pooh-pooh Hollywood all they want — and there is a lot to pooh-pooh, sure — but we also make culture," she said. "How many gazillions of people have seen Black Panther and Crazy Rich Asians? That changes things," she added.

Samberg has had plenty of experience hosting awards shows; he's hosted the MTV Movie Awards, the Independent Spirit Awards, and, his biggest gig of all, the Emmys. He's never co-hosted though, and he's excited about sharing the stage with Oh. "I like playing off someone else and having a looseness to it," he said. It's not surprising to hear that Samberg enjoys performing with others, since he comes from his longtime comedy trio the Lonely Island and became a household name on Saturday Night Live.

Samberg is a great host, something that really came through when he hosted the Emmys in 2015. He is currently filming the sixth season of Brooklyn Nine Nine, which airs on NBC on January 10. Brooklyn Nine NIne was cancelled by Fox and picked up almost immediately by NBC after an overwhelming fan response. Samberg won a Golden Globe in 2014 for his work on the show. Meanwhile, Oh just finished filming Season 2 of her hit show Killing Eve, for which she nominated for a Globe this year. She also made history when she was nominated last summer for a lead actress Emmy for her role in Killing Eve, becoming the first Asian-American in history to be nominated in that category.

With resumés like that, it's obvious that these Golden Globes will be a night fans won't want to miss, whether politics are involved or not.