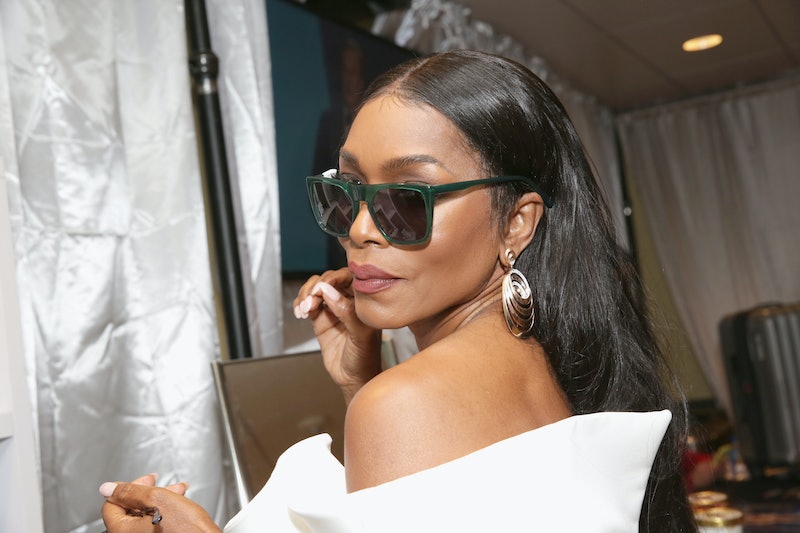 It's been a long week, and it's only Tuesday. So for anyone who needs an extra dose of zen to get them to Friday, Angela Bassett's reaction to being called Omarosa Manigault Newman is exactly what you need. In a caption for a photo from the Emmy Awards, The New York Times mistook Bassett, an award-winning actress, for Manigault Newman, who is currently promoting her memoir chronicling the time she spent in the White House. Despite the fact that Manigault Newman wasn't even at the Emmys, her name still managed to make the paper.

On Tuesday morning, The New York Times ran a photo of Rachel Brosnahan receiving an Emmy Award from 60-year-old Bassett along with comedian Tiffany Haddish. In the caption, though, Bassett wasn't listed. Instead, Manigault Newman was named as the Emmy presenter. The New York Times quickly issued a correction, blaming the confusion on "an incorrect caption from a photo wire service."

Twitter users immediately pointed out the mistake — but Bassett wasn't interested in lashing out. Instead, she opted to give the most chill response imaginable to the situation. In a tweet with an attached gif of Olivia Pope, Bassett wrote, "Hey Everybody, no worries! xoAng"

Manigault Newman has not responded to the incident on any social media platform, as of yet.

Still, many Twitter users were not having it, including several prominent media publications. For example, HuffPost BlackVoices tweeted, "Today in 'all black people look alike,'" including a link to the story.

And Joy Villa addressed it head-on, tweeting, "Wow @nytimes do all dark skinned black women look the same to your editors?? Gorgeous and talented Queen Angela Bassett looks nothing like that other one. #NYTimes#majoreffup"

Bassett, who recently starred in the record-breaking blockbuster Black Panther, has been open about her opposition to the Trump administration in recent months. Though she hasn't talked explicitly about Manigault Newman's role as a former Trump aide, she did say that "just about anyone" would be a preferable alternative for president than Trump.

At the premier for Mission Impossible: Fallout, Bassett said in an interview, "Anyone would be a respite .. Just, damn — excuse me — just about anyone would be a relief. Unfortunate as it is to say that, it’s true.”

Bassett campaigned for Hillary Clinton in 2016, and even gave a speech on her behalf at the Democratic National Convention. Bassett was also present at Obama's inauguration.

Bassett also noted at the premiere that the country currently feels more divided than ever before. She said, “I don’t know how far we have to go — how far down, how far left, how far out — we have to go, until we come together. It certainly seemed in the past, when we have such a great mountain to climb, that is when people do come together. So perhaps it’s not far in the offing. I certainly hope so.”

More like this
Christina Aguilera Took A Powerful Stand At Brighton Pride
By Sam Ramsden
Are John Legend & Kanye West Still Friends? The Singer’s Latest Update Is Candid
By Brad Witter
Jennifer Coolidge Needs 'Legally Blonde 3' To Happen So She Stops Getting Hot Dog Jokes
By Jake Viswanath
A Political Thriller Inspired By The Munich Massacre Is Coming Soon
By Darshita Goyal
Get Even More From Bustle — Sign Up For The Newsletter