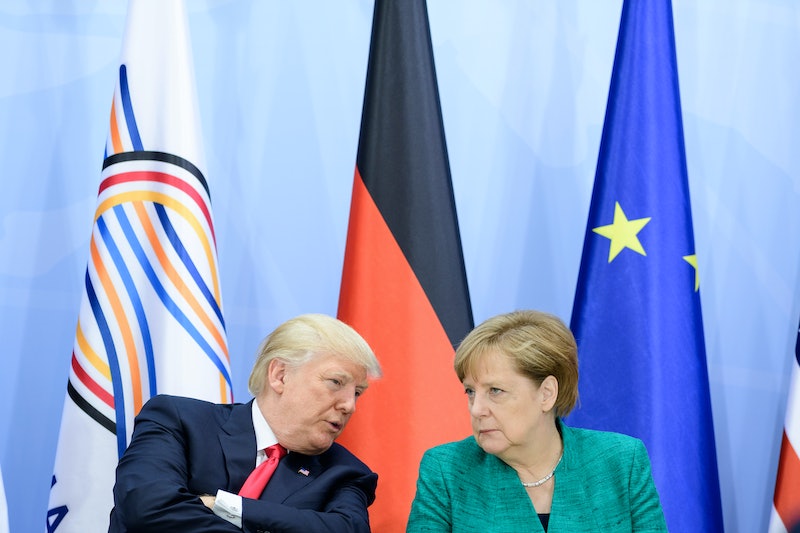 Donald Trump and the current chancellor of Germany have had a somewhat rocky relationship since Trump took office in January 2017. The duo initially met in March of that year and, as it turns out, Germany's leader apparently took lengthy measures to get ready for the meeting. Notably, Angela Merkel prepared to meet Trump for the first time by reportedly watching The Apprentice, the New Yorker revealed in a December article.

As Reuters reported at the time, Merkel and Trump first met in person on March 17, 2017. One of Merkel's national security aides told the New Yorker that she took this meeting very seriously. "[Merkel] had never prepared longer or harder for an initial meeting with a head of government than for her first meeting with President Trump," the aide told the magazine. As part of this preparation, the magazine noted that the German chancellor reportedly watched episodes of Trump's reality show, The Apprentice, and read his book, The Art of the Deal.

The New Yorker reported that, to further prepare for this meeting, Merkel read over a 1990 Playboy interview with Trump, which some people believe lends helpful insight into his psyche. The outlet noted that she also supposedly spoke with Canadian Prime Minister Justin Trudeau, who had already met with Trump in person.

The first March 2017 meeting between Trump and Merkel generally passed without incident, though the news media did report extensively on an awkward handshake incident between the two leaders. Notably, as Trump and Merkel sat in the Oval Office in front of the media, Merkel suggested that the duo shake hands — and Trump appeared to either not hear or ignore her request. At the time, Trump's former press secretary, Sean Spicer, indicated that the handshake snub wasn't intentional "I don't think he heard the question," Spicer told Der Spiegel (via an English translation).

Merkel is not the only world leader to take a somewhat unique approach in preparing to meet with Trump. As The Atlantic reported, other world leaders have also honed in on Trump's aforementioned Playboy interview to gain insight into his political philosophy. For example, the Wall Street Journal reported that Japanese Prime Minister Shinzo Abe's staff similarly studied the article ahead of his first meeting with Trump.

In this interview, Trump is asked extensively about his then-hypothetical views about how he would lead the country if he were president. Notably, Trump indicated to Playboy that one of the first things he would do if he were elected President is to tax German-made cars and Japanese goods. "I'd throw a tax on every Mercedes-Benz rolling into this country and on all Japanese products, and we'd have wonderful allies again," Trump told the magazine. The interview also lent insight into Trump's views on the military, foreign policy, and nuclear warfare, among other topics.

Ironically, Trump's Playboy interview revealed that he didn't really have an interest in pursuing the presidency at the time. "I don't want to be president. I'm one hundred percent sure," Trump said. "I'd change my mind only if I saw this country continue to go down the tubes."

Overall, it's clear that world leaders, including Merkel, are using a variety of different media to gain insight into how Trump thinks and how he leads. With a president who had a lengthy public life prior to his election, there is certainly no shortage of media material from which world leaders can select for their analyses.