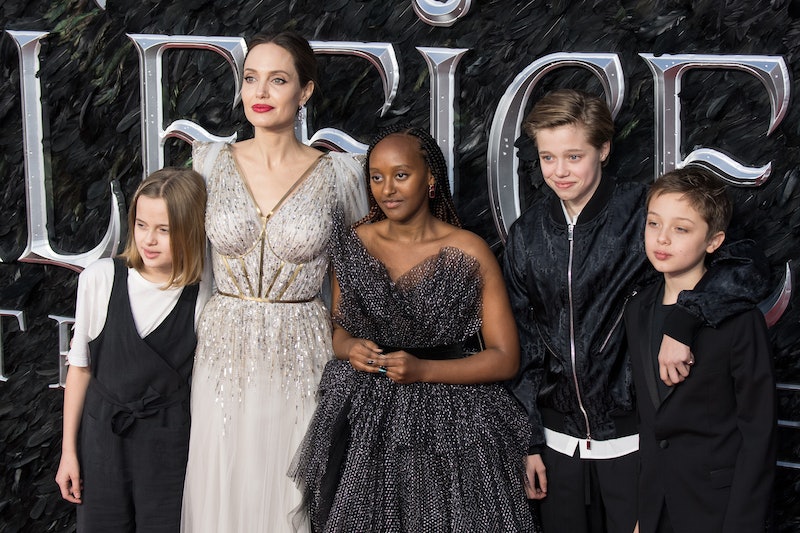 In an essay published for International Women's Day, Angelina Jolie opened up about her daughter's health struggles, revealing that two of her daughters had recently undergone surgeries. On Sunday, Jolie penned the essay for TIME about the love and respect women deserved, noting how much everyone could learn from the support the women in her family offered to each other during a trying time. Bustle reached out to a representative for Jolie, but did not receive an immediate response.

In her essay, Jolie revealed that she had been in and out of the hospital for two months for her daughter's surgeries. First with her "eldest daughter" and then with "her younger sister." She didn't name which of her children had to undergo surgery, but it seems that Zahara, her oldest, underwent surgery for an undisclosed reason, while one of her younger sisters, Shiloh or Vivienne, had "hip surgery."

The actor is typically private about her family life, but Jolie wrote that she got her daughters' permission to mention their recent health issues in her essay. "They know that I am writing this, because I respect their privacy and we discussed it together and they encouraged me to write," Jolie wrote. "They understand that going through medical challenges and fighting to survive and heal is something to be proud of."

Jolie wrote the piece from the hospital, sharing that while her sons were, "were there for them, supportive and sweet," she found herself, "focusing on my daughters for a moment, and all that I have learned from them and other young girls I have met around the world." More specifically, she focused on how her daughters dropped everything to support each other during the medical crisis, and how each was able to, "face fears with a resolute bravery."

The actor and Special Envoy of the U.N. High Commissioner for Refugees went on to note how often the notion that care "comes naturally to girls" is abused. She wrote, "The woman she grows up to be will be expected to give, and care for, and sacrifice." Jolie added that girls are conditioned to think they're only valuable "when they serve others," and taught not to "focus on their own needs and desires."

The essay urged readers to fight for a society where, "little girls’ softness, their openness and instinct to nurture and help others" is "appreciated and not abused." One critical message the star took away from the medical scares was how important it is to value and care for girls because, "the stronger they grow, the healthier they will be and the more they will give back to their family and community."

Jolie didn't reveal much else about her daughter's surgeries, or their current conditions. But, hopefully, with the care from their siblings, they'll have speedy recoveries.

More like this
Pamela Anderson Is Still A Hopeless Romantic
By Ilana Kaplan
24 History-Making Black Women You Probably Didn't Learn About In School
By Ayana Lage and JR Thorpe
25 Inspiring Quotes From Black Women To Celebrate Black History Month
By Kyli Rodriguez-Cayro and JR Thorpe
Samantha Leach's 'The Elissas': See The Cover & Read An Exclusive Excerpt
By The Editors
Get Even More From Bustle — Sign Up For The Newsletter
From hair trends to relationship advice, our daily newsletter has everything you need to sound like a person who’s on TikTok, even if you aren’t.