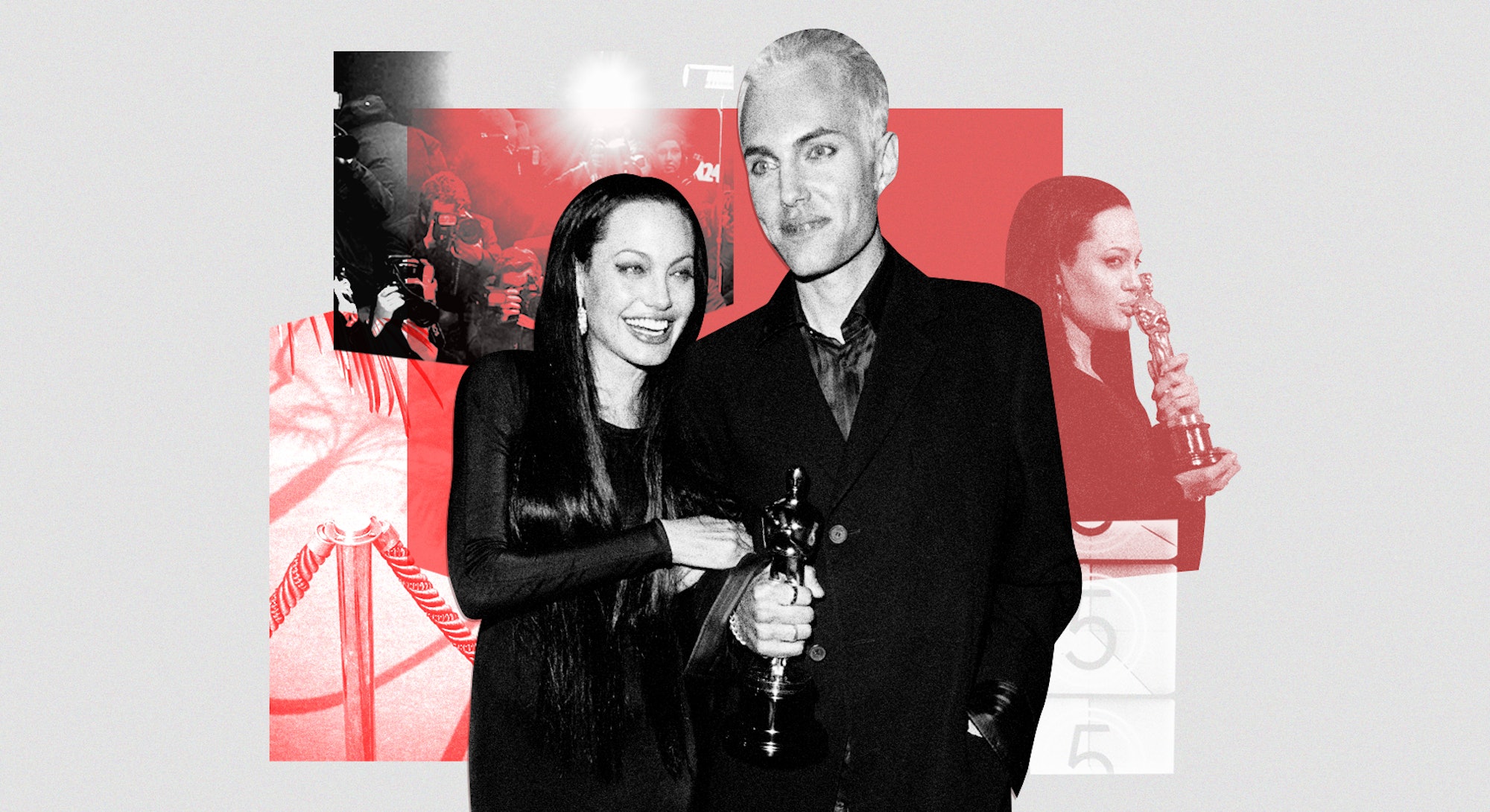 At the turn of the millennium, Angelina Jolie was a relative newcomer in Hollywood. She’d yet to star in Lara Croft: Tomb Raider, date Billy Bob Thornton, or infamously wear a vial of his blood around her neck. Though she’d already gained some critical recognition in 1998 for depicting supermodel Gia Carangi's career and tragic end in Gia, it took at least another year before she truly became a breakout star with her haunting performance in James Mangold's 1999 film Girl, Interrupted.

Playing an alluringly wicked sociopath, she was so undeniably transcendent that though the movie was meant to be a Winona Ryder vehicle, it was the 24-year-old Jolie who walked away with the Oscar nomination. Intrigue around Jolie's personal life subsequently swelled, and in the lead up to the 2000 Oscars, Esquire ran a profile in which Jolie discussed her drug use and refusal to be censored. “Angelina Jolie was known as the bad girl of Hollywood,” Elaine Lui, founder of Lainey Gossip, tells Bustle. “[She] was disruptive and she didn’t look like the girl next door; she intimidated people with her beauty. Before the expression, “no f*cks to give,” was coined, she was the epitome of it.”

Despite Jolie’s eventual triumph in the Best Supporting Actress category, it was another moment that history has remembered most vividly from that night: the on-the-lips kiss Jolie and her brother James Haven shared at the Vanity Fair Oscars party. Two decades later, we’ve decided to revisit one of the most infamous moments in Oscar history. While Jolie and Haven didn’t respond to our requests for comment, we've reconstructed the night to look back at its impact with the help of the actors, writers, and public figures who participated in and reported on the evening.

The Telecast & The Speech Heard 'Round The World

Leading up to the 2000 Oscars, Jolie had been on an awards streak. “She was just winning, winning, winning,” says Melissa Rivers, who co-hosted E!’s Live From the Red Carpet that night. “There was a lot of focus on her going into that Oscars.” On the red carpet, Tyra Banks, who co-hosted ABC’s Oscar pre-show that night, was slightly distracted. “I learned later with hosting you don’t have to yell to hear yourself through your ear piece,” she recalls of her early hosting gig. “I probably interviewed [Angelina] and was yelling and didn’t even know. In fact, I think I did interview her…. It was such a huge moment, [and] I didn’t even realize that I was there.”

When Jolie won the Oscar — beating out hopefuls like Chloë Sevigny and Toni Collette — she shocked audiences by using her speech to deliver a very pointed message to her brother.

Lui: She went up on stage and said “I’m so in love with my brother right now.” People were like, “Ah! What happened there?”

Rivers: It was a moment that people hadn’t seen at the Oscars — a blatantly sexual moment. Here are these two beautiful people who literally looked completely different than anyone in the sea of glam and beauty. [They were] glam and beauty in a completely dark, very sexual way.

Bruce Vilanch (co-writer of the 72nd Academy Awards): She was famous for being spacey (and Kevin was only famous for acting), so it seemed to blend right in with her persona of the moment. That, of course, all changed: She's a dame of the British Empire now and a mother of six. But at the time, it seemed like the kind of thing she would say.

Ed Driscoll (co-writer of the 72nd Academy Awards): It was certainly the talk in the media the next day, but we did not have any particular reaction [backstage]. We were just watching things run along. Especially after the opening [monologue], when you’re moving [the show] along, it’s more about making sure there wasn’t any insane disaster.

The Kiss That Launched A Thousand Headlines

After the awards, Jolie and Haven celebrated at the storied Vanity Fair Oscar Party. It was there that the siblings shared their widely-publicized kiss on the lips. It was covered breathlessly in tabloids like the New York Post, whose headline was, “Smoochy Jolie & Bro Too Close For Comfort.” Saturday Night Live parodied it on “Weekend Update,” with Molly Shannon playing Jolie, Chris Kattan playing Haven, and Rachel Dratch making a surprising cameo. The public became embroiled in an endless debate over whether or not the kiss constituted incest.

Jolie was forced to address the moment during a subsequent interview with Entertainment Weekly, where she argued it was nothing "more than brotherly" and that her parents "really loved that moment, and that’s what will always matter." The pair also later did a joint interview with People magazine in 2004. “It wasn’t some odd open-mouthed kiss. It was disappointing that something so beautiful and pure could be turned into a circus,” Jolie explained, with Haven adding that “it was an amazing moment. Yet it was totally misconstrued.”

Jonathan Becker (Vanity Fair staff photographer): I do remember some tension [at the party]. I think she was kissing her brother; it was all pretty wild. I probably took a picture of it. [Ed Note: He did.] I mean, they do a lot of weird things in Hollywood — it’s not a debutante ball. It was great fodder for photography, though.

Bonnie Fuller (Former Editor-in-Chief of Glamour): It was a surprising moment, so yes, lots of people were talking about it. But Angelina had a reputation as a rebellious young actress, so I think the kiss was seen in context of her being a bit of a wild child. Apparently, it was a very quick kiss — which you can't tell by looking at the photo.

Matt James (Founder of ‘00s celebrity culture blog Pop Culture Died in 2009): Because it was before Instagram, it felt seismic. Whereas now, if something happened on the red carpet, it wouldn’t blow up in the press like the kiss did.

Rachel Dratch (Saturday Night Live star): When that kiss happened, I think [the SNL writers] decided to plug my character, [a creepy baby named] Qrplt*xk, in as the love child of Angelina and her brother. I was just sort of added in as a punchline. There was a bottle of drool I took a swig of before I went out there, and it was just running out of my mouth throughout the whole segment. I remember that the audience screamed, but that character was sort of scream-inducing.

Lui: You can’t really take the kiss in a vacuum. Her sexuality was in flux. She was attracted to men and to women, so she was almost a challenger of all kinds of conventional norms and was already making people uncomfortable. Then there’s the last taboo, if you will. This accusation of incest.

Fuller: What I've read since that time about the situation is that Marcheline Bertrand, her mom, had started chemotherapy for ovarian cancer not long before the Oscars. I think that helps explain why Angelina was feeling especially close to her big brother James. They had always been close since her parents had divorced when they were young and they didn't see their father very often. I'm sure they were leaning on each other, and Angelina's Oscar [win] was a highly emotional moment for them. Why wouldn't it be?

Twenty years later, the moment lives on as part of the lore surrounding Jolie, standing in stark contrast to the mother, humanitarian, and activist she would become.

Lui: This was just part of her story. Her wildness then evolved into a sensitivity that led her to being a humanitarian. Because wouldn’t it have been boring if she stayed wild and wacky into her 30s? This is how she’s going to stay relevant into her 50s and 60s — because she keeps authentically evolving into phases of herself that still connect to her previous iterations.

Rivers: This was someone who was young and I think was also in a very different place in her life. Very soon after, she adopted Maddox [in 2002] and you see a major shift. But look, it’s 20 years later and everyone [still] remembers that moment.

James: You have two distinct Angelina Jolies: You have the wild child Angelina, who kissed her brother and would later be with Billy Bob Thornton. Then you have Saint Angie, who’s traveling the world and taking pictures with refugees. I don’t think you can have one without another. We love that character development, we love that growth. If she was always the good girl, we wouldn’t be interested in her.

These interviews have been condensed and edited for clarity.