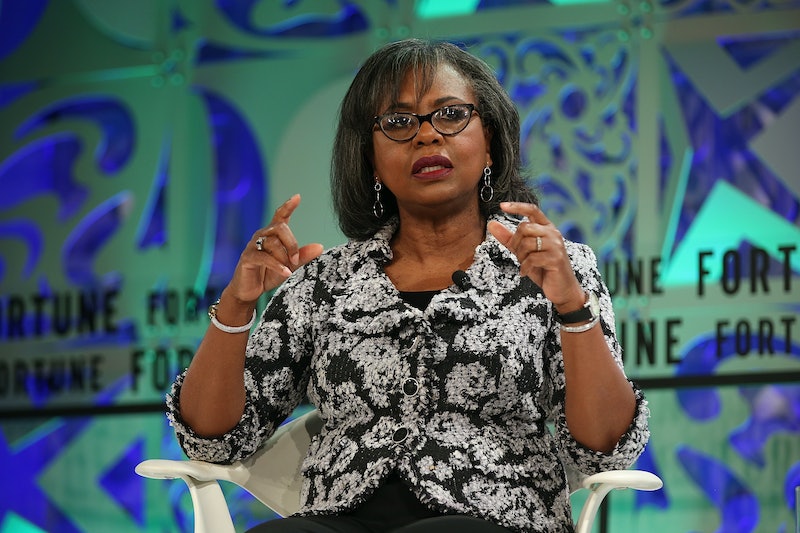 As the sexual assault allegations against Supreme Court nominee Brett Kavanaugh (all of which he has denied) continue to dominate the news cycle, one person intimately familiar with these types of situation has repeatedly shared her perspective. That person would be Anita Hill, who said she wouldn't confirm Kavanaugh, not only because of the allegations against him, but because of his demeanor during last Thursday's hearing before the Senate Judiciary Committee.

“I wouldn’t confirm him,” Hill said while speaking at the Fortune’s Most Powerful Women Summit on Tuesday, according to video of the event shared online. "I wouldn’t, because I saw a demeanor that I think was inappropriate for a judge."

Hill said that she watched most of last Thursday's hearing, where Christine Blasey Ford, the first woman to accuse Kavanaugh of sexual assault, testified and answered questions about the alleged incident. After Ford was questioned, it was Kavanaugh's turn. Hill suggested that she wasn't impressed with his behavior. During the hearing, Kavanaugh raised his voice for long periods of time, and, at least once, offered sarcastic responses to questions asked by senators.

During her remarks at the Fortune event, Hill also reflected on her own experience testifying before the committee back in 1991. "I’m the only person who has had to testify before the Senate Judiciary Committee, but I really think that a lot of people have a good sense of what it feels like,” she said.

Because any number of us have been in those situations where we either didn’t come forward because we didn’t think we’d be believed or we didn’t think it mattered. We have suffered some indignities that we didn’t care to share, but more importantly we thought that nothing would happen even if we shared it.

While she said that she watched most of the hearing, Hill said that she watched it piece by piece, some of it after the fact. "It was difficult to watch in real time because you didn’t really know what the end would be, how it would feel and look at the end of the day," she said. She continued, "We want to believe that Christine Blasey Ford can survive, that I survived. And that each of us will survive this time and any of the indignities that we have experienced.”

When Hill testified, it was because she said that then-nominee Clarence Thomas had sexually harassed her. Thomas has long-denied these accusations.

But because of her experience, Hill is in a unique position to comment on last week's hearing, as well as what it might feel like to be scrutinized after accusing a high profile judge of sexual misconduct. As such, she has been speaking about the events as they unfold.

Like many who are critical of how Kavanaugh's confirmation process has transpired, Hill also said that she believed a thorough FBI investigation was needed. "It cannot be limited," she said.

As it stands, the FBI is conducting an additional background investigation on Kavanaugh, in light of the sexual assault allegations. It remains entirely unclear what their findings will be.