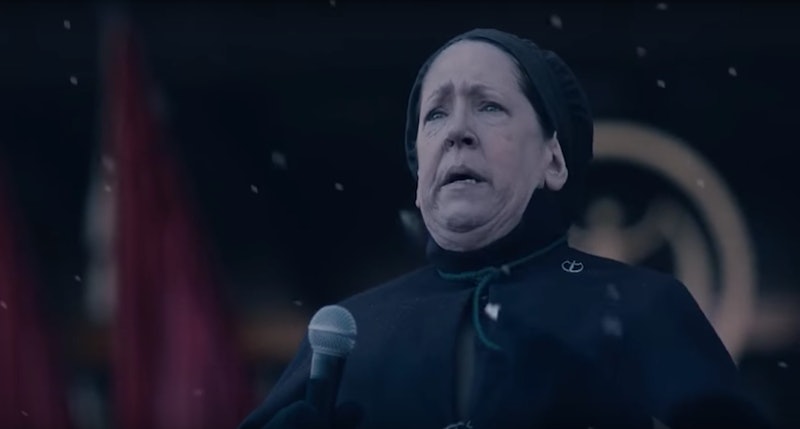 This Gilead ringleader is haunting for viewers to watch. She's brutal, evil, and flat-out horrifying. But is she really the villain? In a new interview with Vulture, Ann Dowd suggests that The Handmaid's Tale's Aunt Lydia may not be as villainous as fans think. Dowd's insight on her character, who becomes increasingly more ambiguous as the show progresses, may help fans understand her just a little bit more, and maybe even view her actions in a new light.

Aunt Lydia is often responsible for so much of the terror on the show, whether she inflicts cruel punishment on the handmaids or forces them to do so to themselves or each other. But as Dowd describes her, it's almost as if Aunt Lydia is acting out of desperation verses evil. She explains:

Her perspective is quite different, of course. She feels that the world is lost. That the gifts God gave us — the beauty of nature, the wonder of babies — that has gone away. We've destroyed the very basic things we were given. I think she feels that it's almost past repair, but not without hope. And she knows that unless she takes an extremely strong stance and approach, that the balance will not be righted.

Although Aunt Lydia's actions are also confusing and contradictory at times, Dowd's explanation makes a lot of sense. Especially to fans who recall the way Aunt Lydia was secretly weeping with happiness, when June announced she was pregnant in Season 2, on her way to ring the bell.

What remains unclear is if Aunt Lydia's loyalties lie with Gilead itself, God, or what Gilead stands for. A portion of the Handmaid's Season 2 trailer is devoted to Aunt Lydia's haunting voice reciting the following (as a handful of handmaids, including June, are seemingly about to be lynched): "You will love the Lord the God with all your heart, or you will feel the pain of His judgement, for that is His love." In Season 1, she instructed the handmaids to stone Janine to death. Their punishment for failing to do so, in Season 2, was to kneel in the rain, holding a heavy rock with a stretched-out arm, which Aunt Lydia also instructed.

But at times, Aunt Lydia shows moments of compassion and empathy, especially through her budding relationship with June, which is why it's hard to entirely hate her. Further, it makes fans question her intentions. For example, in Season 2, June confided in Aunt Lydia, revealing the Waterford house wouldn't be safe for her baby, and further asked Aunt Lydia to watch over her child should she be sent to another place. Aunt Lydia silently agreed and even revealed to June that she had been a godmother in her old life.

But does Dowd actually like her character? She explained her relationship with Aunt Lydia to Vulture, saying, "As corny as this may sound, I think it’s kind of a love story, and that's essential." She says she had to approach Aunt Lydia from a non-judgmental place and even find some common ground. "It has to be... a relationship that grows over time, and that begins without judgment. That's huge. I’ll tell you about me, you tell me about you, and let's see how we do."

And to fans who are concerned about Aunt Lydia's future: don't fret. In the shocking Season 2 finale, Ofglen stabbed Aunt Lydia's back and pushed her down the stairs, leaving her for dead. But in a recent interview with The Daily Beast, Down confirmed that Aunt Lydia survives for Season 3. "I’m allowed to say that yes she will [live]. She does survive it," she said.

Hopefully Season 3 will explore Aunt Lydia's psyche, even though she could very well be out for blood as she recovers. I'm sensing an Aunt Lydia flashback episode on the horizon. Any takers?

More like this
'Yellowjackets' Just Announced Who’s Playing Adult Van & It’s Perfect
By Gretchen Smail
At 14, D'Arcy Carden Was Sneaking Out To Parties & Crying Over Kurt Cobain
By Ivana Rihter
Josh Peck Shows Love To Jennette McCurdy After Her Shocking 'iCarly' Revelations
By Radhika Menon
Steve Martin Hints That He May Retire After 'Only Murders In The Building'
By Jake Viswanath
Get Even More From Bustle — Sign Up For The Newsletter