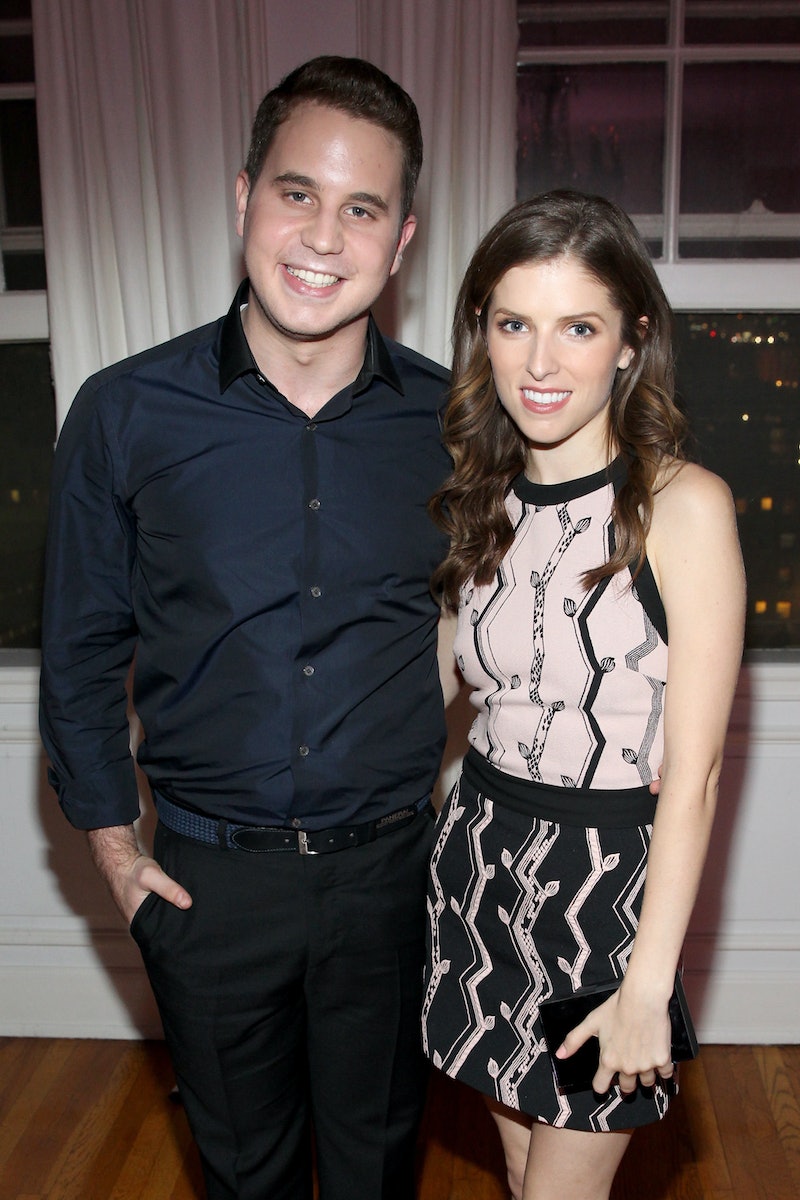 In news that will be music to Pitch Perfect fans' ears, Anna Kendrick and Ben Platt had a Pitch Perfect reunion — and it even included a tribute to the 2012 musical film. On Sunday, Sept. 29, Kendrick attended Platt’s sold-out concert at Radio City Music Hall in New York City. On Instagram the following day, she shared a selfie with her co-star and gushed about his performance. “Our baby is a superstar,” Kendrick wrote in a Sept. 30 Instagram post. “I didn’t even make it through the first song without WEEPING.”

Kendrick then reflected on the first table read for Pitch Perfect in 2011. “2011, Table read for the first Pitch Perfect. After we finish, I make a dumb joke about how if there were a bunch of sequels (little did I know) there would be that one character that stayed on even when the rest of the cast wasn’t doing them anymore,'" she continued. "I said, ‘Well the *character* would be Benji... but Ben is never gonna do it because that kid is gonna be a f*cking superstar.’ At this point, I hadn’t even heard him sing yet.”

She continued, “And now, Ben is just fulfilling his destiny as the person who is too talented, too hard working, too joyful, too full of light to not become one of the most exciting and true artists on the damn planet. I’m so proud to know him and happy to have spent such a magical night watching him OWN Radio City Music Hall.”

Kendrick and Platt both starred in 2012’s Pitch Perfect and 2015’s Pitch Perfect 2 as Beca and Benji, members of rival A capella groups who compete against each other in college. Platt didn't appear in the third installment of the film in 2017, but he’s kept busy since then. He starred in the critically-acclaimed production Dear Evan Hansen during its Off-Broadway debut and subsequent Broadway run between 2015 to 2017, a title role that garnered him a Tony Award in June 2017. On March 29, he released his debut studio album, Sing to Me Instead. He currently headlines Ryan Murphy’s Netflix political satire The Politician, which premiered on Sept. 27.

Platt’s recent concert at Radio City Music Hall serves as the final leg of his concert tour for his debut album, which kicked off in May in Illinois. The event had been filmed for an upcoming feature-length special for Netflix, according to Playbill. At the show, Kendrick was also joined by Pitch Perfect alum Brittany Snow, who depicted fellow Bellas A capella member Chloe, in the films. On her Instagram Story on Sept. 29, Snow shared a series of clips of Platt performing at the show.

She captioned the clips, "@bensplatt is the truest definition of these two things: 1) good things happen to good people. (like the most good of people) 2) if you are truly good at what you do and you are truly authentic in who you are...you are magical."

This Pitch Perfect reunion is a reminder of just how supportive these movie costars are.

More like this
'Dirty Dancing's Jennifer Grey Wants Harry Styles To Be The Sequel’s Love Interest
By Grace Wehniainen
Laura Dern Said “Cultural Awareness” Made Her Rethink This 'Jurassic Park' Fact
By Grace Wehniainen
Hayden Panettiere Will Return For 'Scream 6': "We F*cking Won, Scream Fam"
By Jack Irvin and Jake Viswanath
Sandra Bullock, Girlboss Extraordinaire
By Matt Harkins & Viviana Olen
Get Even More From Bustle — Sign Up For The Newsletter