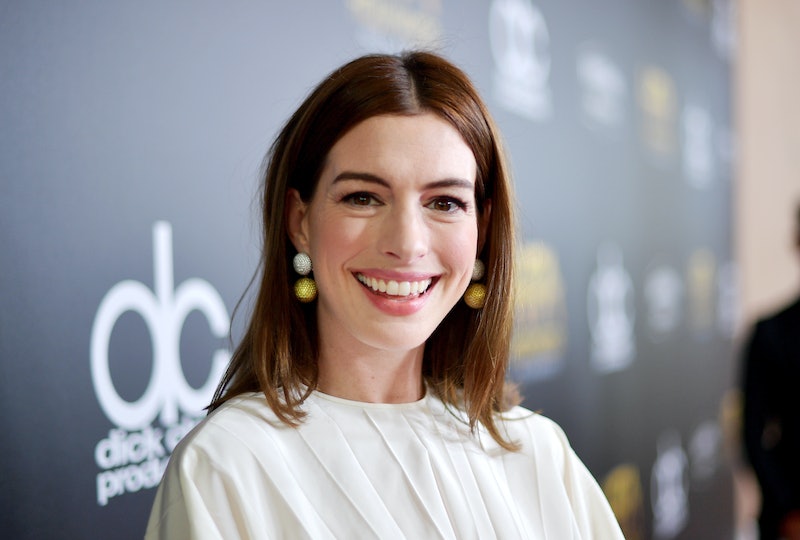 As Samuel L. Jackson's Jurassic Park character says, "Hold on to your butts!" This beloved Hollywood actor is set to turn 70 in a few short days, and he recently celebrated this milestone with a pre-party of epic proportions. Among the many stars in attendance for Samuel L. Jackson's birthday party was Anne Hathaway, according to a video she posted to Instagram on Dec. 19. The clip was accompanied by a very fitting caption that Jackson would undoubtedly enjoy.

While he doesn't technically turn 70 until Dec. 21, Jackson's party went down on Dec. 16 at Cipriani 42nd Street in New York City, as per Page Six. Laurence Fishburne was there, as was Whoopi Goldberg. Spike Lee and George Lucas both snagged invites, and the Judge Judy was reportedly there tearing up the dance floor. Priceless.

Hathaway's Instagram video captured the moment that the whole crowd broke into "Happy Birthday," which was led by none other than Stevie Wonder, R&B legend extraordinaire. The clip begins with a quick shot of Hathaway's clearly elated face, and then pans to Wonder performing onstage.

As the always-climactic chorus of the song quickly approaches, Hathaway whips the camera around to focus on Jackson himself. It's a little wobbly — assumedly because she was bopping around to the beat — but you do get to see a few short seconds of Jackson getting his birthday boogie on. It's pretty adorable.

"Happy motherf*cking Birthday @samuelljackson!" Hathaway captioned the clip. "We [heart emoji] u!" Jackson is renowned for his association with the aforementioned curse word, which is why what Hathaway wrote on Instagram was the epitome of perfect.

In fact, Jackson is so well-known for his on-screen use of the word in various grammatical forms, that one outlet tallied and subsequently put together an impressive super-cut of each and every instance. As of July 29, 2014, the actor has said "motherf*cker" 171 times in 27 different movies, according to Huffington Post. He's appeared in at least 13 films since then, though, so it's safe to guess that number will soon reach 200 — assuming it hasn't already.

Believe it or not, there's actually a super sentimental story behind Jackson's fondness of that word in particular. During a 2016 interview on The Howard Stern Show (as per GQ), the actor struggled with a stutter for most of his childhood. "I stuttered really, really, really bad for a long time," Jackson admitted, "to the point that I stopped speaking for, like, almost a year in school."

He then went on to explain how he eventually found a cure: by constantly dropping the f-bomb. When asked by Stern why, exactly, he thought the word proved helpful, Jackson replied, "I have no idea. But it just does. It clicks a switch that stops the d-d-d-d, b-b-b-b." And now, my friends, we've achieved full circle.

So, great job with that birthday shoutout caption, Anne Hathaway. Nothing could have been nearly as fitting. Oh, and happy birthday, Samuel L. Jackson. You're a motherf*cking national treasure.