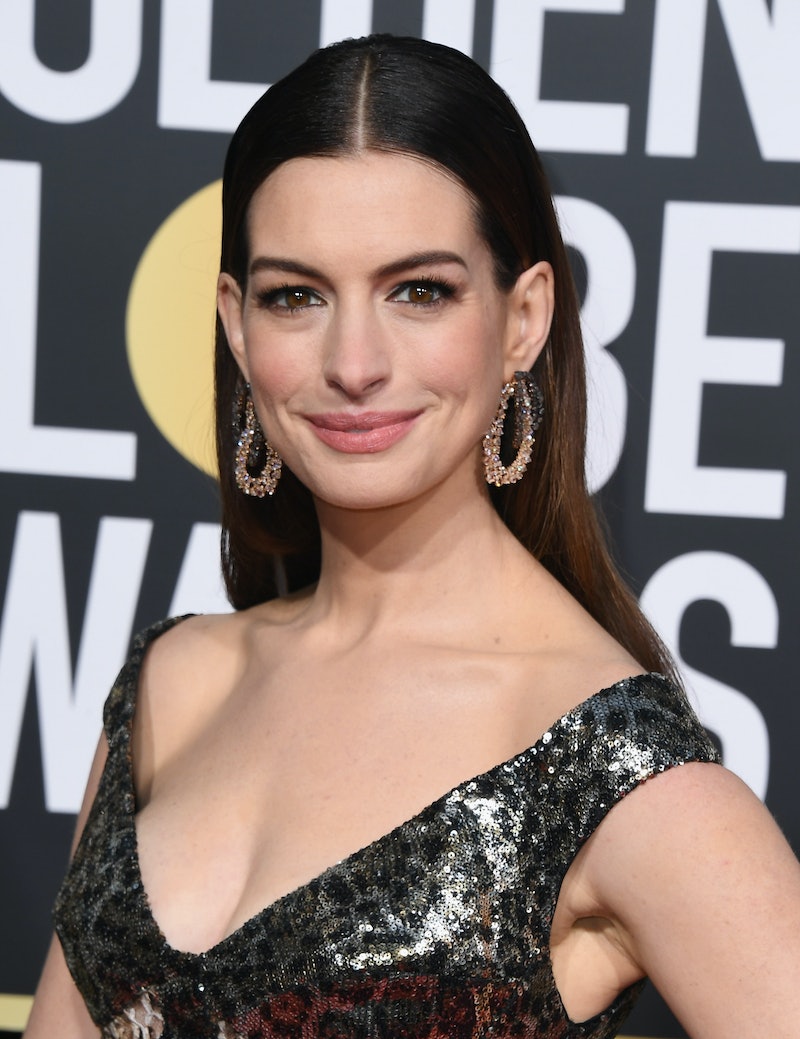 Just because an actor isn't nominated for an Academy Award, doesn't mean they can't get in on the awards show fun. Anne Hathaway posted an Oscars throwback photo, poking fun at her own turn hosting the 2011 event. "No matter what happens with today's show, just remember, it's already been worse," Hathaway wrote on Instagram, captioning a photo of her and James Franco co-hosting in 2011. She added, "Happy Oscars!"

Hathaway might be ready to joke about it now, but her time hosting the Oscars in 2011 wasn't always something she could laugh about. Hathaway and Franco's job co-hosting has been torn apart over the years, and history hasn't been all that kind to it either. At the time, The Hollywood Reporter called it "spectacularly unwatchable." And even though most critics, as noted by THR, gave Hathaway credit for at least trying to be entertaining, a stark contrast to Franco who seemed to be doing the absolute least, the 2011 Oscars is widely seen as the worst Oscars in recent memory. Of course, that all may change tonight.

Just as the 2011 Oscars did by hiring two actors as hosts, the 2019 Academy Awards is also bucking tradition, this time foregoing the host altogether. So, no matter how self-deprecating Hathaway's throwback post is, it might not actually be true after tonight.

Hathaway has been more open about her infamous Oscar hosting as of late. In January, the actor revealed that it was Franco who convinced her to take the job in the first place, telling People, "Hey, can I dish some tea? I turned that gig down and James is the one that convinced me to do it." She went on, saying that the entire show and backlash that ensued did teach her one important lesson. "When all the dust settled, I was just like, 'You gotta be kidding me. Your first instinct is usually the right one.'"

That said, looking back on her Oscars debacle, Hathaway now has a sort of laissez-faire attitude. "It's just a no-win situation. You're not trained at this, how is this going to enhance your life?" She added that no matter how well hosts perform at the Oscars, they never succeed in pleasing everyone. "Even the people who do it spectacularly well — like Hugh Jackman, Jimmy Kimmel, Ellen DeGeneres — usually just get a 'meh' from everyone. It's a really hard gig to stick the landing on."

Franco has also addressed the backlash they received for the 2011 Oscars. In a 2016 interview with New York, Franco defended their performance, saying that there was plenty of blame to go around. "I think one of the things that happens in film and television and performance-based things is that people will criticize the performers because they're the face of the piece," he noted, per E! News. He noted that the two actors did not have a big role in writing the script for the awards, something a comedian hosting might have been more invested in.

Regardless of how people remember the 2011 Oscars, it's nice to know that Hathaway can see the humor in it now. Besides, now eight years later, and with an Oscar win of her own, she's the one having the last laugh.