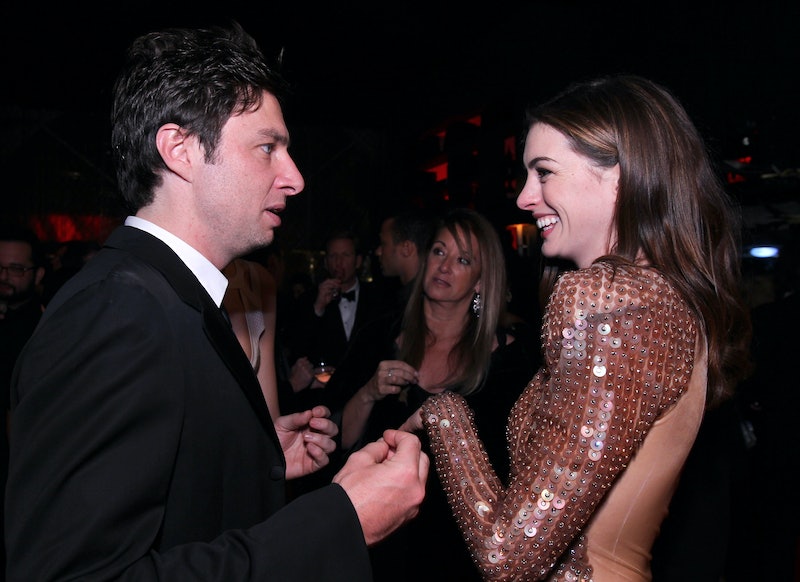 Les Miserables was an important film for many, especially Anne Hathaway, who took home a Best Supporting Actress Oscar for her role as Fantine. But it also caused a nearly horrific moment for attendees at the 2012 premiere. Speaking on his new podcast, Zach Braff recalled an awkward encounter with Anne Hathaway — or more specifically, her father — at the premiere of Les Mis that will send you into a mid-2000s gossip spiral.

Braff told the unlikely story while appearing on the Fake Doctors, Real Friends podcast with his Scrubs co-star Donald Faison. "I know Anne Hathaway as an acquaintance," he recalled. "I’m walking towards her to say congratulations. Her father stands up and gives me this look like: ‘I’m going to kill this motherf*cker. He’s got the balls to crash my daughter’s premiere? I’m going to strangle him!'"

It turns out, he thought Braff was actually his daughter's ex-boyfriend Raffaello Follieri. And we can't blame him, given that the two were constantly being compared to one another, with their similar facial structures and hair-dos. her dad had good reason to be mad if it were in fact him. Hathaway and Follieri dated for four years before breaking up in June 2008, just two weeks before Follieri was arrested and charged for defrauding investors out of millions of dollars. That October, he pleaded guilty to counts of wire fraud, money laundering, and conspiracy, and was sentenced to four and a half years in prison.

When Hathaway's dad realized that "Follieri" was just a harmless Braff, he was very relieved, according to the actor. “I got within 10 feet [of Hathaway’s dad] and his face just f*cking broke, sighed with a breath of relief realizing it was me and not the ex-boyfriend,” he said.

Hilariously, Braff said it wasn't the first time that he was mistaken for Hathaway's con man ex — classic 2000s. But some instances were more memorable than others. “I see Arsenio Hall, and he’s looking right at me,” Braff said, recounting another close call in a coffee shop. “I was geeking out because I love Arsenio Hall. He brought me over to the end of the counter where they delivered the coffees. And there, you can hear the music, is Eddie Murphy standing there.”

Never one to mince words, it was Murphy who asked the important question: “Anybody ever tell you you look like Anne Hathaway’s boyfriend that went to jail?” Hey, at least he wasn't asked if he was "that guy from Scrubs."

More like this
Anne Hathaway’s ‘The Devil Wears Prada’ Anniversary Post Turned Political
By Brad Witter
Kimberly J. Brown & Daniel Kountz Looked Back On Their ‘Halloweentown’ Romance
By Stephanie Topacio Long
All The Sneaky Lindsay Lohan Movie Easter Eggs In Her New Ad, Explained
By Stephanie Topacio Long
The 'Hocus Pocus' Sequel Finally Has A Release Date & It Makes Total Sense
By Shannon Barbour and Radhika Menon
Get Even More From Bustle — Sign Up For The Newsletter