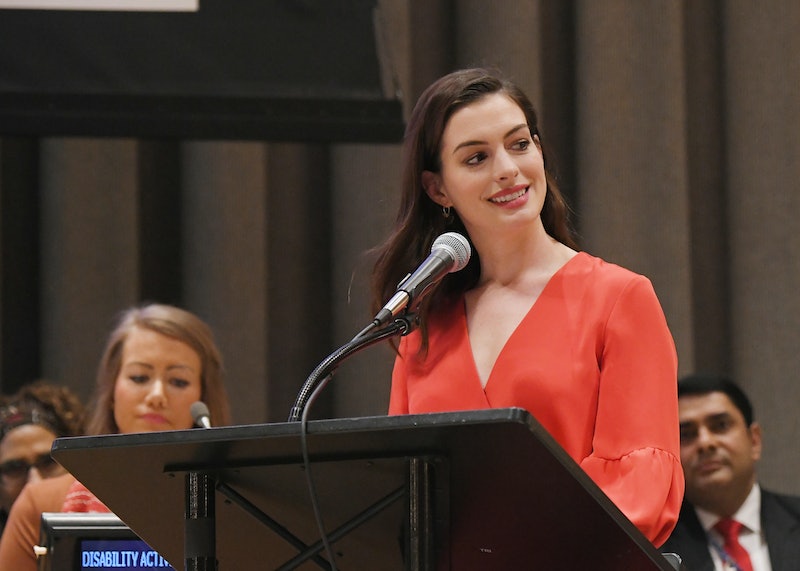 International Women's Day gave the world a chance to reflect on not only what A Day Without A Woman would feel like but also to grasp the unconscionable challenges women face daily. From attaining proper healthcare to balancing a career with being a mother, women are constantly approaching difficult to jump over hurdles. However, actor Anne Hathaway told the United Nations that the debilitating effects of the stereotype that women are sole caregivers and homemakers causes more harm to families than society may realize. During an impassioned speech on Wednesday, March 8, the U.N. goodwill ambassador highlighted how her mother's experience as a homemaker and her father's as the sole breadwinner shaped her as a child.

"My mother had to choose between a career and raising three children, a choice that left her unpaid and under-appreciated as a homemaker because there just wasn’t support for both paths...The assumption and common practice that women and girls look after the home and the family is a stubborn and very real stereotype that not only discriminates against women, but limits men’s participation and connection within the family and society."

The 34-year-old also noted how parental leave was just not economically feasible. According to the Family and Medical Leave Act by the Department of Labor, "certain employees" receive "up to 12 weeks of "unpaid, job-protected leave." Although some companies offer maternity pay, only about 14 percent of Americans receive paid family leave, according to the Bureau of Labor Statistics. As an Academy Award-winning actor and new mother to her son, Jonathan, Hathaway found herself faced with a similar balancing act as her mother. "Somehow we, and every American parent, were expected to be back to normal in under three months — without income?"

By noting the economic disparity and stereotypes facing women and men in the workforce, Hathaway shed light on the root of the greater issue: Not only do parental leave policies need an update but our mentality toward mothers and fathers must shift, as well.

Hathaway poignantly noted how the "motherhood penalty" is a harsh reality for working moms. "Women who can afford to take the full 12 weeks often don't because it will mean incurring a 'motherhood penalty' meaning they will be perceived as less dedicated to their job and will be passed over for promotions and other career advancement." It's as if mothers are being punished for being mothers! How dare they try to implement leadership skills by setting examples for their children or increase productivity by organizing schedules for their family.

In order to value women as mothers, the concept of being a father must change, as well. As Hathaway puts it, "redefining and destigmatizing men's roles as caregivers" will help society see women as equals. The actor also acknowledged the disparity of maternity leave when it comes to serving families with same sex parents. "[Parental leave] cannot, by definition, serve the world in which there is more than one type of family because in the modern world, some families have two daddies. How exactly does maternity leave serve them?"

Hathaway's powerful speech offers a lot of food for thought and a strong call to action for us all to help fight for change, starting with this way of thinking. Men who start families are capable of bringing more than food for the table and clothes on their kids' backs. Their presence, their care, and their love is just as necessary. Building a family does not begin and end with mothers doing most of the work.