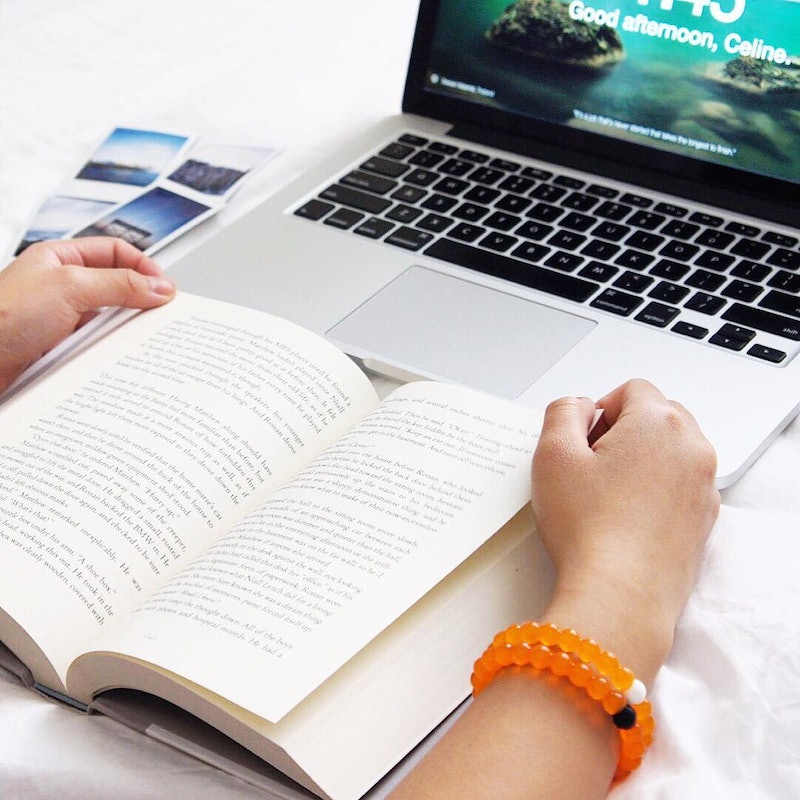 I am all too familiar with the specific, morbid feeling that I'm going to be physically crushed to death by the emails in my inbox. I realize this is not possible. They don't exist in physical form. But that's how it feels — it's overwhelming spiritually, mentally, and yes, physically. I realize this is a small problem in the grand scheme of things, but the phrase that gets me through these small moments of stress is the same phrase that gets me through big moments of agonizing grief and pain: "Bird by bird."

You probably recognize this ubiquitous mantra from Anne Lamott's Bird by Bird: Some Instructions on Writing and Life, the classic guide that can be found on basically every writer's bookshelf. The book, for the uninitiated, deftly and honestly explores the mental challenges of being a writer, and Lamott's advice is, simply put, invaluable: she implores writers to give themselves short assignments; she asks that people forgive themselves for "shitty first drafts." But the most memorable piece of advice in the book is one that carries over beyond writing. It's the piece of advice to which the book owes its title, and it originates in a moment in Lamott's childhood. She writes:

"Thirty years ago my older brother, who was 10 years old at the time, was trying to get a report written on birds that he'd had three months to write, which was due the next day. We were out at our family cabin in Bolinas, and he was at the kitchen table close to tears, surrounded by binder paper and pencils and unopened books about birds, immobilized by the hugeness of the task ahead. Then my father sat down beside him put his arm around my brother's shoulder, and said, 'Bird by bird, buddy. Just take it bird by bird.'"

Lamott uses this anecdote as a guiding principle for her writing practice, and she thinks about this story when she needs to "get a grip." And so do I. When I'm staring at a massive pile of urgent to-do items, I'll take a breath, literally say "bird by bird" out loud, and zero in on one piece of the puzzle. Even if it's something as small as checking my email.

But, it's not just on those days when my to-do list is killing me that I say "bird by bird" to myself. It's also in the big decisions. It's an obvious metaphor, but the future is not unlike a blank page — they are both open to too many possibilities to comprehend. It's why that classic job interview question "Where do you see yourself in five years?" can be so paralyzing.

When I moved to New York City after living in Austin for my entire life. I had grown up with an insatiable thirst for the city, but actually making the move had always seemed like a pipe dream.

After graduating from college, I was faced with that big, white sheet of paper: Where do I go? What do I do next? I decided to try New York City. When I broke it down — bird by bird — it was clear to me that New York was the first step in the journey. So, I filled out countless applications for jobs in publishing, and, while waiting to hear back, spent my time waiting for an opportunity to move to New York City. But that didn't happen.

Finally, I broke it down into steps, and just did them, one at a time. Step one: look for an apartment. Step two: find an internship. Step three: find a job. And of course, there were steps within those steps. Finding an apartment got broken down into researching neighborhoods, looking through Craigslist, emailing potential roommates. And so on, one bird at a time. Of course, this all involves tremendous privilege on my part. So many others would not have the opportunity to move to New York without a job or an internship or an apartment. For me, it was possible, but I needed to break it down.

It may seem like common sense to break a daunting task into pieces. But Lamott's "bird by bird" story is always just the reminder I need to take things a little more slowly and approach life a little more mindfully. In those moments when everything seems too large to comprehend, thinking about her "bird by bird" advice serves as an anchor for me. I tell myself, "bird by bird" and soon, everything is not quite as scary as it once seemed.

More like this
The BBC Is Adapting A Best-Selling Novel About A Mistaken Killer
By Darshita Goyal
These 25 International Horror Movies On Netflix Prove Fear Is A Universal Language
By Bustle Editors
10 Must-Read New Books Out This Week
By K.W. Colyard
Nicola Coughlan Shared A Lady Whistledown Excerpt From ‘Bridgerton’ Season 3
By Grace Wehniainen, Alyssa Lapid and Sam Ramsden
Get Even More From Bustle — Sign Up For The Newsletter